Cambodia has one of the youngest and fastest-growing populations in Southeast Asia. Today, the population is nearly 16 million. According to the World Bank, the country’s birth rate per 1,000 people decreased slightly, from 28.1 in 2000 to 24.1 in 2014.1 With economic growth and improvements in people’s livelihoods and health, the life expectancy of the population is increasing, meaning people live longer than they did in the early period of the post-civil war.

Civil documents include certificates of birth, marriage and death. As the authority in their locality, commune/sangkat councils are in charge of civil status documentation. All Khmer citizens have duties to request registration of their civil status in civil status books.

Those providing false information or requesting multiple registrations in the same place or in many different places may face fines and punishment under the law.

When there is a new birth, parents have a duty to report to the local authority in the area of their permanent residence for registration of the birth in the birth registration book within 30 days. In other circumstances, parents are also able to make a petition for birth records and attestation of their children at commune/sangkat. Birth certificate and birth attestation are issued to the baby for free.2

The documents that you need to bring to commune/sangkat offices for the registration include:

The babies can be named by fathers, mothers or guardians. The baby’s family name may be taken from: 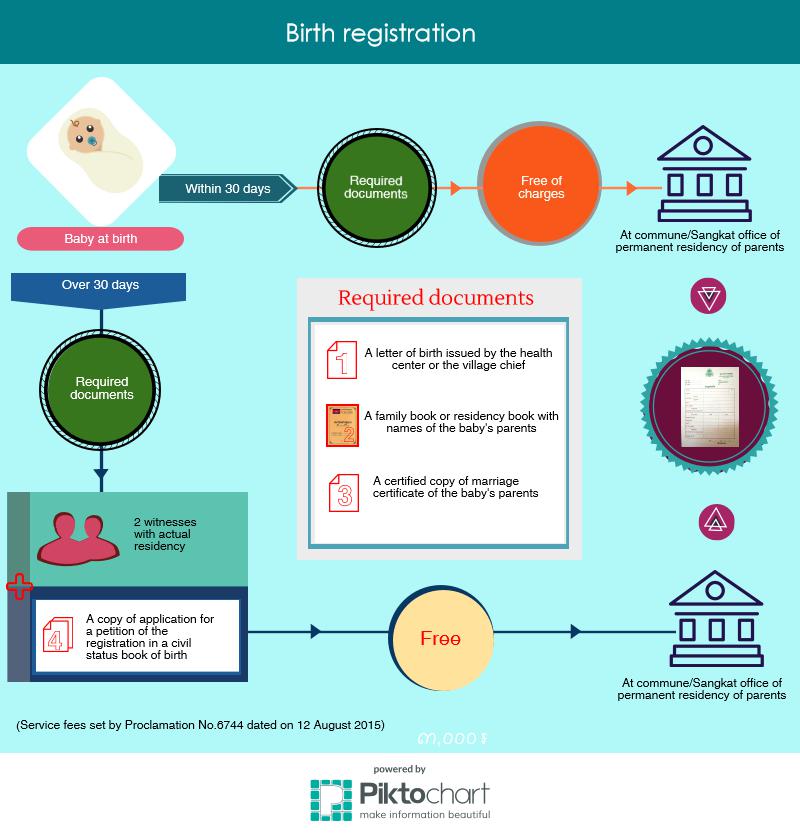 A man and a woman who are willing to get marriage shall submit the application request to the civil registrar of the commune/sangkat in the woman’s residence. Both parties must be at least 18 years old. If one of them is 16 or 17 years old, they cannot get married unless there is consent from parents or guardians of the minor. Same sex marriage, marriage with somebody mentally ill or marriage between close relatives are all banned. Marriage between Cambodians and foreigners is governed by separate laws and regulations (There is a sub-decree on marriage between Cambodians and foreigners).

To request marriage registration, the intending bride and groom bring before the civil status officer the following documents:

Once the documents are received, the civil status officer of the commune/sangkat thoroughly considers and checks the application before issuing a marriage announcement. 5 copies of the marriage announcements will be produced for posting and depositing at residences and commune/sangkat halls of the bride-to-be and groom-to-be. If there is no objection to their marriage within 10 days after the public announcement, both parties may request their marriage be registered in the civil status book and the certificate of marriage issued.

To request official registration of the marriage and the certificate of marriage, the bride and groom-to-be bring before the civil status officer two witnesses of marriageable age with their National identity cards, or family books, or residence books.

The most senior family member, relative, neighbor or colleague of someone who has died reports the death to a civil registrar at the commune or sangkat of the deceased person’s permanent residence. In general, the death registration and certificate is done free of charge during 15 days after the death. In the case more than 15 days, the family member or relative must make a petition to a commune/sangkat chief of the deceased person’s permanent residence. The petition for the death record and registration incurs a fee is for free.3 A regional death certificate and a copy of the death certificate, upon request, shall be issued to a reporter or petitioner of the death.

The civil registrar considers two circumstances: the suspicious or non-suspicious death.4 If a person was died of ordinary illness, senility, natural disaster or other accidents with no suspicion of crime of murder, the civil registrar shall issue a permission letter for cremation or burying the corpse. If the death is caused by a contagious disease which may put society in danger, the responsible officer shall report immediately to (public) hospitals or sanatorium to prevent a disease outbreak (Article 35 of the sub-decree). If a person’s death caused by a motive suspicious of a crime as murder, the registrar officer or a person concerned shall report the issue immediately to the competent authorities in the deceased person’s locality for investigation (Article 36).

To register a death in the civil death registrar book, a person who reports the case shall bring necessary documents before the civil registrar officer:

The Importance of civil status registration

“Civil status is a joint relation which attaches nationality to the State and specific status of a person in his/her family line, in society and creates his/her rights and obligations.5”

The registration certificate of each civil status may serve not only for the purposes of establishing each person’s relationship with a particular country or the family but also as means of recognising their socio-economic and political rights and duties. Under the 1993 Constitution of the Kingdom of Cambodia, these rights include: rights to vote or stand as candidates for an election, rights to education and to work with equal pay for the same work, rights to justice and fair trial, and rights to ownership. National identity cards6 and passports,7 the most important means of identification for the implementation of these rights, are established from the registration and documentation of civil status.