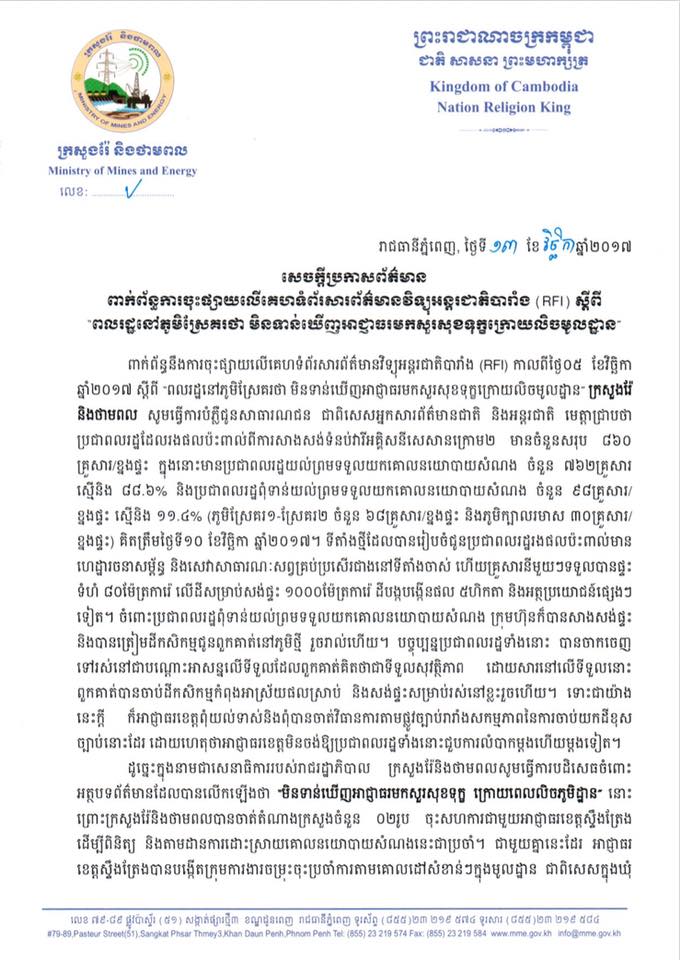 On 13 November 2017, The Ministry of Mines and Energy issued a press statement regarding the news published on the website of Radio France Internationale (RFI) titled “Residents of Srekor village said there is no any local authority visiting them after flooding their village”, on 05 November 2017. Regarding to this, the Ministry would like to clarify to the public, especially local and foreign journalists that till 10 November 2017, the residents affected by the construction of the Lower Sesan 2 dam in totally 860 families, in which residents accepted compensation policies 762 families, equivalent to 88.6%, and residents had not yet accepted the compensation policies accounted for 98 families, or 11.4% (Srekor 1-2 and Kbal Romeas villages).​ Currently, residents have gone to live temporarily on the area where they feel safe, and they grabbed land for agricultural purpose and some of them has already built the residential for living as well. However, the provincial government is not willing or taking any legal action to the activity of this illegal land garbing. For the residents who refused to accept the compensation policy, the provincial authorities of Stung Treng province has established the Joint Task Force for key targets areas, especially in Sre Kor and Kbal Romeas villages in order to be ready to help transport people and property of the residents from flooded areas to higher ground where they want to go. The ministry has also emphasized that due to the purpose of reserving water for producing electricity, the water reservoir of the Lower Sesan 2 hydropower dam will not be opened, so water levels will remain constant and the village continues to sink.

 Ministry of Mines and Energy