Storms, flooding and drought are the disasters that affect the largest number of people in Cambodia, and they also bring the highest cost. Climate change is likely to make things worse, with drier dry seasons predicted and more rainfall and violent storms in the wet season. 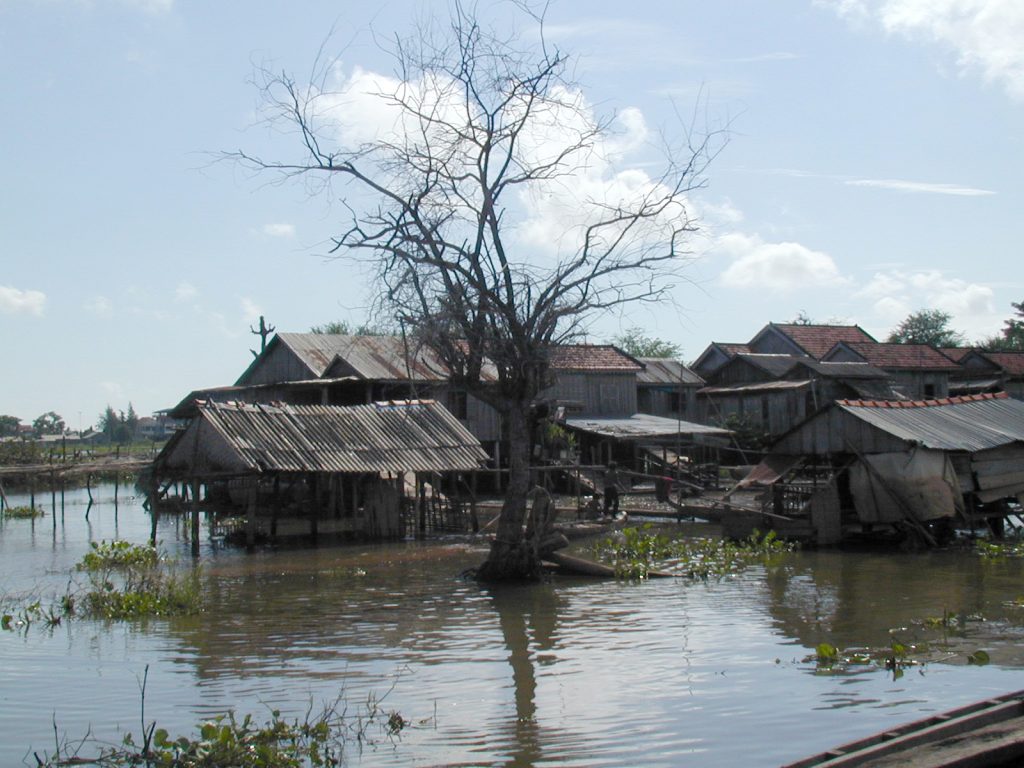 Pandemics have the potential to affect large numbers of people too, although recent threats, from SARS to bird flu, have not had a large impact on the wider population.

A significant part of Cambodia takes the form of a vast floodplain, and localized flooding is common each year in the wet season (approximately May–October).There are advantages to this, such as improved soil moisture and fertility, recharging surface and underground water stores(storage), and some benefits to fisheries.

Serious flooding causes serious problems, however. The National Committee for Disaster Management (NCDM) estimated that flooding in 2013 caused more than $355 million in damage across agriculture, infrastructure and people’s homes.1 NCDM reported that the floods affected 377,354 households and 1.8 million individuals living in 20 provinces. The floods killed 168 people, the majority of whom were children.2

In the worst flooding cases, public services such as education and health care delivery cannot function properly.3Infrastructure such as road, water and irrigation systems and electricity distribution (where they exist) can be damaged or destroyed, adding to long-term impacts. Shrinking agriculture production after the 2013 floods was estimated to have reduced Cambodia’s GDP growth by over half a percentage point.4

Flooding in 2000 affected almost 3.5 million people, including 85,000 families (387,000 people) temporarily evacuated from their homes and villages. There were 347 deaths, and total physical damage was estimated at US$150 million.5

Disasters such as floods do not affect everyone equally. Those particularly at risk or those who suffer most include casual laborers, farmers, children (who make up the majority of deaths), the elderly, very poor or indebted households and female-headed households.

While there is an overlap between disasters caused by flooding and storms, storms cans also cause particular sorts of damage such as destruction of homes by strong wind and rain and deaths by lightning.

Lightning strikes killed 108 people and injured 105 in 2016.7 The fatalities were similar to 2015 (107 deaths and 77 injuries) but well above 2014, (75 deaths and 55 injuries).8 Cambodia’s rate of death by lightning average across years has been estimated at 7.8 deaths per million people, one of the highest lightning death rates in the world.9 On some occasions, five or six or more people can be killed in a single week. 10

Drought is second only to flooding in the damage and losses it can cause. Drought is cause by a late, short or erratic rainy season, or lower than average rainfall overall. This century there have been especially serious droughts in 2002, 2003, 2004 (the longest and most damaging until 2006) 2006 and 2016. The drought in 2016 was regarded the most severe for many decades, however, affecting almost the whole country. In March 2016, for example, the Mekong river was 30–50% lower than its average level for that time of year.12 In May 2016, the National Committee for Disaster Management said that 2.5 million people in Cambodia were directly affected by drought. 13

Meteorological data indicates that there are shifts in the regular timing and intensity of the wet and dry seasons, with longer, drier dry seasons and shorter more intense wet seasons. This results in more frequent and intense floods and droughts.14

The changing climactic pattern brings enormous implications for agriculture and fisheries, with the potential to threaten food and water security.

The threat of pandemics affecting Cambodia is expected to rise due to urbanization, environmental changes, increasing tourist arrival numbers and the emergence of new or more virulent diseases.

Some diseases such as dengue fever present an ongoing risk, while the threat presented by others, such as that from Severe Acute Respiratory Syndrome (SARS) in 2002, rise and fall.

Avian flu virus was first detected in poultry in Cambodia in January 2004 and found in a person in January 2005.15 Since then, the country has reported 56 human cases of the virus, 44 of them in people under 14, and 37 people have died.16,17The virus currently presents a relatively small risk to the population as a whole, but could become much more serious if the virus changes to make human-to-human infection possible.

Cambodia worked to prevent ebola from entering the country during a severe outbreak of the disease in parts of West Africa in 2014, with new arrivals at Phnom Penh and Siem Reap airports given information about the disease symptoms and asked to fill in questionnaires about their health and international travel movements.

There were 553 fires reported in Cambodia in 2018 and 514 in 2017 according to the National Police Commission.18 The Association of Fire Prevention Enterprises of Cambodia, in cooperation with the Ministry of Interior, developed and introduced the National Fire Safety Systems Code for builders and building owners.

Fires can bring disaster to both urban and rural areas. The closeness of urban housing means that once a fire develops it can rapidly spread to destroy dozens of homes. A fire destroyed 97 houses in Phnom Penh’s Meanchey district in February 2016, for example.19

In many cases the deaths and damage from fires reflect a lack of effective construction standards in Cambodia. For example, in September 2015 five women were killed in a fire at a nightclub in Phnom Penh. The fire is believed to have been caused by faulty wiring.20

Rural fires are common. A cooking fire that wasn’t put out is believed to have been the cause of a blaze that ultimately burnt more than 2,000 hectares of Prek Toal protected area in Battambang in May 2016, for example, destroying the breeding sites of multiple endangered species.21