Biodiversity​ or​ Biological​ Resources:​ Various​ organisms​ in​ the​ same​ or​ different​ species​ and​ living​ organisms​ of​ all​ levels​ and​ sources,​ including​ land,​ marine​ and​ freshwater​ ecosystems,​ and​ the​ ecological​ relationships​ in​ which​ these​ ecosystems​ exist.​1​​ Biodiversity is essential for most of the resources used by humans, such as food, shelter and fuel. The Executive secretary of the Convention on Biological Diversity used the following definition:2

“Biological diversity underpins ecosystem functioning and the provision of ecosystem services essential for human wellbeing. It provides for food security, human health, the provision of clean air and water; it contributes to local livelihoods, and economic development…In addition it is a central component of many belief systems, worldviews and identities.”

Biodiversity is essential to anyone, despite not always being visible in cities, because it directly contributes to human wellbeing.3 The consequence of biodiversity loss are startling, and are being compared to those linked to climate change.4

Cambodia possesses some of the most valuable biodiversity in South East Asia. Its forests still hold (although in decreasing numbers) threatened species such as the Siamese crocodile and Asian elephant that are no longer found in the wild in neighboring countries.5

Biodiversity is not easy to assess, given there are different classifications measuring different variables, including species, ecosystems and genetic varieties, among many others.6

Ecosystems and species form a complex web of interaction. Weakening one at the benefit of another affects the balance. Professor Michel Loreau7 uses the example of a loss of a population of sea otters, which would lead to an increasing population of sea urchins, which would itself threaten a population of seaweed. This situation would lead to endangering species living within the seaweed ecosystem, while increasing coastal erosion that was prevented by seaweeds, a consequence directly affecting human life and livelihoods.

Species depend on their local environmental conditions for survival – what we refer to as ecological niches. When a given species experiences a change, that affects its surroundings. In general terms, the more species there are, the less important is the change caused by one species’ loss. The strongest ecosystems are the ones where there is a large biodiversity.

Any threat to biodiversity is a potential threat to people’s livelihoods and lifestyle sustainability. Although rarely recognized, it is of equal importance for rural people as are the impacts of industrial activities in the long-run.8 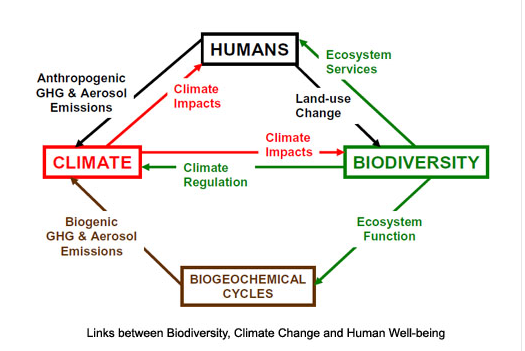 Much of Cambodia’s biodiversity is still being discovered at an extraordinary rate.

It is highly likely that a large number of plant species still remain to be found. For example, 620 ferns have been identified in Thailand and 714 in Vietnam, yet only 217 in Cambodia so far. Cambodia also has many biodiversity hotspots – areas where there is not only wide biodiversity but also a significant number of species under threat. Data are not always consistent. IUCN established a list of known species in Cambodia in 2010.11

The major threats for biodiversity in Cambodia are:12

Apart from strict environmental protection, working for poverty reduction is one of approaches that can be taken to lower environmental pressures.14 Stresses on livelihoods are partly caused by environmental resource degradation. Livelihood coping strategies vary depending on the household’s income – the more income, the less vulnerability to environmental variations. High-return activities allow farmers to use less land. Rural livelihoods in general may switch towards off-farm activities in order to reduce environmental exploitation, an approach that can be encouraged through education or social networking.

Although threatened, biodiversity protection is addressed by the Royal Government of Cambodia, diverse NGOs and local communities. Part of their work will be focused on the biodiversity elements in two of the United Nations Sustainable Development Goals: Goal 14 Life below water and Goal 15 Life on land.

Some areas of important biodiversity have legal protection, such as Mondulkiri’s Seima Biodiversity Conservation Area and the Central Cardamom Mountains Protected Forest.

Apart from the legal structures of protected areas, a common protection means is an agreement signed between the Royal Government of Cambodia and NGOs to implement specific projects for nature protection.

Other important areas such as Prey Lang – the largest lowland evergreen forest in Cambodia, and one of the largest in the Indo-Burma region – gained protection only recently. Prey Lang stretches over four provinces – Kratie, Kampong Thom, Stung Treng and Preah Vihear.

Cambodia is especially rich in forestry resources, although deforestation remains a threat.15 Regarding forestry, ecological classification is different from legal forest classification. In Cambodia, forests are, along with coastal areas and rivers and lakes, the main reservoir of biodiversity.

The Royal Government of Cambodia and Wildlife Conservation Society signed a project agreement in 2016 to use US$ 2.6 million generated through a carbon credit trade involving the Disney company. This money will be used for conservation purposes in Keo Seima Wildlife Sanctuary. Carbon credits are a potential source of finance for conservation in Cambodia.16

Biodiversity protection is addressed in many ways by the Royal Government of Cambodia.

On February 1995, Cambodia signed the Convention on Biological Diversity. In 1997, the Convention on International Trade in Endangered Species of Wild Fauna and Flora (CITES) was ratified, followed the same year by the development of the National Biodiversity Strategy and Action Plan.17

This opened the way to the National Environment Action Plan 1998–2002,18 addressing four issues:

In June 2009, the Royal Government of Cambodia signed an agreement with Terra Global Capital, a technical support/ecosystem services brokering company. The hope is that the agreement will reduce deforestation, thus reducing carbon dioxide emissions by 8.5 million tons in the course of 30 years. Resulting from this agreement, there are now 13 community forest tracts in Oddar Meanchey and one in Mondulkiri Province that are being managed as pilot REDD+ carbon-offset projects.

Steps are being taken to make environmental policy more comprehensive. The 2008 Law on Protected Areas replaced a previous one from 1993, with more specific guidelines. An environmental code is currently being drafted and should better match international standards, as well as ensuring better environmental protection.

The protection of biodiversity is specifically addressed in both of the government’s key guiding development policy documents, the Rectangular Strategy Phase III and the National Strategic Development Plan 2014–2018. Both talk about biodiversity in the context of striking a balance between development and conservation.1920

A lack of enough people skilled in conservation management has been identified and is being addressed in a number of ways. For example, at the Royal University of Phnom Penh, the Centre for Biodiversity Conservation trains and supports Cambodian scientists.21