As a fast-developing nation, Cambodia has always found poverty one of its main challenges. The Rectangular Strategy states that eradicating poverty has long been one of the Royal Government of Cambodia’s (RGC’s) highest priorities.1 Since the country’s first major post-civil war election in 1993, Cambodia has seen remarkable growth and economic development.2 The Kingdom has implemented structural reform policies to liberalize the economy and bring it into regional and global markets.3 The Government has also reformed trade policies and provided favorable foreign investment incentives and tax exemption to boost the economy.4 These have resulted in rapid economic growth and poverty reduction.5 According to the World Bank, Cambodia has maintained average annual growth of 7.7 percent since 1998.6 The country has been recognized as one of the fastest-growing countries in the world. Cambodia graduated to a lower-middle-income country in 2015 and has set a target of becoming an upper-middle-income country by 2030.7 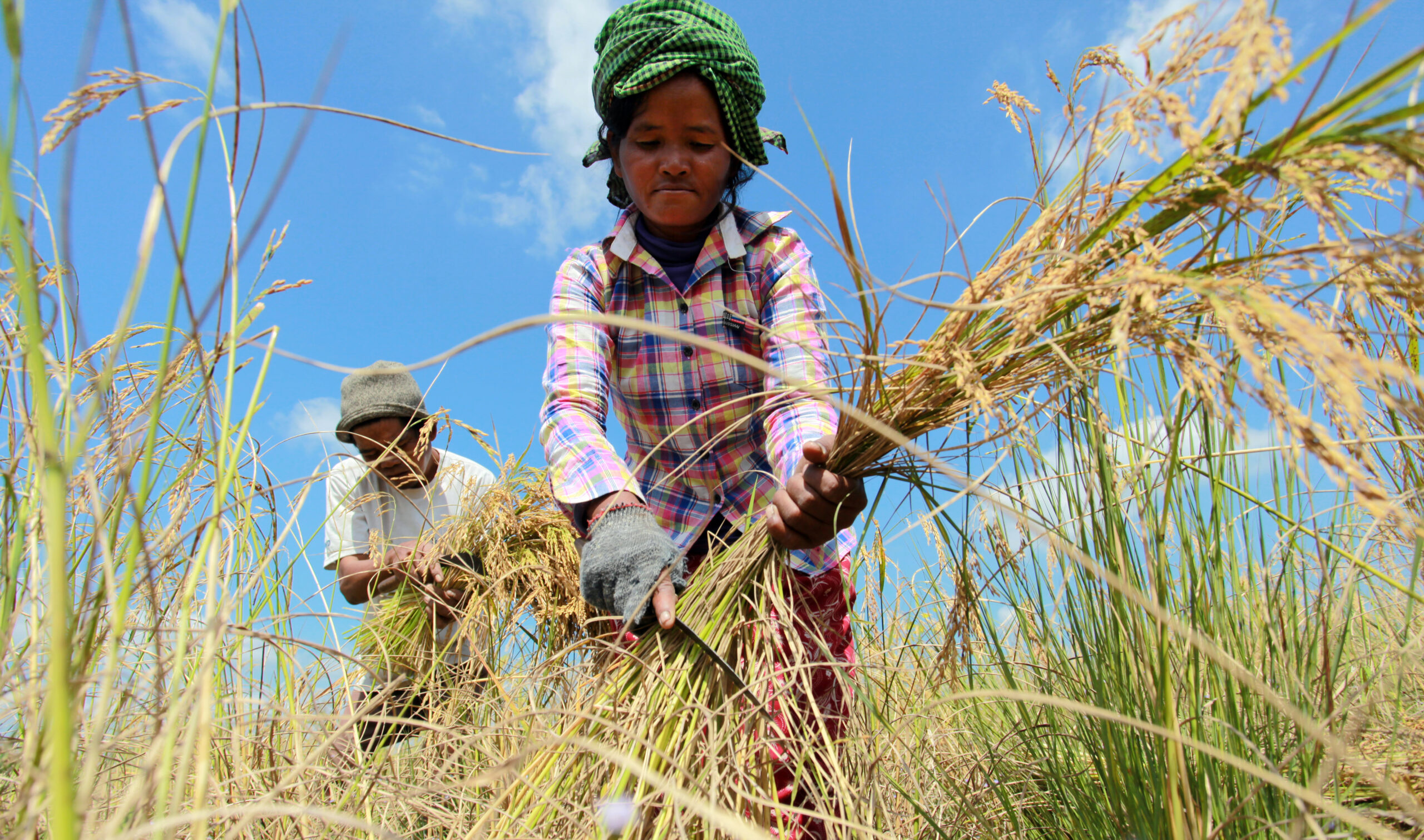 A Cambodian farmer gets her first harvest with her husband. Photo by World Bank, taken on 12 December 2014. licensed under CC BY-ND 2.0.

This growth has contributed to a substantial decline in the poverty rate. In 1993, the poverty rate in the country was around 39 percent.8 By 2014, the poverty rate had dropped to 13.5 percent. 9 The number dropped even further, to 9 percent by 2019.10 Even though poverty is continued to decrease, the bottom 40 percent of the population is not doing well.11 Robust economic growth is benefitted the non-poor more while leaving urban poverty unchanged.12

The RGC has recognized that poverty in Cambodia is multidimensional, not limited to income inequality.13 Other dimensions of poverty are the lack of opportunities, capabilities, good governance, and social exclusion.14This indicates that poverty still exists and policies and regulations will play an essential role in addressing the challenges.

Cambodia Sustainable Development Goals 2016-2030 (CSDGs) result from the localization and the integration of the SDGs to respond to Cambodia’s needs and context. The drafting and development process of the framework began in 2015 and was approved by the Council of Ministers in 2018. CSDGs consist of 18 goals, 88 nationally relevant targets, and 148 indicators. Seven of the goals are aligned with the SDGs, with one additional goal centered on demining landmines and EWR. This framework represents Cambodia’s main development goal and sets a baseline in each indicator for other relevant development policies to follow.

The first goal of CSDGs is to end poverty in all its forms everywhere. Clustered in the first goal, three achievable targets and ten indicators are identified as necessary components for process monitoring actions. Those three target includes:

In a similar fashion, Rectangular Strategy Phase IV is an effective national policy instrument that offers various poverty reduction strategies to transform the livelihoods of the poor. The four areas of focus (which explain the word ‘rectangle’ in the strategy’s title) are human resource development, economic diversification, promotion of the private sector and employment and inclusive and sustainable development.

The National Strategic Development Plan 2019–2023 offers a more comprehensive approach toward poverty reduction by taking the four areas of focus mentioned in Rectangular Strategy Phase IV as a roadmap. The NSDP 2019–2023 identifies indicators, frameworks, and priorities for implementation. It also indicates the key responsibilities of the relevant ministries and agencies to monitor and evaluate the implementation processes.

The RGC has fully recognized the importance of education as a mechanism to increase and accumulate human resources and capital, which contributes to eliminating poverty and narrowing social gaps. The Constitution states in article 68 that Cambodian citizens are entitled to access nine years of education for free. This underpins the Government’s push for universal access to education. Not entirely focusing just on access, education reforms also aim to improve education quality and promote inclusive education for all to ensure that everyone receives the same quality education.

The Government and the Ministry of Education, Youth and Sport (MoEYS) implement numerous policies and guidelines to enhance children’s access to education and education quality. The Education Strategic Plan and Cambodian Education Roadmap 2030 are the core strategic framework. The two medium term education policies that MoEYS has adopted to ensure that it aligns with the RGC Rectangular Strategy are15:

Over the last decade, Cambodia has done well in improving its education sector.16 Figures show that 97.7 % of all eligible children had access to education by 2016.17 Student dropout and repetition rates have declined. In the 2018–2019 school year, the primary school dropout rate was 4.4%, while the repetition rate stood at 6.6%.18 Primary schools are available in all areas of the country, including in remote and rural areas, which means students can get to school.

The United Nations’ Committee on World Food Security defined food security as “all people, at all times, have physical, social and economic access to sufficient, safe and nutritious food that meets their food preferences and dietary needs for an active and healthy life.”19 Food security is vital for human capital development.

As a dominant agricultural country, Cambodia does not face extreme food security yet.20 Given that almost 80% of Cambodia’s population lives in rural areas, around 65% are farmers and depend heavily on agriculture, resulting in inadequate food for their daily consumption.21 However, there are​ still people living in remote areas with limited access to sufficient nutrition.22 It is reported in the DHS 2014 that malnutrition remains high among Cambodian children under five. 32% of the children population do not grow properly to their height, 24% are underweight, and 10% are considered wasted.23 Approximately 22% of the population cannot afford a healthy diet despite robust economic growth in the last two decades.24

CSDGs goal number two is dedicated to ending hunger, achieving food security, improving nutrition and promoting sustainable growth. There are 5 indicators and 7 achievable targets clustered under this goal. Children under the age of five, women, the elderly, and vulnerable groups are prioritized to achieve the goal. The five indicators consist of:

It is reported in the Cambodia’s Voluntary National Review 2019 that the progression of indicator 5 is ahead of its expected achievement, while there are no data for the other four indicators.26 The report also addresses challenges of the implementation of CSDGs goal number two, such as the fast-changing context of development, including population growth, urbanization, socio-economic context, climate change, diet quality of pregnant women and children under the age of 5, the lack of public budget for investment, rise in women and child-bearing age obesity and the requirement for diversified agricultural products and protection of the natural resource. 27

Development partners and Non-Governmental Organizations have also addressed food security challenges. The food and Agricultural Organization of the United Nations (FAO) have actively provided technical support to Cambodia’s Government to improve agricultural productivity and enhance safe and nutrition‐sensitive food systems for poverty reduction and food security.28 Also, USAID has introduced a program called Feed the Future which primarily focuses on enhancing agricultural productivity and supporting the sustainable management of natural resources.29 Unicef has also shown notable achievement by collaborating with the Ministry of Health and national and local level partners to emphasize access to quality and affordable health and nutrition services.30

Poverty reduction is highly associated with adequate social protection policies. The long-term vision of RGC is to establish a financially sustainable system that can serve as an effective tool to tackle poverty, promote equality and enhance human capital development.31 In 2017, the Government established the Social Protection Policy Framework (SPPF).32 The policy framework aims are: “harmonizing, integrating and strengthening existing schemes and expanding the social protection floor to respond to all contingencies throughout the lifecycle.” Two main pillars at the core of the framework are social assistance and social insurance.33

Social assistance supports the most vulnerable group of people and is divided into four main categories: emergency response, human capital development, vocational training and welfare provision to the most vulnerable people.34 Three groups of poor and vulnerable people who are entitled to receive benefits from social assistance programs are people who live below the poverty line, people who live close to the poverty line and vulnerable groups including infants, children, pregnant women, family with food insecurity, people with disabilities and elderly.35 The Social Health Equity Fund (HEF), Food Reserve Program, Nutrition Program, Scholarship Program and School Feeding Program are the social assistance programs implemented so far.36 Among all, Social Health Equity Fund is the largest social protection intervention that provides benefits and health care to no less than 2 million vulnerable Cambodians. 37

The social insurance system or social security system consists of five primary components: pension, health insurance, work injury insurance, unemployment insurance and disability insurance.38 The social security system requires its members to pay contributions to the Government based on their income level. For those who cannot pay the contribution on their own, the Government will handle the cost.39 Established in 2007, the National Social Security Fund (NSSF) is the focal point for providing further social protection schemes for the public and private sectors.40 NSSF oversees various social security schemes such as employment injury insurance and social health insurance for private-sector workers and civil servants, and pensions.41

The Ministry of Planning has established the IDpoor program in 2006 to further support the poverty reduction campaign. The program aims to reduce duplication of resources and improve the identification of poor households for different poverty reduction measures.42 It is supported by the German and Australian governments and implemented by German Development Cooperation Agency (GIZ).43 All rural areas across the country are covered since 2013.44 Around 63% of all development programs in Cambodia are using IDpoor data in 2015.45  The statistic shows an increase from 42 projects in 2012 to 136  in 2015.46

IDpoor program is a process that identifies poor households in rural areas through its standardized questionnaires and procedures. Two poverty categories will be identified based on questionnaire scores including Poor level1 (very poor) and Poor level2 (poor).47 The program has provided useful regularly updated information on poor households and their poverty level to all relevant policymakers, governments and non-government agencies to further identify services, assistances and beneficiaries to those that are poverty-stricken. During the COVID-19 pandemic, the government has distributed approximately 291 million dollars to around 700,000 IDpoor households through the government Emergency Cash Transfer program.48