Biofuel crops have a significant potential for contributing to future energy requirements worldwide. Agricultural lands offer energy farming as an alternative to their usual role of food production. Biofuel crops are an environmentally valuable means of sustainable energy production.1 The demand for transport fuels in Cambodia is expanding, while the awareness of the environmental cost of fossil fuels is increasing and initiating more concern. Given the land areas available, producing biofuel offers an attractive opportunity for Cambodia.2

The cultivation of crops that can produce bioethanol such as sugarcane and cassava is increasing.3 Cambodia’s existing energy infrastructure and the prevalence of jatropha, another important biodiesel crop, make biodiesel a viable fossil fuel alternative.4 Biofuel supply in 2017 contributed to more than 90% total renewable energy sources. However, as a source of renewable electricity capacity, biofuel’s share in 2019 was just 3% of the total.5 The difference is a reflection of the fact that to date, biofuel is traditionally used on a domestic level in households and not used on a commercial scale to generate electricity.

Biofuels are made from the conversion of biomass into liquid or gaseous fuel. Liquid biofuel can be mixed with or substituted for fossil fuels. There are three main forms: straight vegetable oils, bioethanol and biodiesel.

Considering the characteristics and requirements of biofuel crops, there is limited land for oil palm trees, which need a tropical forest climate with an annual rainfall of over 3,000 mm. Within this range, only Koh Kong Province and Sihanoukville, with an estimated 3,512 mm and 2,937 mm, respectively, qualify. 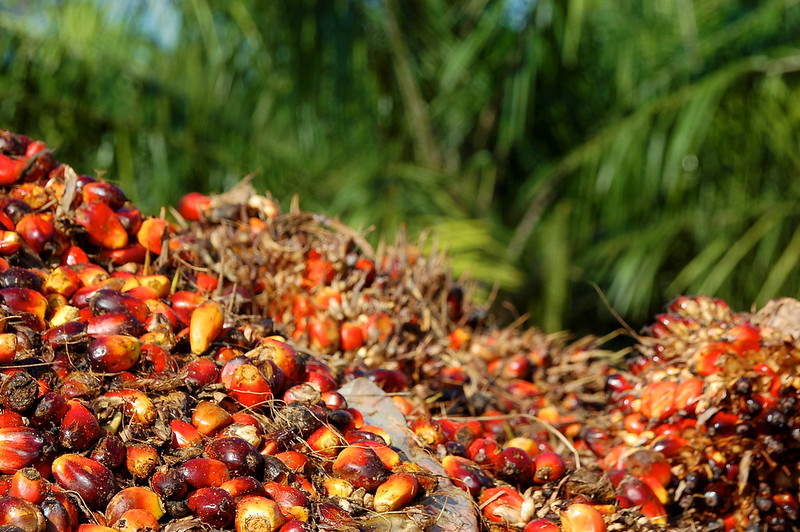 However, Jatropha is not challenging to grow, its rainfall requirement is 300-1,500 mm per year while Cambodia’s average rainfall range is 1,000-1,500 mm per year. Jatropha is being grown in Kampong Speu, Battambang, Banteay Meanchey, Prey Veng, Siem Reap, Kampot, Kep, and other provinces. Sugarcane, however, typically needs irrigation. Its growing areas therefore will be limited to areas where irrigation systems are accessible.7

The energy content of jatropha oil is similar to diesel oil and the biodiesel produced from it can be substituted directly in most diesel engines. Major production of jatropha oil for biofuel has been hampered in part by a lack of suitable technologies and failed investment programmes.8 However, some rural villages use jatropha oil as an energy source. In Bot Trang and Poy Char, Banteay Meanchey Province, 80 households and 360 households, respectively, get electricity from a mini-grid exclusively using jatropha oil.9 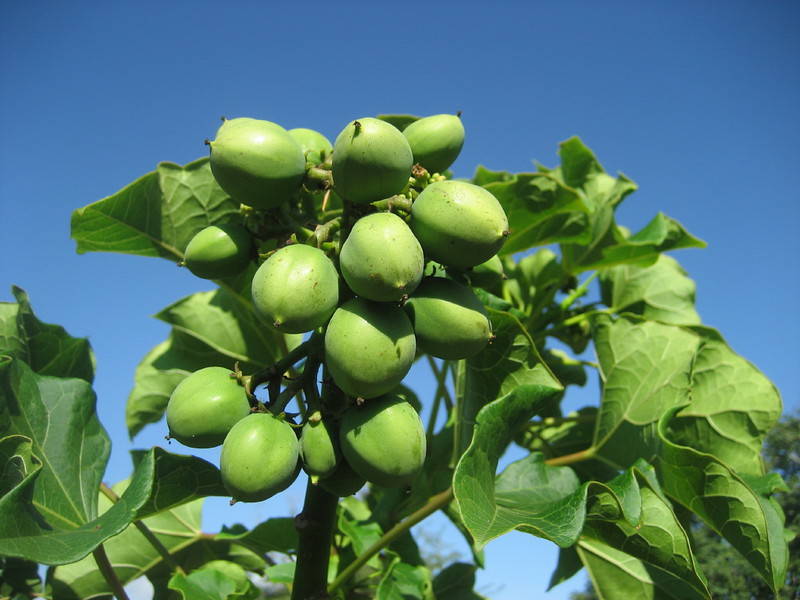 Fruit bunch on naturalized tree of Jatropha, a promising biofuel plant. Photo by Ton Rulkens, taken on May 01, 2009. Licensed under CC BY-SA 2.0.

A staple food crop among the global poor in tropical and subtropical regions, cassava is a plant that produces a root high in carbohydrates that can survive in drought and poor soil. The plant also has relatively few pest and disease problems when grown in Southeast Asia.10 Traditionally grown on a small scale by poor farmers, cassava has been historically difficult to cultivate in mass because it is grown from stem cuttings that are difficult to handle and preserve. Cultivation of cassava is also highly labor-intensive. Increased demands for cassava worldwide are expected to lead to technological changes in the cultivation of the root.11 Today, cassava is grown in Battambang, Pailin, Banteay Meanchey, Kratie, and Kampong Thom provinces. It is planted in May and harvested between November and the end of February each year.12 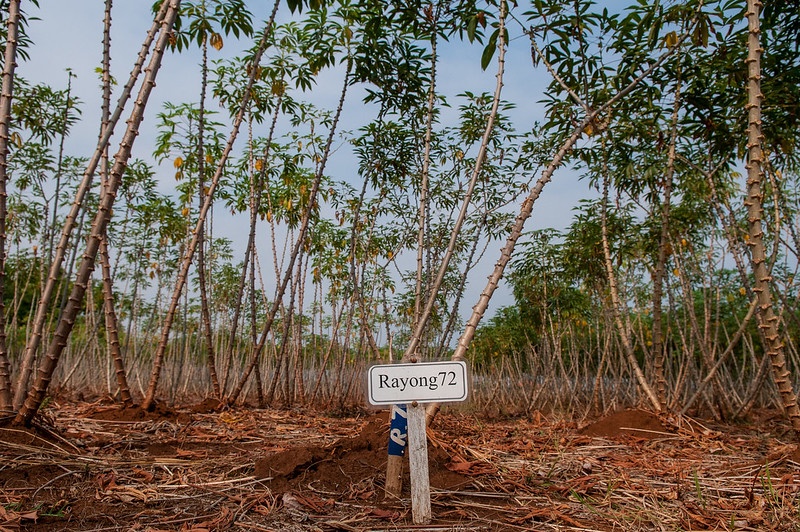 Cambodia has approximately 16,000 ha of palm oil palms,13 1,000 ha of jatropha, and 20,000 ha of sugarcane. Additionally, 36 million liters of bioethanol are produced annually from cassava under a joint project with a Korean company, MH Bio-Energy Group.14 The country has significant potential to produce large volumes of both biodiesel and bioethanol, of an estimated 182 million liters and 257 million liters, respectively.15

The Mong Reththy Group (MRG) planned to construct a US$16 million crude oil palm refinery in Sihanoukville to replace their existing, smaller-capacity refinery. In 2013, the company estimated that production of crude palm oil would increase to 22,000 tonnes, and by 2014, 16,000 ha of palm trees had been planted.16 In 2020, the estimated yields reached 270,000 tonnes, but a figure of up to 300,000 tonnes is possible. MRG previously exported its products to Thailand and Malaysia, but now ships to the European market.17 Hong Kong-based North Asia Resources planned to buy 14,000ha in Pursat Province for more than US$52 million to produce cassava that will supply a 100,000 metric ton per year ethanol plant.18

Although ethanol is produced in Cambodia using products like cassava and sugarcane, most is exported.  For example, Korean company MH Bio-Energy produces approximately 36,000 tonnes per year of ethanol from 100,000 tonnes of cassava for export to Europe.19 A Japanese company, Idemitsu Oil & Gas, is currently conducting a study to ascertain whether a cassava-fueled plant can be built in Battambang Province.20

Government policy regarding biofuels appears to be divided between two ministries: the Ministry of Agriculture, Forestry and Fisheries (MAFF) and the Ministry of Mines and Energy (MOME). As part of its plan to meet Cambodia’s electricity demand, the MOME will “…foster development of all types of renewable energy such as biomass, biogas, biofuel, etc...” In the area of agricultural research and development, MAFF will “…conduct research to develop technologies and approaches towards sustainable land management and determine plant nutrient requirements for bio-energy crops.”22

However, there are significant risks and concerns associated with biofuels crops. Increased incentives to invest among corporations and lack of property titles among rural Cambodians expose many to the risk of land grabs.25 Forest loss in the sub-region has been a severe challenge to biodiversity, with over 9 million hectares of forest being lost in the last 2 decades. The main driver of forest and biodiversity harm is the expansion of agricultural land.26 Some biofuels crops such as cassava and sugarcane are staple food crops, and diverting them to the production of biofuels lowers food supplies and increases food prices.27