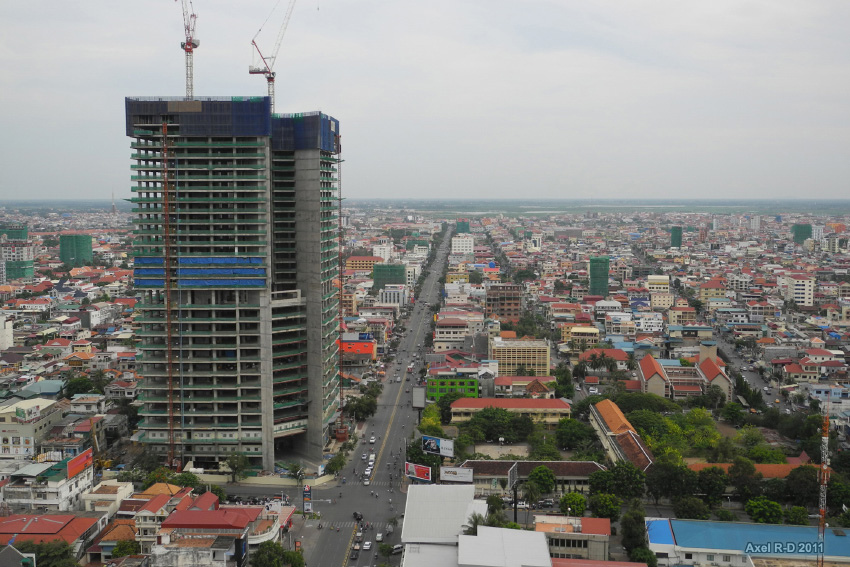 Construction on a Phnom Penh tower block. Photo by Axel Drainville, taken on 4 May 2011. Licensed under CC BY-NC 2.0

The construction industry has boomed in Cambodia. From 2000 to November 2018, Cambodia’s Ministry of Land Management, Urban Planning and Construction approved 43,136 construction projects representing an estimated investment capital of more than US$43.3 billion.1

Most of the money going into construction projects is locally sourced, with China accounting for most of the foreign investment. From January to April 2019, for example, the Ministry of Land Management, Urban Planning and Construction approved construction investment projects valued at approximately US$ 2,742 million.3 Foreign investment made up about US$367 million of that, with Chinese investors accounting for approximately US$315 million of that in turn. The Ministry said it had 226 Chinese construction companies registered with it, and 61 from ASEAN countries.4

Together with garment manufacturing, tourism and agriculture, construction is one of the four key sectors supporting Cambodia’s economic expansion. 5 World Bank estimates show that construction and real estate represented 2 percentage points of the 7.1 GDP growth in 2014, making the sector the single largest contributor to growth.6

The boom is changing the shape of Cambodian cities. In early 2019, real estate companies in Phnom Penh estimated that the total number of condominiums in the city would jump by 120% in the course of the year.7 The biggest jump would be in the high-end sector, with estimates of unit numbers more than trebling from 3,093 at the start of the year to an astonishing 10,611 by the end. In the affordable sector, the estimated growth would be from 3,530 units at the start of the year to 7,057 by the end. The smallest increase – still a reported 78% – was in the midrange segment, where there would be 13,444 units at the end of the year. Rents are expected to fall.

Even greater than the changes in Phnom Penh are the changes to Cambodia’s coastal lands, particularly around Sihanoukville and Kok Kong. Large developments, often backed by Chinese investors, are transforming the landscape. As an example, Union Development Group Co Ltd. reportedly has a project covering 45,000 hectares of Kiri Sakor district and Botum Sakor in Koh Kong province. The project includes tourism resorts and complexes, a port and an airport. The investment is reportedly US$4 billion.8

The boom is taking place despite the fact that obtaining building permits is more expensive and takes far longer than many other countries. Concerns have also been voiced around building standards and construction site safety.9 These issues may be at least partly addressed in a new overarching construction law currently being drafted.

Laws around land and construction

Foreigners can also own condominiums on the first floor or higher in a building up to a maximum of 70% of any one apartment building, provided that the building has obtained a strata title. Foreigners cannot own ground floor properties.

The key building law currently in place is the Law of Management and Planning of Urban Construction (1994). There are 50 articles governing the process of applying for and granting building permits. These articles are implemented by Royal Sub-decree 86 on Construction Permits (1997), which gives people the right to construct buildings on their own land, and sets out the permit process. To make housing affordable and accessible to poorer people, small wooden homes do not need construction permits.10

There are over 20 steps in the process to get a building permit. Builders or developers must ask for information at the Department of Land Management, Urban Planning and Construction for their city or province and complete the forms.11 For cities, they have to go to the municipal department as well. Builders must have documentation of project architecture and engineering, land titles, and Khmer identity cards. The Ministry of Land Management is mandated to inspect and control construction projects. In 2014, there were 193 construction projects found to be without permits.12

Where there is a Master Plan or Land Use Plan in place, this may place restrictions on the size, type and purpose of a proposed construction.

Once a permit is issued, building must begin within one year, unless an application for an extension is granted. A certificate is issued when the building is completed.

By law, construction is subject to environmental restrictions and provisions on industrial pollution. There are also rules around building footprint: residential buildings must leave 50% of the surface area free while apartment buildings can occupy 75%.14 Industry observers have noticed, however, that “in practice such restrictions are discretionary.”15

The Ministry of Labor and Vocational Training issued two prakas (075 and 077) in 2011, setting out some guidance regarding sanitation, safety and information at construction sites. Despite this, many Cambodian construction sites remain high-risk environments.

In cases where large international companies are involved in construction of a commercial building, it is common for them to bring their own requirements and standards of construction, and rules for site safety.

A costly and time-consuming process

The World Bank studied the procedures, time and cost to build a warehouse in 190 countries, including Cambodia.16

A new overarching law for the building industry is being drafted.18 A focus of the law is practitioner qualifications (architects, engineers and builders), security and safety. The law may also hold construction firms liable in the event of building accidents.19 Laws and regulatory regimes for a number of countries were studied before the local law was drafted. A senior adviser to the government has said that there are around 300 articles in the draft.20

Other issues for construction

In practical terms, Cambodian architects and builders do not have to take account of the earthquake risk that Japanese builders face, or the cyclones and high winds of the Philippines. The major natural hazard they need to consider is flash flooding, and issues around ensuring good foundations.

The reliance on imported materials means that construction costs can be higher in Cambodia than Thailand or Vietnam.22

Women and children in the workforce

Of 700 people working on one large construction site in 2013, 300 were women.24 “Women probably represent up to 40% of the private construction sector workforce,” Van Thol, vice-president of the Building and Wood Workers Trade Union of Cambodia, was quoted as saying. 25 A number of commentators, including the Trade Union’s Interim President, Sok Kean, have reported that women laborers on building sites earn less than men.26

An investigation in 2016 by NGO Licadho found a number in instances of child labor in brick kilns, supplying key materials for construction.27 Child labor is illegal under Cambodian law and in contravention to Cambodia’s international commitments.