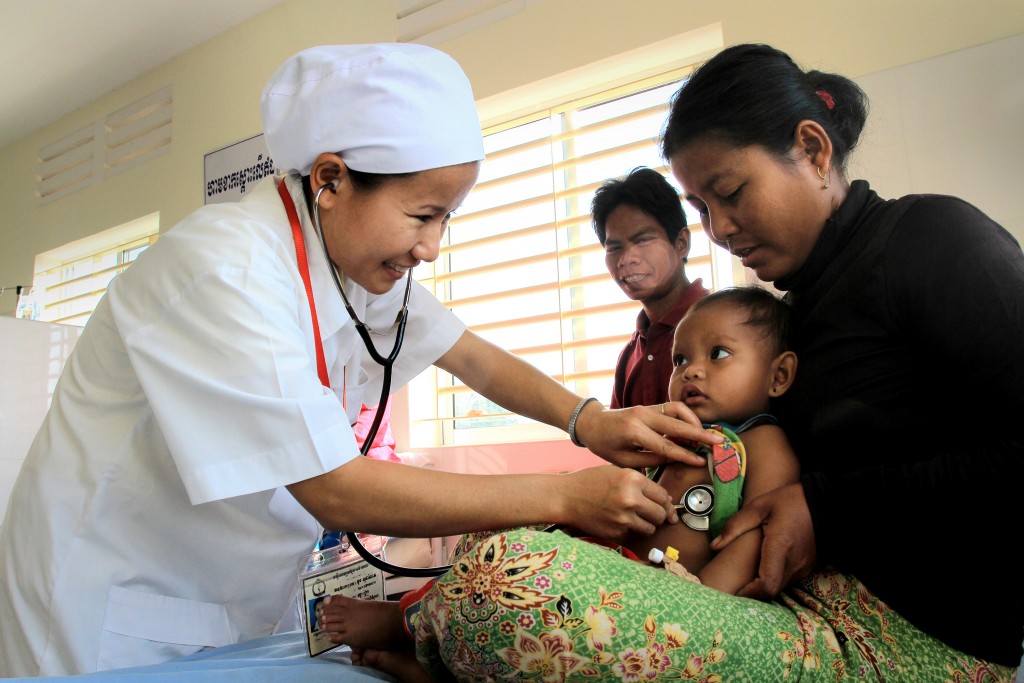 A trained medical staff listens to the heartbeat of an infant at 16 Makara hospital in Preah Vihear, Cambodia. Photo by The World Bank, taken on 30 January 2013. Licensed under CC BY-NC-ND 2.0.

Social development addresses profound social problems,1 especially poverty, unemployment and social exclusion, and seeks to define poverty across a spectrum of social and structural barriers instead of simply by income levels.

Cambodia has achieved a number of ambitious goals. It has reduced the maternal mortality rate by three quarters, income levels have grown and poverty levels have fallen and many health and education statistics have improved significantly.

Big challenges remain, however, such as the limited access many rural people have to health or education services, poor child nutrition and low levels of completion of secondary education.2

The Human Development Index (HDI) is a summary measure of average achievements in these areas. The 2017 measure for Cambodia places it in 146th place out of 189 countries and territories.4 Cambodia improved its HDI figure over the period 1990–2017 from 0.364 to 0.582. This considerable improvement is the result of some extraordinary trends over that period, such as:

Between 2004 and 2011, the proportion of people who live in absolute poverty—on less than US$1.15 per day—fell from 53 percent to 21 percent. Almost half of the rise was attributed to higher rice prices and increased production, which raised growers’ and farm workers’ incomes. A large number remain close to the poverty line, however, and therefore vulnerable. The number of people who live on less than $2.30 per person per day grew from 4.6 million in 2004 to 8.1 million in 2011.6

United Nations Development Program (UNDP) figures published in early 2017 showed that Cambodia’s Multi-dimensional Poverty Index (MPI) decreased from 0.211 in 2011 to 0.150 in 2014. The headcount ratio of people in multi-dimensional poverty declined from 46.8 percent to 33.8 percent in this period.7

There are indications that poverty has continued to fall in more recent years, although at a lower rate. The World Bank says economic growth has benefited the non-poor more, while urban poverty has stagnated. “Consumption per capita for the bottom 40 percent grew at 13 percent during 2013–17, while it expanded at 22 percent for the top 60 percent. The non-agricultural wage played a more significant role in reducing poverty during 2013–17, compared to 2009–13 period when household agriculture was the primary driver of poverty reduction.”8

By several measures, income inequality in Cambodia is broadly similar to that in many European countries, and considerably lower than the Unites States. For example, its GINI score (where 0 is perfect equality and 100 is perfect inequality) was 30.76 in 2012, while the United Kingdom and Ireland each had an estimated score of 32.5 and France 33. The score for USA in 2013 was 41. Income inequality has actually fallen in Cambodia, according to World Bank and United Nations figures.9

From the start of the 21st century, Cambodia has seen extraordinary economic development and social transformation. GDP per capita has gone up five times, from $302 in 2000 to $1,512 in 2018.10

While all these factors are improving, Cambodia’s ranking in the 2018 Global Hunger Index was 78th out of 119 countries (where the 119th country has very high levels of hunger).16  This places it in the ‘serious’ category. Cambodia is one of 22 countries to where hunger declined by more than 50 percent in the years 2000–2016.17 By comparison, the level of hunger in the developing world declined by 29 percent.18

Progress is largely dependent on donor funding. Over the years 2000–2009, for example, development assistance for health grew at an average level of 11.3 percent per year, while over 2010–2015 the growth fell to just 1.2 percent per year.20 The areas of funding growth also changed, from HIV/AIDS, malaria and tuberculosis to maternal, newborn and child health.21

There are severe shortages of some types of services. Of the 111 referral hospitals in Cambodia only 21 offer ophthalmology (eye specialist) services. Of the 1,164 local health centres, only 331 provide basic eye care.29

By the start of 2018, Cambodia had 14,189 state and private schools from kindergarten to university level, Education Minister Hang Chuon Naron was quoted as saying.30

Enrolment rates for primary education stand at 97 percent. However, this high rate masks high dropout rates and poor quality education. Enrolment at secondary school level is considerably lower at an average of 57 percent. The mean years of schooling in Cambodia increased by just 0.8 years between 1980 and 2013, to 5.8 years.31

Upper secondary school (grades 10–12) saw dropout rates of 23.8 percent in 2015, but this fell to 19.4 percent in 2016. Education Minister Hang Chuon Naron said that some students leave school when they see job opportunities available.32

In January 2016 the government launched its first nationwide policy for child development, to be overseen by the Cambodia National Council for Children. The policy aims to reduce the student dropout rates and increase vocational training opportunities, among other things.33

In 2015 a joint initiative by government and civil society groups was launched to improve the quality of services provided in rural areas by commune councils, primary schools and health centers. Over 3,650 Community Accountability Facilitators (CAFs) work in 98 out of 159 (62%) rural districts, helping citizens get good service.36

Introduced in 2008, the National Social Security Fund (NSSF) is a government-run social security plan that covers workers’ work injuries, work-related illness and travel-related accidents.  Employers of entities registered with NSSF must contribute 0.8 per cent of employees’ gross wage to the NSSF. In early 2016, coverage was broadened to include a healthcare option (prakas 109).37 On 13 June 2016 the Ministry of Labour and Vocational Training issued prakas (220), setting out payments for the healthcare scheme. These require employers and workers to each pay 1.3 per cent of a worker’s monthly wage to the NSSF Fund,38 although for garment workers this will become fully the employer’s responsibility.

Starting in January 2018, female garment factory workers are entitled to a three-month maternity leave with 120 percent of their salary, with 70 percent coming from the National Social Security Fund and 50  percent from employers.39 A pension for workers in the garment sector was also due to be launched in 2019.40

While the Cambodian government has established a Cambodian Human Rights Committee (CHRC), this is not an independent body. When the CHRC was considering comments made by the United Nations Human Rights Council during its Universal Periodic Review in January 2019, for example, the CHRC issued a statement saying that it would only accept recommendations supportive of the Cambodian government.41 The UN’s Paris Principles covering the criteria for national human rights institutions state that to be effective they should have autonomy from government, guaranteed by legislation.42 The UN’s Special Rapporteur on the situation of human rights in Cambodia, Rhona Smith, was appointed in March 2015.43

There is considerable work underway to combat domestic violence in Cambodia. A report released in December 2016 by the Ministry of Women’s Affairs and the United Nations Population Fund (UNFPA) said that more than 30 percent of Cambodian women have experienced some form of domestic violence.44

In a 2019 report, Save the Children said that Cambodia has made great gains in reducing violence against children. “Since 2000, the latest data suggest Cambodia has cut its child homicide rate by 76 percent. The total number of victims fell from an estimated 210 to 50 per year during this time. Children in Cambodia are increasingly protected by improved national legislation and services to prevent violence and exploitation. Recent laws have strengthened the juvenile justice system and discouraged violence against children at home, in school and in institutional settings.”45