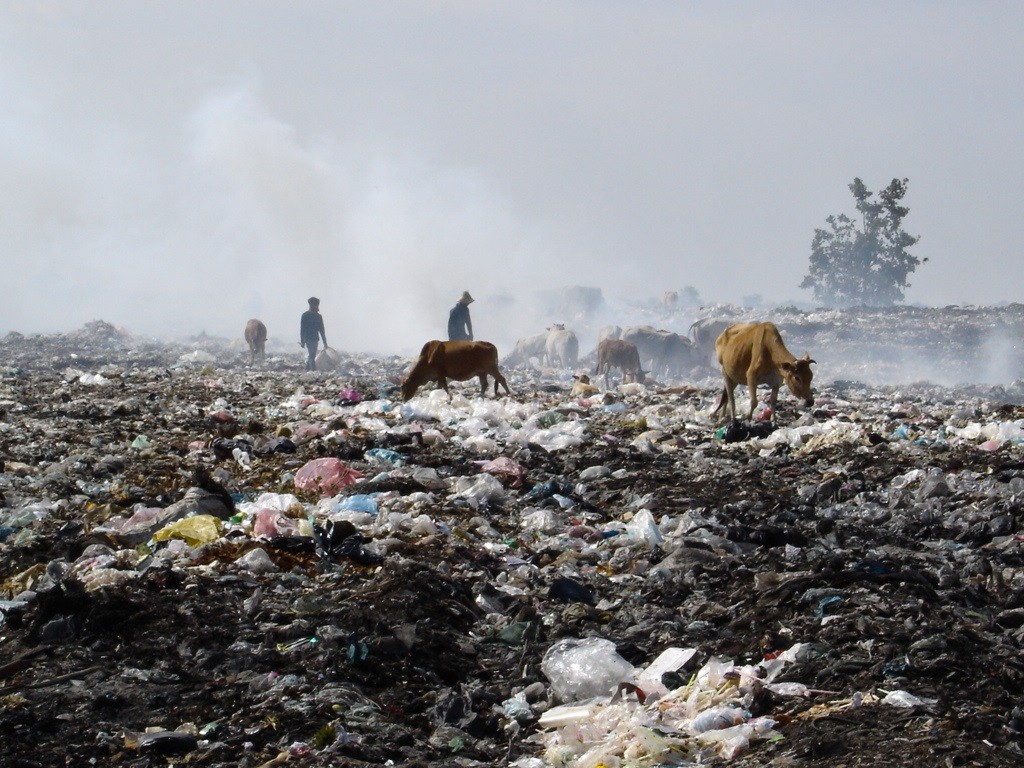 In Cambodia, burning waste remains a common practice, particularly in rural areas, due to the lack of dumpsites or waste collection services. It is still considered the easiest method of rubbish disposal.

In 2015, according to environment ministry spokesman Sao Sopheap, most of Cambodia’s dumpsites do not have proper separation of decaying and non-decaying wastes.1

According to a 2015 study conducted by the Institute of Technology of Cambodia and the Cambodian Education and Waste Management Organization (COMPED), Phnom Penh produced about 1,286 tons of solid waste per day in 2013.2 By 2030, it is estimated that this will more than double to 3,112 tons per day.3 The study also predicts that the city’s two remaining dump areas at the Dangkor landfill will reach capacity by 2020.4

Following this finding, at the end of 2015, The Cambodia Daily reported that Phnom Penh City Hall plans to build two new waste management sites in Chroy Changva and Chbar Ampov districts.5 However, it did not mention when the projects would start.

Solid waste management falls under the authority of Ministry of Environment.6 By law, solid waste management refers to transporting, storage, disposal and treatment of wastes. The ministry is responsible for creating laws, guidelines and rules for managing and inspecting wastes including hospital wastes, industrial wastes and hazardous wastes.7

Collecting, transporting, minimizing, recycling and dumping wastes is the responsibility of the authorities of each province and city. Implementation is monitored and inspected by the Ministry of Environment.9

In Cambodia’s capital city, the waste collection service is contracted between the Phnom Penh Municipal Hall and Cintri company. Phnom Penh generates around 4.09 million tonnes/year of solid waste.10 Household waste make up around 55.3% of the total, followed by hotels/guesthouses (16.7%), restaurants (13.8%), markets (7.5%), shops (5.4%) and offices (1.4%).11 Looking at type of waste, around half (51.9%) is food and other organic waste, one-fifth (20.9%) plastic and one tenth (9.9%) paper. Dangkor is the main landfill site, receiving approximately 808,530 tonnes of waste per year. A rough estimate suggests that about 59,715 tonnes of greenhouse gases are emitted from the landfill each year.12

On March 2015, the government announced it would set up a US$5 million fund to allow sub-national government bodies to take responsibility for waste management in their cities. This initiative is coordinated by the environment, economy and interior ministries and municipalities. Each sub-national authority is given decision-making power for contracting with private waste collecting companies.13

Given this initiative, in November 2015 a new sub-decree on urban garbage and solid waste management was introduced. It aims to strengthen and delegate the responsibilities of sub-national government on managing garbage and wastes in their municipalities. It details the responsibilities of concerned authorities including Ministry of Environment, Ministry of Interior and sub-national governing bodies. This sub-decree does not cover industrial and hazardous wastes.14

Mr Pok Sokundara, the secretary general of the National League of Communes/Sangkats (NLC/S), said in May 2016 that the NLC/S in collaboration with Konrad Adenauer Stiftung (KAS Cambodia) intended to help with training and capacity building in the decentralization of waste management.15

At the same time, Leng Vy, an under-secretary at the Interior Ministry, said that the ministry was preparing information about waste management for the general public. “I think that our country should fine people for littering because other countries have implemented strict rules on this issue.”16

Globally, the 3Rs approach is not new, but it remains an unfamiliar approach in Cambodia’s waste management. The organic and plastic wastes are mixed. Raising public awareness of the benefits of separating wastes is a significant challenge for the Kingdom. Studies say Cambodia has almost no recycling infrastructure. Some of its recyclable waste goes to Thailand and Vietnam for reprocessing.17

Two interesting initiatives have been launched in the 3Rs area:

A regional five-year project aiming to improve waste management was launched in 2015. This project includes Cambodia, Philippines, Vietnam, Laos and Mongolia. The Global Environment Fund has earmarked US$7.5 million for the project. In Cambodia, this project will be undertaken by the Ministry of Environment, the United Nations Industrial Development Organization (UNIDO) and Phnom Penh Municipal Hall, and it will first be implemented in Phnom Penh’s largest dumpsite Choeung Ek.20