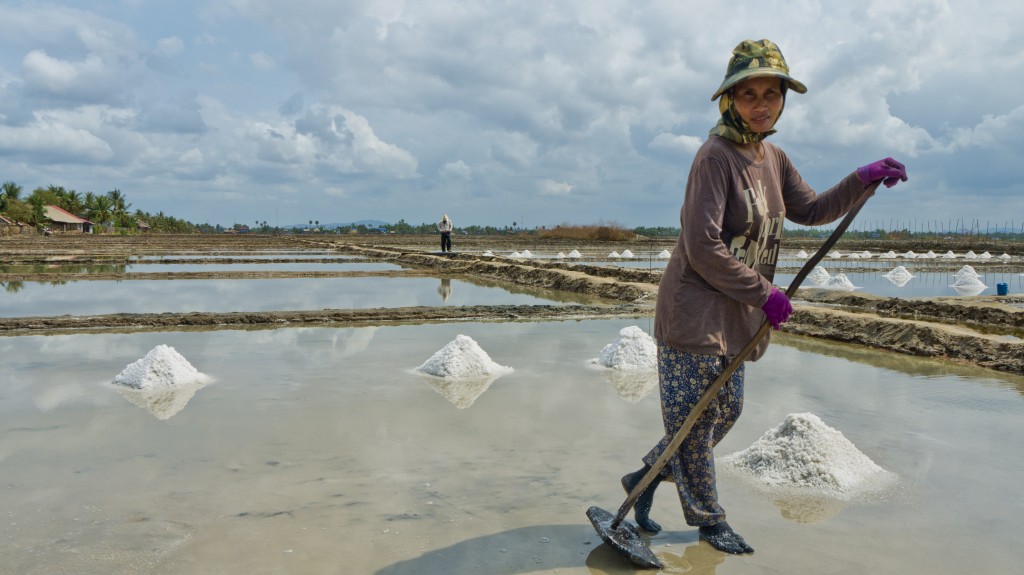 Woman working in the salt fields in Kampot. Photo by douglasjonesjr, taken on 28 March 2014. Licensed under CC BY 2.0.

Salt is produced in Kampot and Kep provinces, where seawater is allowed into salt evaporation ponds  As the water evaporates, salt crystals are left behind and harvested. Production levels depend largely on weather, with long dry periods increasing annual production and rainfall reducing it. Cambodia’s domestic consumption of salt is estimated at about 100,000 tonnes annually.1 Cambodia salt was not exported until 2017, largely because of quality issues. However, there was a project to improve quality and begin a salt export industry.2

A donor-backed project launched in April 2013 aims to produce Cambodia’s first export-quality sea salt in Toek Chhou district, Kampot province.8 The $2.9 million venture is targeting 20,000 tons of salt each year for export from a 100 hectare model salt farm. The plan is to build a packaging factory.9

By introducing best practices in solar salt production, the project aims to make salt suitable for export to markets in South Korea and, potentially, Japan.

The capital cost of the first project phase is estimated at US$2.9 million. A second project phase, estimated at US$7 million, would increase production capacity, add a refining plant, and potentially enable the export of refined food-grade naturally evaporated sea-salt to a broader international market.10

If all Cambodian salt production reached the highest standards following international best practice, an estimated potential export industry worth up to $100 m annually could be created.11

In recent years, Cambodia has exported its salt into the international market. In February 2017, under an agreement with French company, Le Guerandais, 20 tonnes of Cambodian salt are exported for the first time and sold at $58 per tonne.12 According to United Nations Comtrade Database, Cambodia salt and citric acid are exported to Netherlands about 900 tonnes which equivalent to $750.000 in the 2016.13