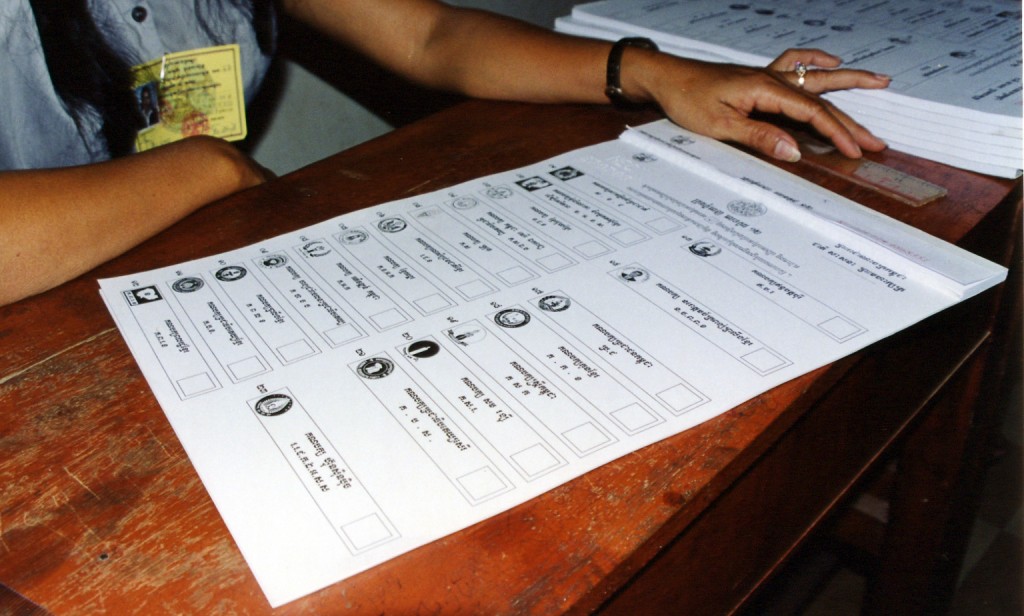 Cambodia saw consecutive civil wars for more than 20 years after the coup in 1970. In 1991, parties in the conflict reached agreement to end the fighting. However, it was only in 1993 that a national election was organized by United Nations Transitional Authority for Cambodia (UNTAC), in collaboration with the Supreme National Council of Cambodia (SNC).

The first national election was held on 23–28 May 1993. Despite instability in some parts occupied by the Khmer Rouge, voter turnout was high at 86.78% out of the total of nearly 5 million registered electors.1 Four political parties won seats in the Constituent Assembly but no party held a two-third majority of the seats required to set up the cabinet, leading to a coalition government.

After the 1998 election of the National Assembly, another chamber of parliament was established. The Senate was the result of a political consensus reached in order to solve the political deadlock where the executive could not be established due to a requirement for a two-third majority of seats in the Assembly. Since 2006, most members of the Senate have been indirectly elected by commune/sangkat councillors while four members are nominated by the king and the National Assembly.

In 2002, the first universal and direct sub-national election was held for communes and sangkats. After the promulgation of the Law on Election of the Commune/Sangkat Council, every member of a council would be directly elected based on the proportional electoral system. These elected bodies manage their own funds and resources, and take care of their own local affairs including development and security. (The next commune/sangkat elections have been set for 4 June 2017.)

It was not until 2009 that the Royal Government of Cambodia extended its administrative reforms to upper levels of the territorial administration. As a result of the decentralization and deconcentration reforms, elections were also arranged for capital city, province, municipality and district, but these are not universal and direct.

Since the National Assembly election of 1993, it has become common for some political parties dispute the results, claiming election irregularities.

Many reforms took place after the 2013 national election, mainly involving parliament, election laws and the National Election Committee. Based on the 27 July 2014 agreement between the ruling Cambodian People’s Party (CPP), and the opposition Cambodia National Rescue Party (CNRP), the number of Special Commissions at the National Assembly was increased from 9 to 10, and each party occupies 5.2 Also, since there are only two winning parties in the Assembly, a dialogue is normally carried out between the majority leader and the minority leader, to solve important national issues.3

The last reform in the post-2013 election involved the National Election Committee (NEC). As a result of the agreement between the CPP and the CNRP, the NEC was restored to be one of the supreme national bodies stipulated in Cambodia’s Constitution, chapter 15 new (two).5 The organization and functioning of the NEC is prescribed in an organic law rather than in the election law. 6

Khmer citizens of both sexes at least 18 years old have the right to vote, and those at least 25 may be candidates in elections.7 These rights may be suspended in a particular period of time or for prisoners.

Since Cambodia adheres to the proportional electoral system8, candidates are nominated by political parties that have registered for elections.9 political parties need to register at the Ministry of Interior and also either in a particular constituency or the whole country, with the National Election Committee (NEC).

The voting-age population has doubled from around 4.6 million in 1993 to 9.5 million in 2013. However, the percentage of voter turnout shows a downward trend between early and later elections.

Cambodian citizens may establish and register political parties, and this usually happens just before election years. At least 80 Cambodian citizens 18 years or over and having permanent residence in Cambodia, are required to establish a political party, which is done through a letter to the Ministry of Interior (MoI). There are additional requirements for validity, such as registration and membership of at least 4,000 people nationwide.15 The 1997 Law on Political Parties makes clear differences between establishment and validity, meaning that established parties without validity may not participate in elections. Registration at NEC is an ultimate requisite for participating in elections.16

Since the first national election, the number of political parties has sharply decreased. The total number of parties in national elections nearly doubled from 20 in 199317 to 39 in 199818 but plummeted to 8 in the last national election in 2013.19 Parties winning seats at National Assembly also declined from 4 in 199320 to 2 in 2013.21 Consequently, it is questionable whether Cambodia’s proportional electoral system fully supports a liberal multi-party principle.22

In a 2013 report, The Committee for Free and Fair Elections in Cambodia (COMFREL) suggested that reforms of the institutional framework, electoral system, election administration, voter registration system, election campaigns and dispute resolution procedures were necessary for the elections in 2017 and 2018.23 Some non-governmental organizations such as the Cambodian Center for Human Rights (CCHR) remain concerned about a lack of women’s representation in politics and have called for 30 % of women in political parties’ candidate lists.24

Elections normally function in phases from voter registration to the release of the official results, and complaints may be made in any phase of the election. This does not mean that election bodies can make election complaints in each phase.

National elections allow Khmer citizens to elect representatives for the parliament, and the Council of Ministers, the executive. Elections for the National Assembly happen every five years while those for the Senate take place every six years.25 In the case of vacant seats during each legislature due to a death, resignation or loss of membership, each party chooses new lawmakers out of their candidate lists.26

At sub-national elections people elect their local representatives. While members of commune/sangkat councils are elected for 5 years, those of the capital city, province, municipality, district /khan councils have a 6-year term.27 The elected members of the commune/sangkat will elect members of the Senate, and capital city, province, municipality, district/khan councils, meaning that those elections are not universal and direct.28 Unlike the national elections, sub-national elections may be organized for each council individually in case of the entire vacant seats of the councils and other cases as covered by law.29

The National Election Committee (NEC) is the national body in charge of election organization and functioning.30NEC updates voter registration lists annually, and defines the documents required to prove voters’ identity, making sure that Cambodian citizens of voting age may participate in elections. Also, during election years, NEC oversees functioning of the elections at polling stations, and resolves election complaints. The organization and functioning of NEC is set out in the http://www.national-assembly.org.kh/tv/kh/ViewLawFile.aspx?LawDID=462 and election laws.

Since 1998, all elections have been supervised by NEC.31 The NEC has been subject to criticism from opposition parties, election watchdog groups,32 and some international organizations, including most recently the EU Parliament33 and the UN Office of the High Commissioner for Human Rights.34 Some criticisms are that the body lacks independence, is biased in favor of the ruling party, and has systematically organized flawed elections that favored the ruling party. As a result of the July 2014 agreement between the CNRP and CPP, the NEC was restructured by having four of its members chosen by each party and a key ninth member jointly selected.35

The Constitutional Council of Cambodia is one of the supreme state organs described in the Constitution. The Council only became fully functional in 1998, along with the Senate, and has since become a member of the  Association of Constitutional Courts Sharing the Use of French Language.36 This supreme organ consists of 9 members who are nominated by the king (the head of state), National Assembly and Supreme Council of Magistracy for a 9-year term.37 The organization and functioning of the Council are defined by laws while its procedures are stipulated in internal rules.38

Election monitoring and evaluation happen within and also between election years. Political parties and some organizations are actively engaged in encouraging transparency, neutrality and fairness of the elections while others follow up the performance of winning political parties and their candidates in parliament and government during the post-election periods. Election years appear to be the busiest years for them.