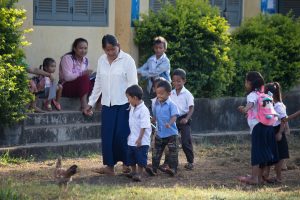 Access to free, good quality education in Cambodia is a right set out in the country’s Constitution:

Cambodia is moving towards 100 percent enrolment of children in primary education. Government spending on education has increased substantially in recent years. Hundreds of new schools are being built, and literacy rates have improved. But while some areas of education have made big advances, enormous challenges remain.

To put numbers to some of the challenges:

The Ministry of Education, Youth and Sport have said that for the 2018–19 academic year, the figures for early childhood education were:

Save the Children have said that in 2017, only 0.3 per cent of the Ministry of Education, Youth and Sport’s budget was allocated to early childhood education.7

The government is working towards a basic nine-year education for all Cambodian children, as provided for in the Constitution. Technically, a child can complete 12 years of schooling: six years at the primary level (grade 1 to 6), three years for lower secondary (grade 7 to 9) and another three years for upper secondary education (grade 10 to 12).

In a May 2019 report, Save the Children said that the percentage of children of primary and secondary school age who are not attending school is still high at 22.5 percent.9

Although public schools are nominally free for children to attend, research from 2012 found that, as in many countries with “free” education, many students and parents say they incur costs.13 This was estimated at $119 per student per year – a considerable amount for low income families and those with several school-age children. Cost may contribute to dropout rates.

“Recruiting enough teachers is still a very big challenge in Cambodia. In order to fix this, we must increase the education budget to award proper salaries and maintain highly capable teachers,” Education Minister Hang Chuon Naron has said.19

Around 18,000 teachers are university graduates. For 51,820, upper secondary is their highest level of study; for 19,267, lower secondary; and there are 1,779 teachers who have only attended primary school classes.20

The salaries of teachers of public schools have risen significantly in recent years, but from a low base. At the beginning of 2014, the average minimum wage for teachers was $80 a month.22 but by April 2017 it had jumped to $230 (not including bonuses).23

There are also many foreign expatriates teaching English in Cambodia, mostly in private schools, and few entry barriers to this. The average salary for this role in Phnom Penh is $10–14 per hour.24

The weakness of Cambodia’s higher education and training sector is very evident in the measures of The Global Competitiveness Index 2017–2018. For this element, Cambodia ranked 124th out of 137 countries.28​   The quality of primary education ranked 112th out of 137. The inadequately-educated workforce is the second biggest problem (after corruption) when it comes to doing business in Cambodia.29

The Ministry of Education, Youth and Sport (MOEYS) released a policy document on Higher Education Vision 2030 in April 2014.30 Higher education is crucial to national development. The policy document sets strategies and action plans for implementing the vision, which is about access to and quality of education, and programs that match development and labour market needs.

A key concern about higher education voiced in the document is the large number of Khmer studying business subjects, and the relatively small number who opt to study science, engineering or agriculture. These latter subjects are, the document says, “areas of study considered to be key skills to foster the growth of the Cambodian economy.”31

MOEYS has responded to the outcomes expected in the NSDP 2014–2018 by preparing the Education Strategic Plan (ESP) 2014–2018.32​ This has an increasing focus on the expansion of early childhood education, expanding access to quality secondary and post-secondary education and non-formal education, technical and vocational education. Specific measures will be taken to assure the education for marginalized children and youth.

In January 2016 the government launched its first nationwide policy for child development, to be overseen by the Cambodia National Council for Children.33 The policy aims to reduce the student dropout rates and increase vocational training opportunities, among other things.

Related to education and training