In terms of attractiveness, one of Cambodia’s assets is the relative absence of intense development along its coasts, in comparison with neighboring countries. The 440 kilometer-long coastline includes a large area of non-urbanized zones, where locals can make their livelihoods from coastal resources. Cambodia’s coastline is on the Gulf of Thailand and contains 4 provinces:

An Exclusive Economic Zone (EEZ) of 200 nautical miles from the coastline, covering approximately 55,600 km2 of the Gulf of Thailand, was established following the United Nations Convention on the Law of the Sea1 and supports Cambodia’s sovereignty over its coastal resources.

Marine and coastal areas consist of a combination of land, shoreline and offshore areas, including mangroves and excluding inland rivers and lakes2. 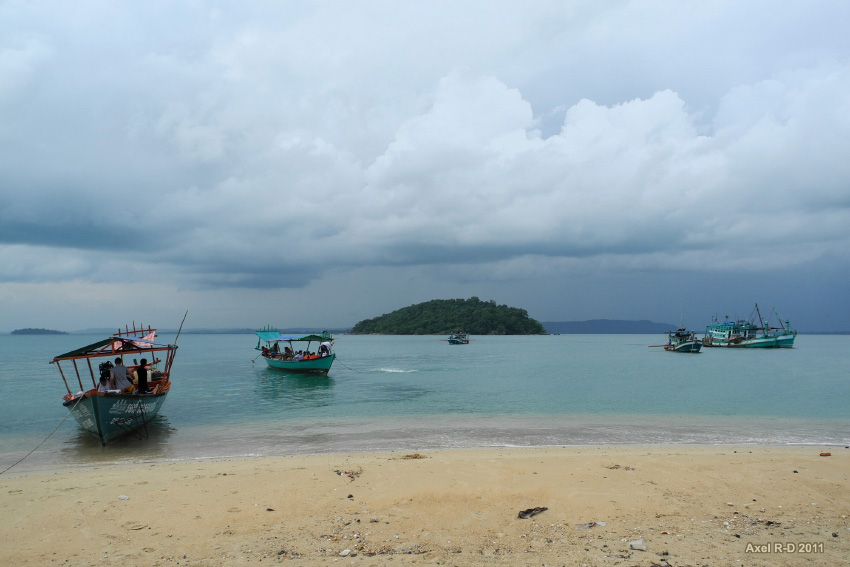 Ecological issues are of particular concern for civil society and are one of the main focuses of the Royal Government of Cambodia (RGC). Recent research estimates there are 10 species of sea grasses, 70 species of hard corals, 30 species of mangroves and 435 fish species present3. In addition are several remarkable animal and plant species, such as dugong and seahorses. A 2001 marine mammal survey of Cambodian waters found ten species (dolphins and whales)4. Conservation and protection of such ecosystems remains an issue. For example, poor health has been observed on coral reefs, with extensive coral bleaching being found5. Several threats have been highlighted by the Cambodia Reef Conservation Project, including marine pollution, overfishing, sedimentation and coastal development.

Another major type of ecosystem in Cambodia is mangroves, which play an essential role in the survival of some marine species. Mangrove forests also protects the coastline, acting as a buffer zone against climatic threats and erosion. They face the same danger as coastal areas in general, with the addition of clearance and various kinds of salt farming/aquaculture6. 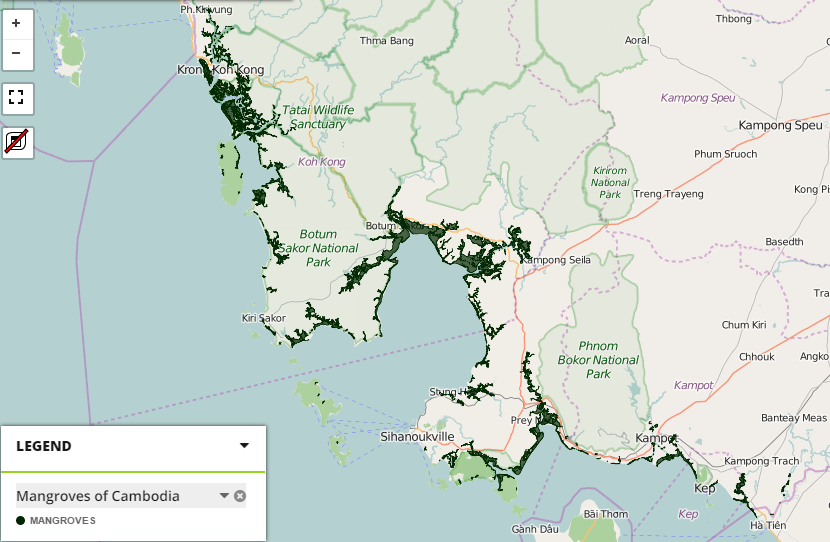 There is a total of 83,700ha of mangroves in Cambodia. They are still being harmed due to exploitation, land exploitation and poor land management.

The protection of marine and coastal areas is organized by governmental agencies, civil society, private stakeholders and local communities.

Organization and management of coastal areas

In 2007, a specific Marine Protected Area (MPA) was established in Song Saa Private Island Resort, on two small islands in the Koh Rong archipelago, Koh Ouen and Koh Bong7. It was a private initiative8.

Consultation with local stakeholders and NGOs had been made to draft a multiple-use MPA also around Koh Rong9. In parallel and for 5 years10, several studies were conducted, mostly from Coral Cay Conservation and Fauna & Flora11. Based upon this preliminary work, on June 16 2016, the first official MPA was approved by the Ministry of Agriculture, Forests and Fisheries (MAFF)12. It covers 405km2 around the islands of Koh Rong and Koh Rong Sanloem13 and is known as the first Marine Fisheries Management Areas (MFMA) in Cambodia. The MFMA will ensure support to community fisheries patrols to fight illegal fishing. It will also provide assistance and funds to protect biodiversity and resources within the zone. Koh Rong archipelago also contains 3 Community Fisheries, also established by MAFF between 2008 and 2010: Koh Rong Sanloem, Prek Svay and Deom Thkov14.

In other regions, a master plan is in the process of being drafted to protect the environment and improve tourism around popular beaches in Sihanoukville province. It includes a 50 meter waterfront strip dedicated to tourism infrastructure, such as a cycling path or food stalls. The questions of implementation and financing however are yet to be answered15. The National Committee for Coastal Management and Development is set to build 17 sea gates in Sihanoukville province to protect surrounding beaches. The target is once again to facilitate tourism through enhancing coastal esthetic16.

A National Action Plan for Coral Reef and Seagrass Management in Cambodia (2006-2015)17 was established by the Fisheries Administration, aiming to design a master plan for Kep and Sihanoukville. The development of infrastructure, port, industry and urbanization are constant issues for marine and coastal areas.

The revised 2006 Fisheries Law aims to protect the aquatic environment by, among other measures, outlawing:

A very limited number of fishery protection officers and limited resources for them means that activity in breach of the law is common18.

Joint efforts and programs in place

A Coastal Management program was issued by the MoE, at the initiative of the United Nations Environment Program (UNEP)19. It released two major programs20.

Several NGOs are working with the RGC to preserve the coastal environment in Cambodia. Among them, Marine Conservation Cambodia conducts research on environmental aspects, and contributes in working against illegal fisheries in cooperation with the RGC.

Data collection is limited and coastal resources are only roughly estimated, especially regarding fish stocks. Illegal fisheries remain a major issue. Even the legal fishers experience issues in following the rules, due to a lack of implementation and comprehension of the laws.

Management of coastal areas is mostly focused on the resource aspect of fisheries and aquaculture, rather than the environmental protection aspect. This may explain why the new MFMA is under the supervision of MAFF rather than MoE.