The judiciary is one of the three powers, together with the executive (the Government) and legislative (the National Assembly and the Senate), that constitute the state. 1 Its role is to monitor the application of the law and punish its violation. This power is vested in judges and magistrates (and sometimes, to a lesser extent, the juries), who rely on legislative texts (which are drafted by the legislative branch) to make decisions.2

The term “judicial power” can have two different meanings: it can be used when referring to the courts and tribunals themselves or to the power they hold to decide disputes. 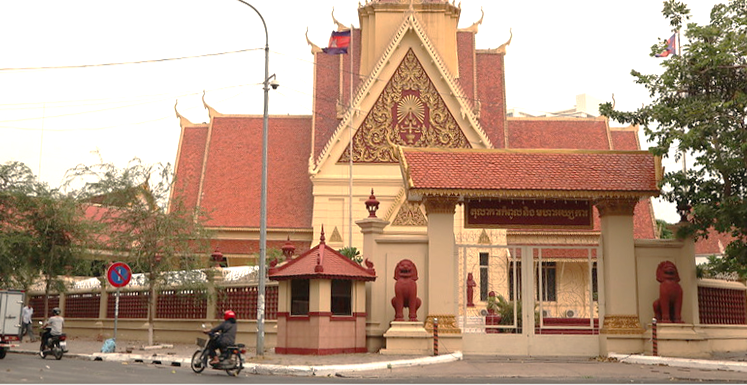 Supreme Court of the Kingdom of Cambodia. Photo by Punwath Prum, taken on 24 March 2019. Licensed under CC BY-SA 2.0.

The 1993 Cambodian Constitution established the separation of powers3 and the independence of the judiciary from other institutions. The independence and impartiality of the judiciary is an essential condition for the existence of the rule of law in any country, and is included as part of the Cambodian Constitution.4 The rule of law is the basis for the principle of equality of all before the law, including the state, to be held accountable before the judiciary for any violation of the law.5 Only a judge has the constitutional power to adjudicate, in accordance with the provisions of the law, “conscientiously and wholeheartedly”.6 Under Article 128 of the Constitution, the judiciary is independent, guaranteeing and upholding impartiality and protecting the rights and freedoms of the citizens. Under Article 132, the King is the guarantor of the independence of the judiciary. The Supreme Council of Magistracy (SCM) assists the King in fulfilling this duty.7 The SCM functions independently from the executive power and oversees disciplinary matters involving judges and prosecutors. It also makes requests to the King to appoint judges.8

The fundamental right to a fair and equitable trial is described in laws and codes such as the Code of Civil Procedure9 and the Criminal Procedure Code,10 which govern the rules of evidence, the conduct and impartiality of the trial.

However, the rule of law only exists when the judiciary is genuinely independent and and there is “effective enforcement of the law.”11 Many international and local organizations have said there is no judicial independence in Cambodia and therefore no rule of law.12 Contrary to the principle of equality before the law, commentators have said that some litigants, because of their links with political or economic powers, are favored.13 Cambodia was ranked 125 out of 126 in the Rule of Law Index, published by the non-profit organization World Justice Project in 2019, and appeared last on civil justice and corruption for the Asian region.14 As a result, citizens’ and businesses’ confidence in the judicial system is low. Many prefer to turn to alternative dispute resolution methods, which are considered more efficient and fairer.15

The judicial system is organized according to a three-tiered system16:

Beyond this three-tier system, the Constitutional Council is responsible for verifying the conformity of laws with the Constitution and can hear constitutionality issues that may arise during a trial.23 The Extraordinary Chambers in the Courts of Cambodia (ECCC) are responsible for investigating and prosecuting the key Khmer Rouge leaders with the international community’s help and following international justice standards.24

Related to Judiciary and courts