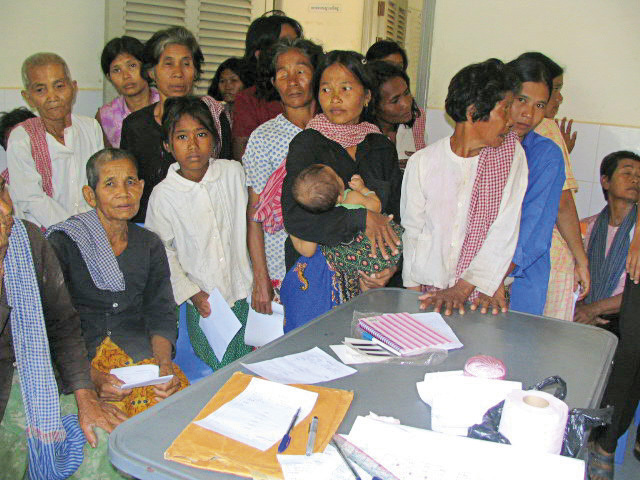 Patients are registered during the outreach screening at Vien Health Center. Photo by Community Eye Health, taken in 2006. Licensed under CC BY-NC 2.0

The provincial and local governments are overseen by the national government through institutional and legal frameworks. In each level of territorial administration, provincial and municipal departments and branches of each governmental ministry cohabit with governors, and both of them represent the governmental ministries and the central government, the executive. In addition, while courts of the first instance are located in the capital city and provinces, their decisions are normally subjected to appeals before higher courts (See Legal and Judicial System). Moreover, deika or local councils submit to sub-decrees issued by the prime minister, head of the executive, and laws approved by the Parliament (See Legal Framework).

Authorities at any level of the territorial administration may perform their duties within jurisdiction and finance. In general, sectors of the provincial and local governments may not surpass those of the national government. For example, councils at the capital city, provinces, municipality, districts and Khans can not decide on complaints of divorces, serious domestic violence, any felony and misdemeanour, and disputes at the courts.1 Incomes of the sub-national administration may come from their own revenues of provided services, taxation and allocation of the national budget approved by the parliament.2

Since the late 1990s, the national government has gradually delegated its centralized powers to the local governments. With a promulgation of Law on Administration of Commune/Sagnkat in 2002, the lowest level of the local administration, commune/sangkat, became a legal entity independent from the national government. This means that communes and sangkats have their own resources, budget and property, and administration. Most importantly,  theCommune/Sangkat Council is a governing body composed of members who are directly elected by local people (See Administration).

In the near future, sub-national governments will have more autonomy and power in administering their local affairs and staff. In June 2013, with an amendment to Law on Organization and Functioning of the Council of Ministers, the national government showed a clear message that civil servants of the ministries and other national bodies, who are performing their duties at sub-national levels, will be managed, nominated, replaced and dismissed from their duties by the sub-national administration.3 If that is the case, they will be no longer cohabitating with the local administration but under a supervision of the latter.

Related to provincial and local governments