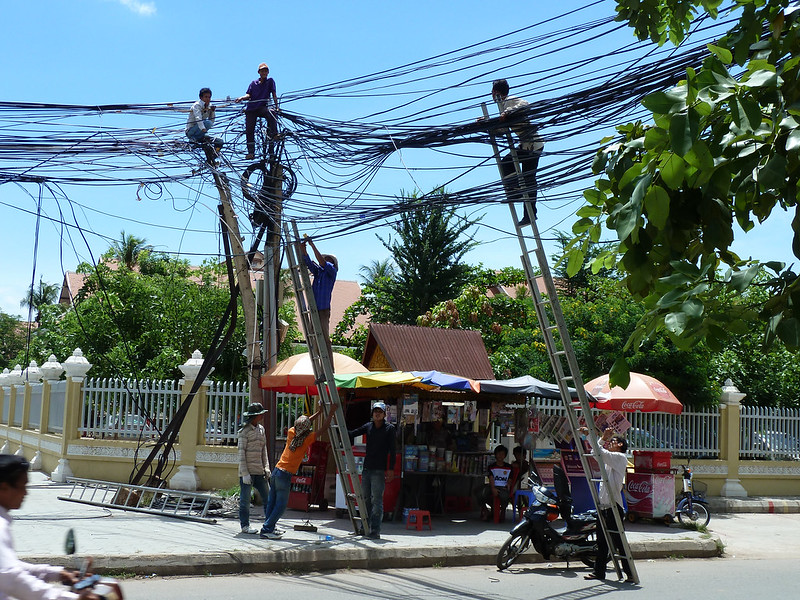 Energy is about more than just electricity. It includes all means used to provide energy for industrial and domestic purposes, from firewood for cooking to national electricity production.

This section focuses on the production, distribution and use of electrical power. Activities involving the exploration, extraction and refining of oil and gas are described in the extractive industries section.

Cambodia has undergone rapid economic development in recent decades. However, the country still lacks the infrastructure required for the energy sector to match the pace of development. Energy security facilitates a country’s socio-economic growth and sustainability. Energy supply and access is fundamental to achieving developmental goals.1 As the population increases and industry expands, Cambodia’s electricity consumption is forecast to grow annually at 9.4% until 2020.2

In 2014, the government made ‘electricity access for [all] Cambodian villages by 2020’ a top priority in the fifth mandate.3 To achieve this goal, laws and policy on development of the energy sector were adopted, while cooperation and participation from stakeholders including ministries and other governmental agencies, development partners and private investors have also played an important role.

A World Bank report published in early 2018 stated that 97.6% of Cambodian households have access to at least one source of electricity – 71.5% from the grid and 26.1% off the grid, from sources such as solar home systems and rechargeable batteries.4

By December 2018 the Electricity Authority of Cambodia (EAC) said it was supplying electricity to 12,305 villages (87 percent of all the villages in Cambodia) with distribution networks due to be constructed soon for a further 1,767 villages (12.5 percent).5

Cambodia is totally reliant on imports for oil and gas, despite commercial quantities of oil being found offshore. Many licenses have been granted for exploration of oil and gas blocks. In 2016 Cambodia used around 48,000 barrels of petroleum a day.6 Due to a high dependence on imported fuel and a fragmented power supply system, Cambodia’s electricity prices are one of the highest in the ASEAN region, and the world.7

The charts above show the difference between estimates based on World Bank data from 2012 of how Cambodia’s electricity would be generated in 2014, and data reported by the EAC on electricity production in 2014.

The ADB has projected that Cambodia’s peak electricity demand will more than double to 2,401 megawatts between 2015 and 2025. In meeting this increased demand, Cambodia can access more affordable power through imports from neighboring countries, as opposed to undertaking their own power production.11

More generally, MME projects that the country’s primary energy demand from all fuels will increase 5.4% annually from 2010 to 2035. As of March 2019 there were two coal-fired power plants in Sihanoukville Province, one from Cambodia International Investment Development Group (CIIDG), the other from Malaysian firm Leader Universal Holdings, with a third plant due to launch before the end of 2019.12 The increased use of coal is projected to see CO2 emissions increase by 6% per year until 2035.13 By the end of 2018 there were nine hydropower plants operating, with seven feeding into the national grid. The 400 MW Lower Sesan II dam was officially opened in December 2018 in a ceremony overseen by the prime minister.14

Phnom Penh consumes 90% of Cambodia’s electricity,15 although the total number of people in Cambodia access to electricity doubled between 2002 and 2011.16

Electrical distribution, dam construction and other matters in the energy sector have regional and trans-border implications and there are official bodies and agreements addressing these, such as the Mekong River Commission.