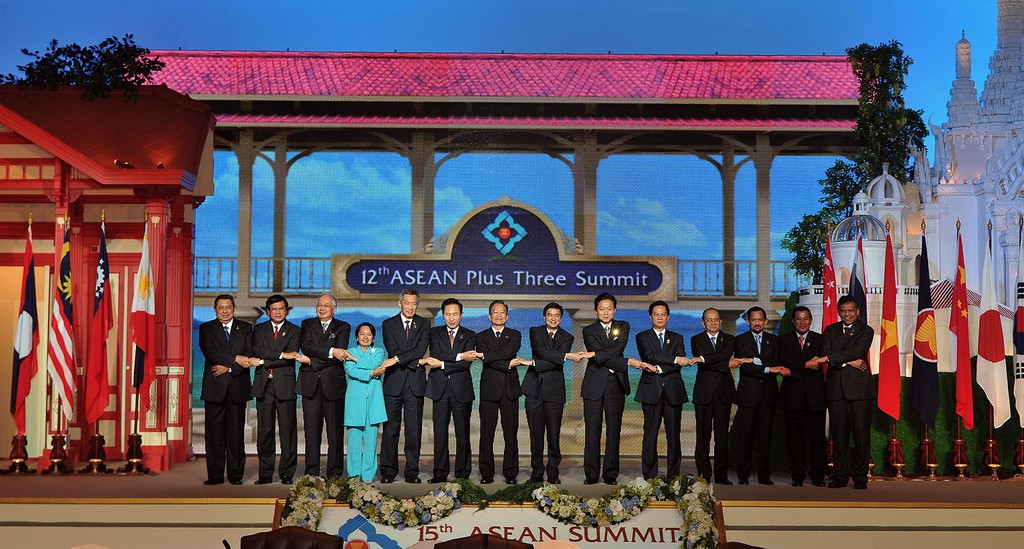 Cambodia has diplomatic ties with many countries, including the People’s Republic of China, the United States, Japan, France, the United Kingdom, South Korea and North Korea. The country is a member of international organizations such as the United Nations and its agencies. It also has membership in the Association of Southeast Asian Nations (ASEAN), the World Bank (WB), the International Monetary Fund (IMF), Asian Development Bank (ADB), International Labor Organization (ILO) and World Trade Organization (WTO). Cambodia is also a founding member of the Asian Infrastructure Investment Bank (AIIB).

In a 2018 speech, Prime Minister Hun Sen reiterated that Cambodia is a non-aligned state.1

Loans from individual countries and international bodies representing many countries have been a significant source of funding for Cambodia’s development. A Cambodia Public Debt Statistical Bulletin released in March 2019 by the Ministry of Economy and Finance stated that, from 1993 to the end of 2018, the government had signed concessional loan agreements with development partners for $11.39 billion.2 Almost 87 percent was for infrastructure development. In 2018 alone the government signed concessional agreements to a value of US$1.84 billion.3 Around 56 percent was with bilateral partners and 44 percent with multilateral partners. The Ministry reported that “Overall, the loans are highly concessional with an average grant element of 43.5 percent.”4

In physical terms, at the start of 2019 Cambodia had 82 gates connecting to neighbors: 3 international airports, 13 ports and 66 land border gates.5

In 2020 Cambodia will host the Asia-Europe Meeting (ASEM) Summit, with 40 leaders expected. Cambodia will take over the ASEAN chairmanship in 2022 and host the SEA Games in 2023.6

The big neighbors: Thailand and Vietnam

A big part of Cambodia’s history has naturally been shaped by its relations with Thailand and Vietnam. Although Thailand is Cambodia’s largest supplier of imported goods, the countries have in the past argued over sections of undefined maritime and inland boundaries. The dispute culminated in conflicts between armed forces between 2008 and 2011, notably around the famous Preah Vihear temple on Cambodia’s northern border.

The relationship has improved significantly in recent years, however. The volume of trade between Cambodia and Thailand was US$6.1 billion in 2017, up almost 10% from 2016.7 Trade is very heavily one-sided. Exports from Thailand to Cambodia were valued at $5.2 billion in 2017, a rise of almost 13 percent from the previous year. Thailand imported $0.89 billion of goods from Cambodia, a fall of 4.5% from the previous year. A Thai government source indicated that the Cambodia-Thailand trade volume was more than US$8 billion in 2018.8

Illegal border crossings from Cambodia to Thailand occur on a large scale, as do deportations back to Cambodia. Lay Kimluon, the Banteay Meanchey provincial anti-human trafficking police chief, was quoted in December 2015 saying that 55,626 Cambodians were sent back through the Poipet checkpoint by Thai authorities since the start of the year.9

Vietnam is a major source of imported goods as well as a significant export market for Cambodia. Trade between the two countries grew by 30% in 2017 compared to the previous year to nearly US$3.8 billion.10 Vietnam exported almost $2.8 billion of good to Cambodia (up 26%), with important export goods including steel and iron products ($521 million), oil and petrol ($375 million). Cambodian exports to Vietnam reached $1 billion (up 40%) and included timber and wood products ($214 million), cashews ($168 million) and rubber ($138 million).11

There are periodic border tensions – in 2015 Cambodia’s foreign ministry sent a dozen protest notes to urge Vietnamese authorities to halt all activities along the border that undermine the status quo. In late 2015 the Ministry of Interior sent an order to all local authorities forbidding Cambodians who have land near the border with Vietnam from leasing land to Vietnamese farmers.12

Between July 2014 and June 2015, Cambodian authorities deported 2,058 illegal Vietnamese immigrants.13 This figure has grown recently, with 2,570 Vietnamese deportees in calendar year 2016.14 Since the general department of immigration was set up in April 2014, around 84 percent of the people deported and permanently barred from Cambodia have been Vietnamese.15

In 2018 the two countries celebrated the 60th anniversary of diplomatic ties. China is the global power that Cambodia has the strongest links to and Cambodia is regarded as China’s strongest ally in the region.16

Trade between Cambodia and China was US$5.8 billion in 2017, up 22 percent from 2016.  Cambodian Minister of Commerce Pan Sorasak was reported saying that Cambodia-China trade volume has grown by an average of 26 percent a year, in the last decade.17 In 2019, the two countries agreed to aim to lift the value of their bilateral trade to $10 billion by 2023.18

Chinese investment in Cambodian infrastructure has been substantial. For example, Chinese firms have reportedly invested more than $1.6 billion to build six dams in the kingdom.19 In July 2018, a concessional loan of US$259 million was agreed between the Export-Import Bank of China and Cambodia’s Ministry of Finance for the construction of  a four-lane, 47km ring road around Phnom Penh.20 In January 2019, China pledged to provide 4 billion yuan ($588 million) in aid to Cambodia in the period 2019 to 2021.21

The countries are strong political supporters of each other. Since its severance of formal relations with Taiwan in 1997, Cambodia has been a staunch supporter of the ‘One-China’ policy.22

In the early 2000s, China wrote off about $1 billion in Cambodian debt dating back to the 1970s (China had provided loans mostly for war materiel).23

When the United States and the European Union called for Cambodia to independently investigate alleged irregularities after the 2103 election, China promptly endorsed the result and congratulated the Prime Minister Hun Sen and his party on their victory.24

Chinese President Xi Jinping visited Cambodia in October 2016. According to media reports, 31 agreements and MoUs between the two countries were reached during the visit, including loan agreements worth almost $2 billion for road infrastructure development and$180 million in financial aid.25

The United States is of huge economic importance to Cambodia. It buys a substantial proportion of the country’s exports, and bilateral trade between the two is heavily skewed in Cambodia’s favor.

One of the major differences between America’s management of aid to Cambodia and China’s is that, in the words of one observer, “U.S. aid comes with strict conditions while Chinese aid has ‘no strings attached’.”30 From 1998 to 2007, Congress prohibited direct or government-to-government assistance to Cambodia in order to pressure the Cambodian government into fully restoring democracy.31

President Obama became the first incumbent American President to visit Cambodia during the November 2012 East Asia Summit. However, in President Obama’s meeting with Prime Minister Hun Sen it was clear that slow progress on democracy and human rights matters is a block to the countries developing a deeper relationship.32

Japan provided Cambodia with more than $2 billion in development assistance from 1992 to 2015, being Cambodia’s biggest donor for most of that period.33 (China overtook Japan as the biggest donor to Cambodia in 2010, and Chinese aid is now reportedly three times that of Japan.)34 Japan prioritizes its assistance in infrastructure including road network development, a stable electricity system and the development of ICT technology.35

JICA owns 13.5% of the port company, making it the second-largest shareholder after the Cambodian Ministry of Economy and Finance, which own 75%.37

In April 2018, Japan and Cambodia signed an agreement for a $4.6 million grant and $86 million loan for economic and electricity transmission projects in Phnom Penh.38

Cambodia has consistently backed Japan in its bid for a permanent seat at the UN Security Council.39

In 2015, relations between Cambodia and Russia developed significantly with a visit to Cambodia by the Russian Prime Minister. Among a number of agreements and decisions made, Russia agreed to write-off 70% of an estimated $1.5 billion debt from the 1970s that the-then People’s Republic of Kampuchea owed.40

From 2001 to early 2017, South Korea has provided Cambodia with assistance totaling more than US$880 million.41