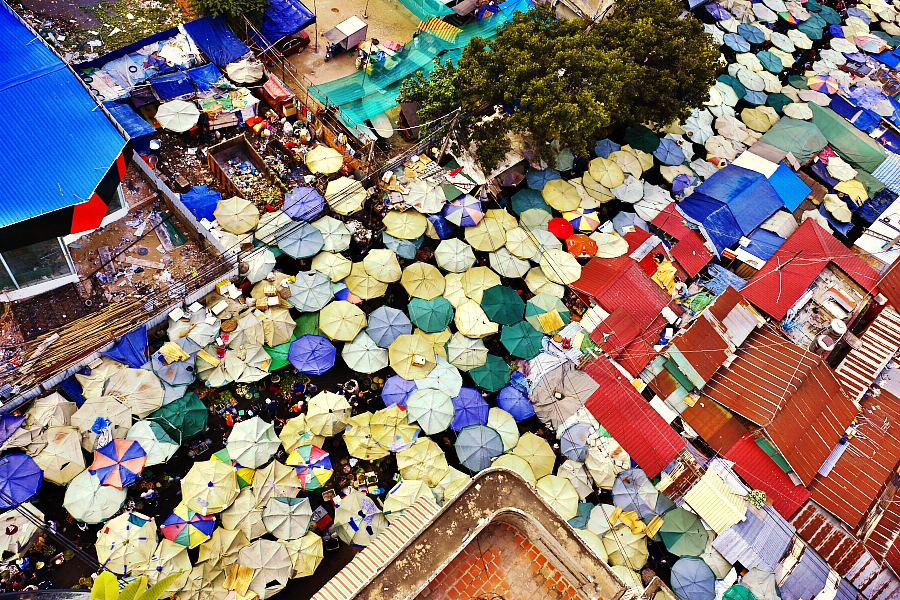 The development and administration of Cambodia’s urban areas has struggled to keep pace with urban population growth. For example, Phnom Penh’s population doubled between 1998 and 2017, to over 2 million people in the metropolitan area.1 Provisional data from the General Population Census 2019 shows that 2.13 million people live in Phnom Penh.2 Urban services that have been stretched and challenged by this growth include waste management, traffic and vehicle management, law enforcement, water and sewerage systems and urban planning.

Cambodia’s other main urban areas are Siem Reap (264,034 people)4, Battambang (228,681 people)5,  Preah Sihanouk, Prey Veng and Kampong Cham. In 2013 Phnom Penh (not including Kandal province) had by far the highest population density of any area in the country, at 2,468 per square kilometer. The next highest population densities were in Kandal (343) and Takeo (259).6

Generally, the rapid growth of urban populations across the country has created several challenges, including a lack of infrastructure and urban services, traffic congestion and lack of parking, increased urban flooding, shrinking public spaces, negative environmental impacts, and a lack of inclusive urbanization and planning.7

This growth represents a challenge for many areas of administration and development, from providing clean water to public transport. For example, while piped water reached 85% of Phnom Penh residents in 2012, urban water supply coverage outside of the capital was still limited to about 50%.8 To 2014, the Asian Development Bank (ADB) had granted US$169.21 million for 21 “Water and Other Urban Infrastructure and Services” projects in Cambodia.9

In December 2015 the Council of Ministers approved a new master plan for managing urban development in the capital over the next two decades.10 The Phnom Penh Municipal Master Plan on Land Use 2035 would establish zones for industry and commerce, zones for residential housing and preservation.

The Japan International Cooperation Agency (JICA), the Japanese government’s international aid and development agency, is helping develop plans for a potential $1 billion program to develop a wastewater management system in Phnom Penh.12 There is as yet no sewage treatment plant in the capital city. Effluent goes underground or flows to Boeung Tompun and Boeung Choeung Ek lakes. Plants and small organisms provide some cleaning of the water. JICA released a draft waste management master plan in December 2016. The key recommendation was construction a sewage treatment plant with a capacity of 282,000 cubic meters a day for the most built-up areas of the city. Built in 4 stages, it would cost $450 million. Cambodia is looking to the Japanese government to help.

Construction permit laws, which were established in 1997, mostly remain in place today, and the ADB says a lack of commitment to approve new land use plans as well as conflicts of interest demonstrate that Cambodia is not well equipped to cope with the rapid urbanization of the country’s population.13 This affects other areas of urban administration, such as the lack of fire code standards that has affected the ability of Cambodia’s fire services (using second-hand and outdated equipment) to connect to systems in new high-rise buildings.14 The majority of fires attended to in Phnom Penh are said to be the result of faulty wiring.15

The capital city’s rapid growth and poor planning are also seeing traffic and parking problems emerge. While both regulations and industry best practice do dictate a certain percentage of parking per square meter, compliance is left up to developers. City officials estimated there were 400,000 motor vehicles and more than one million motorcycles operating in Phnom Penh in 2015, and another estimate states 40,000 are added to the country’s roads each year.16

The Sub-decree on Solid Waste Management 1999, places waste management under the authority of the Ministry of Environment, and collection and disposal as the responsibility of individual province or city authorities.17 The country’s largest urban area, Phnom Penh, is facing a number of waste issues: population growth is increasing strain on waste existing collection and disposal methods, which mostly consists of landfill and burning; a growing middle class has meant the mix of solid waste now includes more plastics and less organics; a single company was granted the city’s exclusive waste disposal contract for 47 years in 2004.

While authorities announced a review of this contract early in 2015 following strikes and complaints about rubbish piling up, no announcement has been made on the review.18 Phnom Penh produced 1,20019 and 1,60020 tons of rubbish per day according to government and contractor sources, and it is projected to reach more than 3,000 tons per day by 2030. Studies predict that the city’s current landfills will reach capacity by 2020.21 22

Although official rates of urban poverty are lower than rural ones, income inequality is high.  Some neighborhoods are gentrifying, as wealthier residents move in, sometimes displacing long-time lower-income inhabitants.