There is no large industrial-scale extraction of minerals carried out in Cambodia yet, but many exploration licenses have been granted1 and some mining companies have reported promising finds of minerals such as gold.2

Today companies from China, Korea, Vietnam, Australia and elsewhere are exploring for minerals. Some work in partnership with local companies, but as Cambodian law allows for wholly foreign-owned mining companies to receive licenses, some work alone. 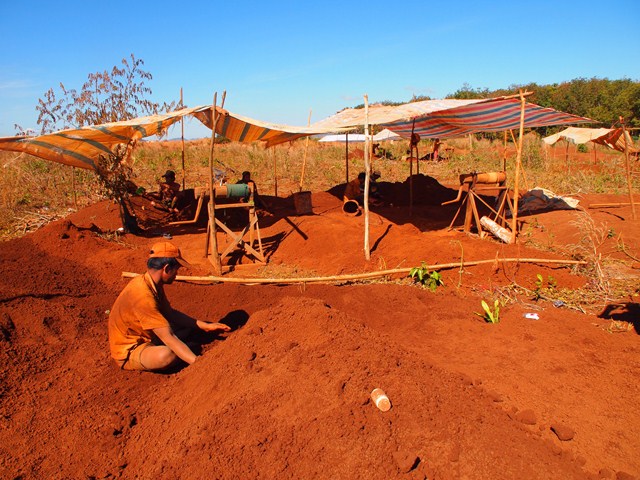 Primitive mining at East of Ban Lung, Cambodia. Photo by Paul Arps, taken on December 30, 2011. Licensed under CC BY 2.0

The process of setting up a working mine can be lengthy and expensive, and a large mine will usually take years to become fully operational.

The March 2013 document Current Situation of Mining Industry in Cambodia, published by the General Department of Mineral Resources, part of the (then) Ministry of Industry, Mines and Energy, stated that 139 exploration licenses had been issued, involving 91 companies. The vast majority of exploration was for metallic minerals (notably gold, copper and iron) and coal.

In early 2014, Angkor Gold Corp announced that Mesco Gold had applied for a mining license for the Phum Syarung Gold Project.3

The rules around mining developed significantly in May 2016 with Sub-Decree No. 72, The Management of Mineral Resource Exploration License and Industrial Mining License. Many commentators suggest this was modelled on Western Australia’s regulations. The sub-decree was followed in October 2016 by Circular No. 360, Guideline for Granting Mineral Exploration License.

Conduct and requirements of license holders

Before a mining license is granted an environmental impact assessment is conducted which includes a management plan for minimizing environmental and social impacts. The holder must provide financial guarantees and prepare a plan for restoration after the project is over. The licensee must protect the health of workers and the public, and must also educate, train and provide jobs to Cambodian citizens.6

License holders pay fees for registration, renewal or transfer of licenses and annual land rental. Royalties are paid to the state for any minerals extracted, with rates depending on the type of mineral extracted. License holders are also obliged to pay the appropriate taxes.

Where can mining happen?

Mining can take place on private land with written permission from the landowner.

The mining law states that all mining in “national cultural, historical and heritage sites” is prohibited, and mining activities in “protected, reserved or restricted” areas can only be carried out with written permission of the authority responsible.7The 2002 Law on Forestry allows mining within the permanent forest estate, however, any proposed mining operation must be the subject of a ‘prior study-evaluation’ by the Ministry of Agriculture, Forestry and Fisheries (MAFF).8

The legality of mining operations on lands traditionally managed by indigenous people requires clarification. Much of the current exploration is being conducted in areas with large indigenous populations. The 2001 Land Law states that indigenous communities have the right to register their collective ownership over “those lands where the said communities have established their residences and where they carry out traditional agriculture.”9 Until communities have the opportunity to register their land, interim protection is provided by the 2001 Land Law, which states that indigenous groups existing at the time the law was passed “shall continue to manage their community and immovable property according to their traditional customs” until they are able to register their land.10 Therefore, any mining on the land of indigenous peoples is potentially in breach of the Land Law.

Much of Cambodia’s resource wealth lies in the northeast of the country, in Mondul Kiri, Ratanak Kiri and Kratie. These areas are home to diverse ecosystems and sensitive biodiversity. According to a 2009 NGO report, “Mondul Kiri province contains areas of four protected wildlife sanctuaries and two protected forests which in their entirety total 1,267,322 hectares. As of 2008 no less than 282,700 hectares or 22 percent of these protected areas were covered by mining concessions.”12

In 2011 a planned titanium mine in Koh Kong province was cancelled due to “concerns of the impact on the environment, biodiversity and local livelihoods”, which many saw as an encouraging sign that decision makers are aware of the need to balance the impacts of development with its benefits.13

An environmental impact assessment was released in December 2016 for a bauxite mining project in Mondolkiri, proposed by a Chinese-owned company. The proposed mine would be on the border of the Keo Seima protected area, with indigenous Phnong communities most affected.14