In September 2015, the UN General Assembly adopted the new 2030 Agenda for Sustainable Development. This contained 17 items that have become known as the UN Sustainable Development Goals (SDGs), intended to drive action in critically important areas to the year 2030. These goals have been broken down into 169 targets and 230 indicators.1

The agenda was designed to replace the Millennium Development Agenda, which had eight goals to be achieved by 2015. The new goals were developed partly in response to criticism of the Millennium Development Goals (MDGs). These previous goals were perceived as lacking ownership by all stakeholders, being more relevant to global rather than local development contexts, and giving preference to what donors wanted rather than local development processes.2

The transition from MDGs to SDGs in Cambodia

In 2003, the MDGs were refocused for a local setting when the Cambodian Millennium Development Goals (CMDGs) were adopted. This was intended to fit local realities more effectively and included adding a ninth goal to manage the explosive remnants of war.3 However, many observers believed that the focus of these goals still took too much of a global perspective, which hampered the local implementation of the Millennium Development Agenda.

Understanding how the SDGs tie in to each other and the need to align knowledge and perspectives at the country level is key to addressing this.4 For example: 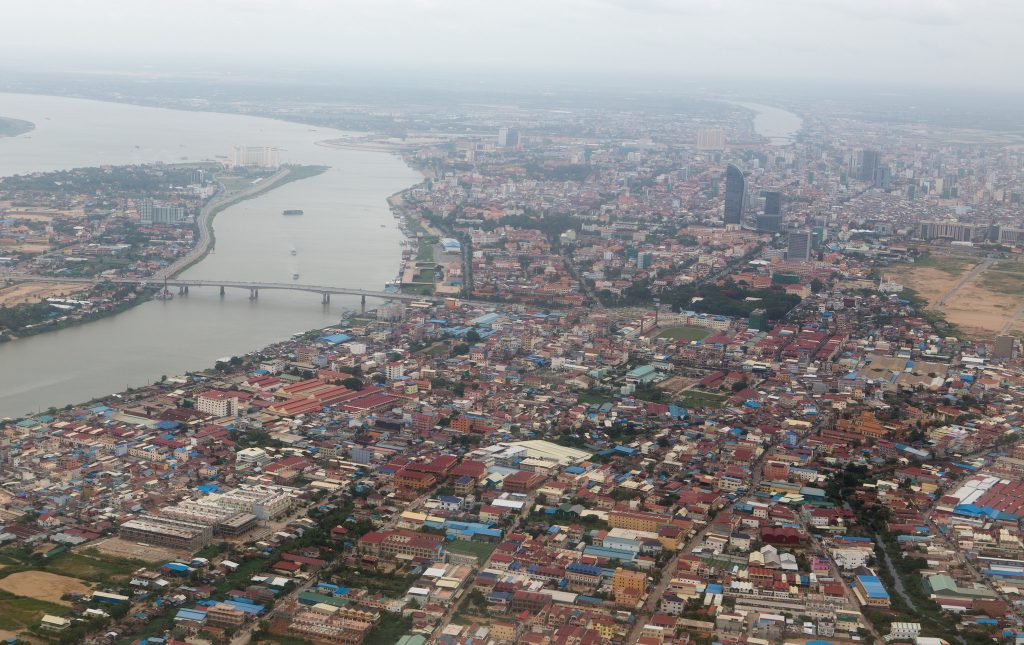 Phnom Penh, where the Tonle Sap river meets the Mekong river (left), has about 2 million people. It was Cambodia’s capital from 1432. Photo by Ashley, taken on 22 June 2015. Licensed under CC BY-NC-ND 2.0.

Localization of the SDGs

This localization of the SDGs started before the completion of the Millennium Agenda with consultative workshops held by the Ministry of Planning. The participants in these meetings included representatives from each government ministry and development partners and UN agencies, who reviewed the targets and indicators of each SDG to adapt them to Cambodia8 to inform the work of Technical Working Groups (TWGs). These groups have to develop more specific plans across different functions of the national and sub-national government.

Considering the breadth of issues covered by the SDG targets, it is important to consider how well the 2030 Sustainable Development Agenda will respond to criticisms of the Millennium Agenda. The RGC will not outline new strategies for achieving the Sustainable Development Goals until the National Strategic Development Plan (NSPD) 2019–2022 is established. Therefore, assessing the alignment of SDGs with current national development planning and policies, such as the NSDP (2014-2018) has been used to identify gaps where these plans and policies do not align with SDG targets.9

Of the 169 SDG targets in Cambodia:

Of the remaining 109 SDG targets:

These gaps in existing policies occur for several reasons:

Key issues lacking adequate attention include gender inequality, the equitable distribution of the benefits of natural resources to vulnerable groups, the challenges of an urbanizing population, and the inclusion of vulnerable groups in decision-making processes.

These planning and policy gaps include many cross-cutting or cross-sectoral issues. This means that while the SDGs have a greater alignment with government plans and policies than the MDGs had, ensuring that these plans are implemented in an integrated way, particularly at the sub-national level, will be a key challenge.

The means of implementation have been a key focus for the development of the SDG targets, in response to a perceived shortcoming when implementating the MDGs. The resources required are both financial and non-financial, and governance is either global or national.10 Cambodia will need to access both types of resources at each level to achieve the goals.

In 2017, Cambodia received US$1.35 billion in overall Official Development Assistance (ODA), an increase from 2016. However, the overall trend predicted from 2014 to 2018 is for falling ODA, with an increasing proportion of loans and a decreasing proportion of grants.11 Cambodia reached Lower Middle Income Country status in 2016 and is likely to move on from Least Developed Country Status within a decade. Conditions placed on soft loans by multilateral banks and preferential trade relationships are set to have the largest external influence on Cambodia’s development path. This influence will increasingly be exerted by China, which has become Cambodia’s primary source of ODA.12

Institutions providing Foreign Direct Investment (FDI) services have become more significant. his takes place through mechanisms such as the United Nations Framework Convention on Climate Change (UNFCCC)-led Green Climate Fund and the China-led Asian Infrastructure Investment Bank (AIIB). These financing mechanisms are designed to enable private-sector investment to be applied in partnership with the state to develop infrastructure and sustainability initiatives.13

The emergence of the AIIB in particular, led by China, has the potential to significantly change how Cambodia approaches meeting SDG targets. The stated intention of the AIIB is to complement and not compete with existing multi-lateral financing institutions. However, the development agenda of the AIIB has a commercial focus of economic co-operation on infrastructure over donor-led approaches that come with conditions that must be met. This focus is based on five principles stated in China’s 2014 White Paper on Foreign Aid. Some of these principles are controversial, including non-interference on sovereign affairs; having no conditions attached, particularly with respect to governance; and a commitment to the ‘One China’ policy with respect to relations with Taiwan.14

Cambodia’s national means of implementing Cambodian SDGs, while smaller in scale, have realized consistent growth in recent times. Cambodia has been increasingly funding its own development, through both tax and non-tax government revenue. For example, government revenue totalled $US 3.5 billion in 2016, or 18% of GDP.15 Taxation revenue as a percentage of GDP increased from 10% to 15% over the five years to 2016.16 These improvements have been driven by the government’s Resource Mobilization Strategy (RBS) 2014–2018. The aim is to improve tax administration through improving compliance with existing regulations without expanding the scope of taxation or the rate of tax.17

Public-private partnerships are another strategy that will likely be used by Cambodia to access resources for infrastructure requirements. A conservative estimated suggests US $12–16 billion of infrastructure investment will be required to keep up with the demands of urbanization and industrialization processes over the period 2013–2022.18

The RGC has approved a policy on public-private partnerships to facilitate an improved business climate for these partnerships to develop and address ongoing problems with corruption, uncertain government regulations, political instability, lack of access to reliable, adequately priced electricity and other problems that constrain investment in state-owned enterprises.19 The government is developing a Procurement Manual for Public Private Partnerships which is still in draft.20 This will inform the mechanisms the private sector may use to improve the provision of infrastructure as a strategy for better responding to SDG targets.

The Technical Working Groups are key to supporting the government to make decisions on how to continue to incorporate the SDGs into national and sub-national planning processes and strategies. While the SDGs have an increased focus on the means of implementation of the goals, not all SDG targets will be able to be addressed equally at the same time.21 Monitoring of the progress towards achieving the CSDGs is required to enable an understanding of the root causes for lack of progress, where bottlenecks exist, and potential linkages and trade-offs that can be made to overcome these limitations.22

The National Institute of Statistics (NIS) will be integral to improving the capacity for inclusive and participatory monitoring the SDGs across 28 different line ministries and other institutions, particularly at the sub-national level, where data is collected. The co-ordination of the monitoring and evaluation of this data is based on the functions of the 19 different TWGs to adapt planning processes and policies in response. This is essential for harmonizing local planning processes with national development priorities, influenced by the broader 2030 Sustainable Development Agenda.23

The effective communication of high-quality monitoring data in an accessible format to multiple stakeholders will be crucial. Because of the interdependence of each of the 17 SDGs, it will be important to maintain specific monitoring of each goal. It will also be important that this information is easily understood by the Cambodian people and used to improve the accountability of government ministries.24