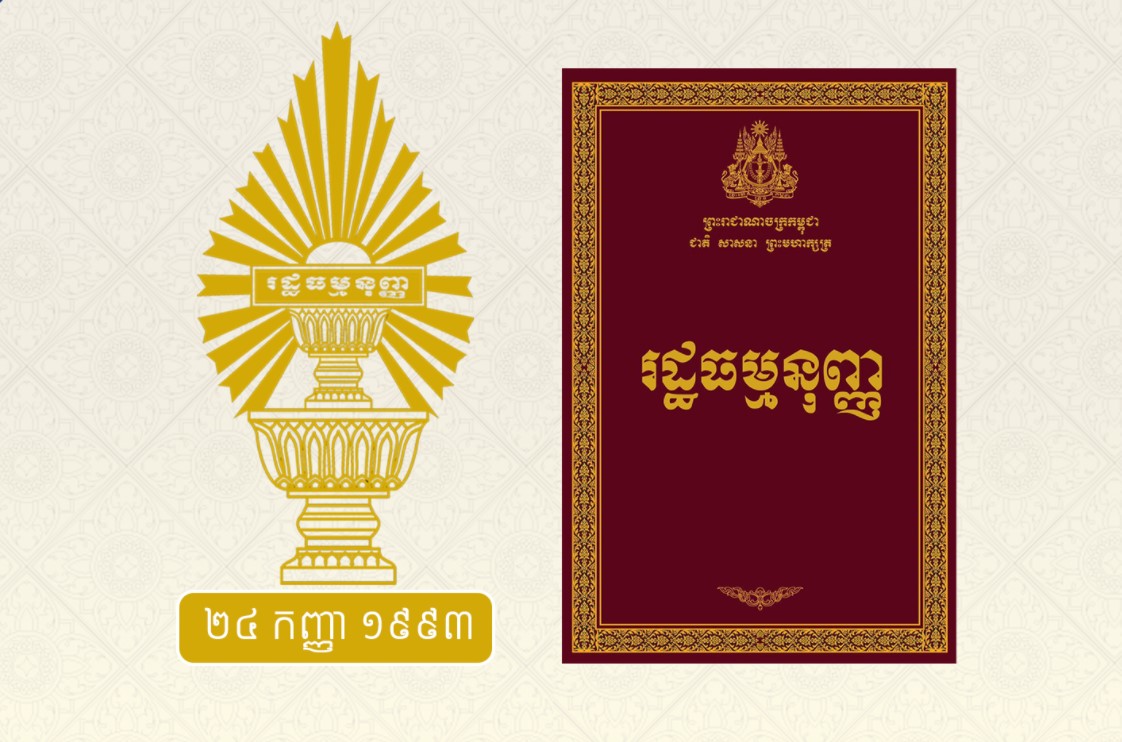 The Constitution of the Kingdom of Cambodia was officially promulgated by Royal Kram on 24 September 1993. Image designed by Open Development Cambodia (ODC), 10 September 2021. Licensed under CC BY-SA 4.0.

The 1993 Constitution of the Kingdom of Cambodia is the supreme law of the country. The Constitution was made with the support of of the United Nations and the international community in compliance with the 1991 Paris Agreement and is based on modern principles such as democracy, human rights, and the rule of law, and separation of powers:

The Constitution also reflects historical and traditional characteristics of the Kingdom: kingship, state religions and state institutions.1 The Constitution has been revised eight times in twenty-six years, in 19942, 1999, 2001, 2005, 2006, 2008, 2014 and 2018.3 4  In 2004, an additional legal procedure was adopted after a post-election constitutional crisis. This allows members of the National Assembly at the first meeting of a new mandate to modify the Constitution with an absolute majority of votes where there is a political crisis.5 The present Constitution of the Kingdom of Cambodia consists of 17 chapters:

The fundamental rights of Khmer citizens

The Constitution claims to recognize and respect all fundamental human rights in the United Nations Charter, the Universal Declaration of Human Rights and the Covenants and Conventions related to Human Rights, women’s rights and children’s rights6, and also a set of fundamental rights that are described by the Constitution7. Since 2003, the Royal Government of Cambodia has undertaken judicial and legal reform in order to ensure the effectiveness of the rule of law and the protection of human rights, which are protected by the Constitution. Thus, the government has established reform strategies, the most recent of which is the National Strategic Development Plan (NSDP) 2014–2018 and the Rectangular Strategy, which identify the priority actions to be carried out. These included the modernization of the legal framework, better dissemination and enforcement of the law, better and more significant allocation of resources for the functioning of the judiciary, the police and alternative dispute resolution mechanisms8. In 2014, three significant new laws were adopted : the Law on the Organization and Functioning of the Supreme Council of the Magistracy, the Law on the Statute of Judges and Prosecutors and the Law on the Organization and Functioning of the Courts. Phase 4 of the NSDP, published in 2018, continues to address government action in the search for more effective justice and a better guarantee of constitutional rights.9

These rights  can be found in the Constitution of the Kingdom of Cambodia including:10

These basic rights and freedoms are not absolute and are restricted by laws based on the right of others, public order, national security, social justice, public and social welfare, and the good moral and customs of Khmer society.11

The fundamental duties of Khmer citizens imposed by the Constitution

For the State, the Constitution imposes the duty and right to:

Related to Constitution and rights