Cambodia has begun to integrate disaster and climate resilience goals into its national policies but implementation remains difficult. In the National Action Plan for Disaster Risk Reduction 2014–2018, the government prioritizes the target to: “build a resilient nation and local communities to pursue sustainable development.” The National Committee for Disaster Management (NCDM) is tasked with managing disaster preparedness and response. Many obstacles, such as limited capacity, a lack of finances, inadequate analytics and a concentration on crisis response, impede the execution of these strategies. The mainstreaming of work to build resilience across sectors is also not schematized, but rather random, disadvantaged by limited technical expertise and catastrophe risk management budget allocations.1 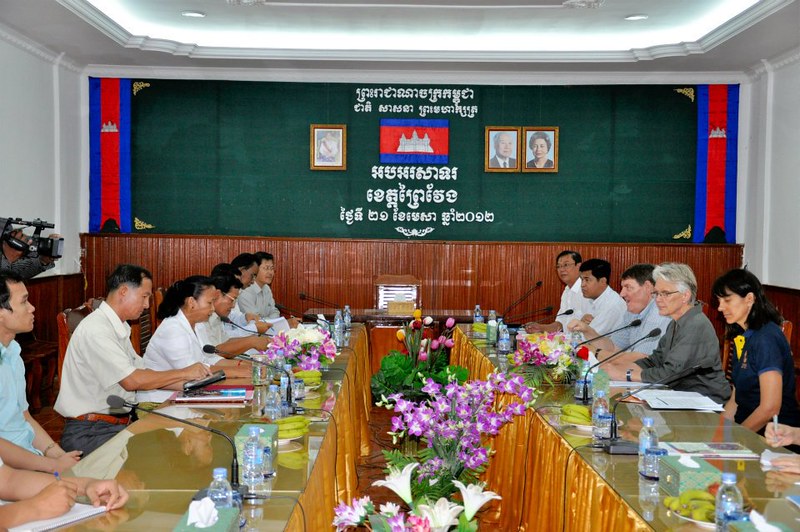 Under Section 7, Article 39 of the Law on Disaster Management (2015), the Government of Cambodia “shall have the appropriate reserves budget and resource to be ensured for the disaster management” including disaster preparedness, response, and recovery. The budget however is not cleared mentioned in the general and emergency response.2

Local governments have extremely inadequate revenue-raising authority and rely on central government transfers of public resources. Central government resource transfers in the form of block allowances frequently fail to consider the disaster-related work required of local governments.3 In 2010, for instance, the yearly Commune Sangkat Fund distribution did not include any additional supplement for villages impacted by Typhoon Ketsana the previous year.4

Over the last five years, Cambodia has accumulated a contingency budget of roughly US$ 115 million, which is held by the Office of the Council of Ministers and may be used to cover unpredicted expenses such as post-disaster spending. It is intended that less than 10% of the budget will be designated and spent for catastrophes in any single year. The amount to which the budget may be used for catastrophe recovery and reconstruction rather than other budget items is unclear and dependent on a variety of variables. As a result, minimal preparations are made around the budgeting required for disaster-related costs.

The Cambodia Food Reserve System was formed in 2012 by the government to support disaster-affected households by founding food and seed emergency reserves. The food supply is 16,000 tonnes of rice, of which 62.5% will be physical stock and 37.5% will be financial reserves. There are also 3,000 tonnes of rice seed and 50 tonnes of vegetable and other crop seeds in the total seed stock. There are presently no additional disaster funds or specialized risk retention mechanisms in place with the government.6

In the year to 28 October 2021, the government has estimated there would be around 388,000 people vulnerabilities (IDPoor) to flooding and needing humanitarian assistance. The government has provided direct food assistance responses including 1,200MT of rice to flood-affected households and recovery funding.7

Contingent credit can serve as a bridging finance instrument for a country's financial needs following a catastrophe. Cambodia does not currently have a contingent credit facility in the case of a disaster. The World Bank, Japan International Cooperation Agency (JICA), and private creditors provide contingent funding for catastrophe rehabilitation and reconstruction. Cambodia presently does not use any insurance mechanisms, such as risk transfer, to safeguard its budget from the effects of disasters. Individual government agencies have the option of insuring their public assets, which is typically dependent on budget availability.8

Many government agencies frequently use normal line agency budgets, particularly maintenance budgets, to pay relatively minor costs for catastrophe recovery. This strategy is consistent with government policy, which specifies that agencies should first use current resources by reallocating money within budgets before requesting new funds. However, it is unclear how much money has been shifted.9

The external debt for disaster relief is not clearly stated although it is to be expected that domestic and external borrowing will increase as a result of disaster events.10

There has been no recorded use of tax policy as a tool to collect additional revenue during catastrophes or to give tax breaks as an encouragement for donations to help with disaster funding in Cambodia.11

Cambodia received roughly $785 million in disaster relief aid from donors between 1990 and 2010. The funding was divided as 55% for emergency response and recovery, 35% for reconstruction and rehabilitation, and 10% for readiness and preventative efforts. The World Bank is one of the biggest contributors (25%), followed by the European Community (12%), the Asian Development Fund (10%), Japan (9%), the Netherlands (8%), and Sweden (6%).12

The US government, through the US Agency for International Development (USAID), gave an additional US$875,000 in humanitarian assistance to the World Food Programme (WFP) in April 2021 to boost disaster planning and response in Cambodia.13 Following a request from the Royal Government of Cambodia, the Japan International Cooperation Agency provided emergency relief goods in response to the flood disaster in October 2020. The flooding resulted in serious human and property damage, including 25 deaths, 37,396 evacuees, 56 collapsed and damaged houses and 73,720 inundated houses. Tents, water purifiers, blankets, generators, plastic sheets, sleeping pads and jerry cans were among the disaster relief supplies provided.14 Foundation for International Development/Relief (FIDR) responded to the request from the provincial government for assisting the post-flood rehabilitation by distributing vegetable seeds, foods, and drinking water during the 2011 floods.15

In early October 2020, Cambodia experienced heavy rainfall which led to flooding across 19 provinces. The flood caused 42 people’s deaths and left 2 million people exposed to flooding, with 800,000 people directly affected. Approximately 1,200 MT of rice was promptly given by the government as a food aid response. Other responders including the Cambodian Red Cross as well as UN and NGO partners in support of disaster relief.

The COVID-19 pandemic is exacerbating existing vulnerabilities, as seen in the flooding disaster in mid-2020.16