After the first general election in 1993, the government prepared and implemented a comprehensive micro- and macroeconomic policy and structural reform program to integrate Cambodia’s economy into the region and the world as well as stimulate its economic growth.1 In the two decades following that election, Cambodia achieved significant economic growth and development, with its gross domestic product (GDP) expanding at an average 7.6% a year between 1995 and 2014.2

Cambodia’s economic direction has been steered by a series of national economic plans and socioeconomic goals. The First Five-Year Program of Socioeconomic Restoration and Development 1986–1990 prioritized the development of the agriculture sector, infrastructure, and reconstruction.3 This was followed by the 1994 National Program to Rehabilitate and Develop Cambodia. It was seen as the first fully-fledged, comprehensive national program providing a long-term development vision and it became the framework for subsequent national plans. The first Socioeconomic Development Plan was created for the years 1996–2000, supported by the Public Investment Program, a 3-year rolling investment program.4 This was followed by the first Vision and Financial Sector Development Plan5 and the adoption of the National Poverty Reduction Strategy in late 2002.6 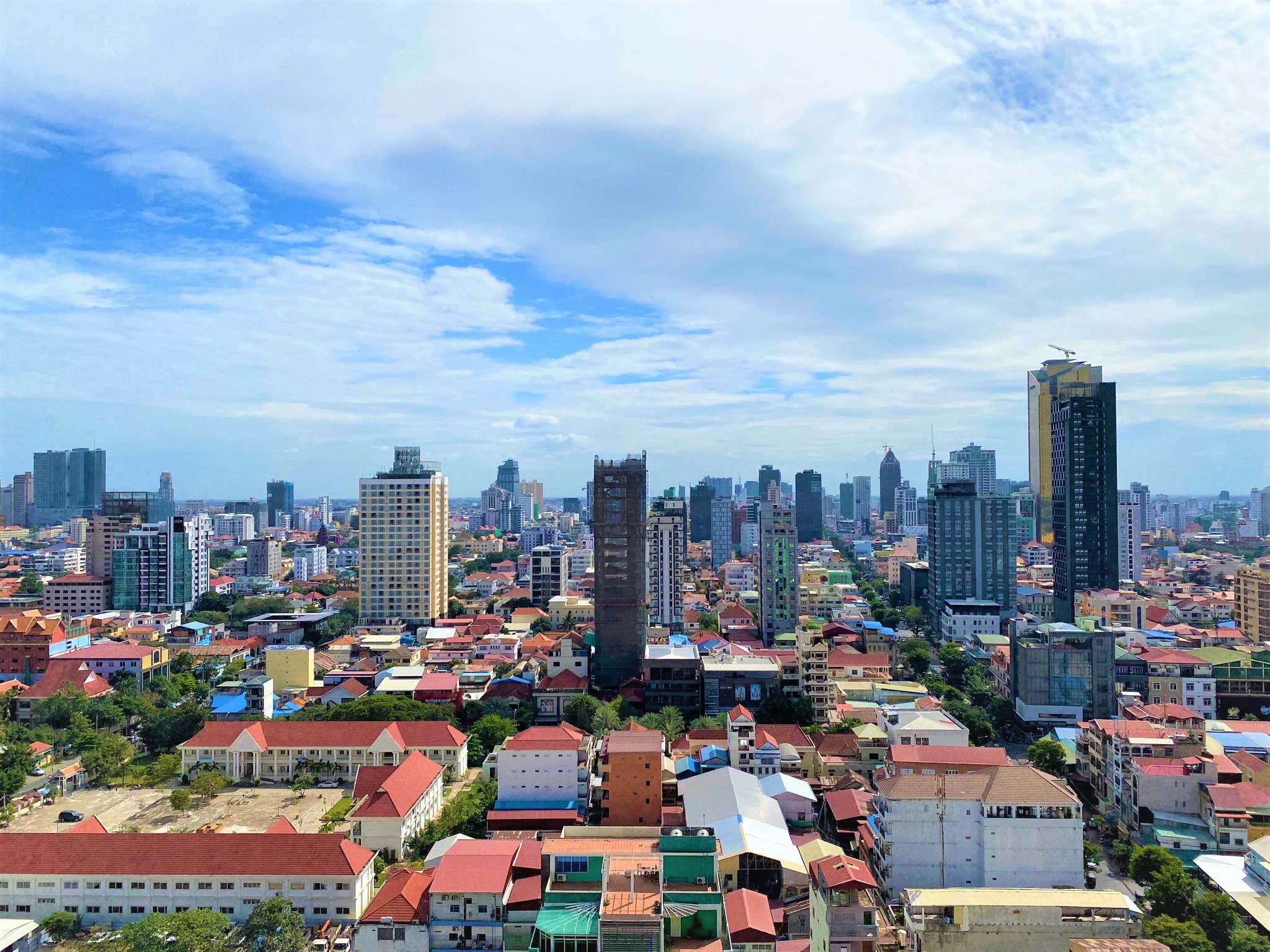 Since 2004, National Strategic Development Plans (NSDPs) have been pursued, under the Rectangular Strategy for Growth, Employment, Equity, and Efficiency. The Rectangular Strategy, periodically updated, has been adopted by the government as a guiding framework. The Rectangular Strategy represents the economic policy agenda of the political platform of the Royal Government of Cambodia (RGC) that was formulated as part of a comprehensive, consistent, interlinked and mutually reinforcing system.7 Within this, the National Strategic Development Plan emphasizes good governance as the core of the Rectangular Strategy and as the foundation for implementation of macroeconomic balances in trade, budget, and inflation and the promotion of growth and diversification.8 The purpose is to ensure a better quality of life for Cambodians in a democratic and rule-based society.9

Cambodia is committed to becoming an upper middle-income country by 2030 and a high-income country by 2050. Many policies have been introduced to ensure sustainable economic growth of around 7% per annum, to widen the growth base and enhance competitiveness while maintaining macro-economic stability10 and promoting sound financial management policies.11

Fiscal policy refers to the use of government spending and taxation to steer the economy. Governments typically use fiscal policy to promote strong and sustainable growth and reduce poverty.12 In Cambodia, fiscal policy has been a key tool for promoting economic growth, reducing poverty, and providing short-term demand stimulus in the context of highly dollarized economy.13 The Royal Government of Cambodia (RGC) has embarked on an ambitious Public Financial Management Reform Program (PFMRP) since 2004. The first stage focused on building budget credibility and the second stage focused on preparing for financial accountability.14

In the implementation of reforms in public financial management, objectives are:

Budget operations on both the revenue and expenditure side must be executed in accordance with established norms and procedures.16

The Government’s commitment to improving the collection of taxes and non-tax revenues includes strict implementation of the Law on Taxation, the reduction of corruption and tax evasion and dismantling of the culture of tax exemptions. At the same time, the government has committed to broadening the tax base, strengthening tax and customs administration, and the strict management of state assets including tangible and intangible properties, state enterprises and joint ventures.17

Thanks to a series of tax administration reforms, Cambodia has been able to boost its revenue collection significantly in recent years. Since 2008, among other reforms the General Department of Customs and Excises has successfully rolled out the Automated System for Custom Data (ASYCUDA) as well as enhanced anti-smuggling measures.18 More recently, in the context of the Revenue Mobilization Strategy for 2014–18, the General Department of Taxation (GDT) emphasized a shift toward a real regime and has improved its capacity in tax auditing and taxpayer services which lead to better compliance.19

Through prudent conduct of monetary policy, inflation has been managed at a low rate with an annual average of less than 5%, the level generally viewed as appropriate for developing countries. However, in the context of a highly dollarized economy, the National Bank of Cambodia is constrained in conducting  effective monetary policy.2122 Currently, monetary policy instruments used to achieve price stability are based on setting the reserve requirement rate and conducting foreign exchange intervention. At the same time, the National Bank of Cambodia is developing additional monetary policy instruments to enhance monetary policy effectiveness through issuing Negotiable Certificates of Deposit (NCDs), developing interbank and monetary markets, promoting the use of riel and so on.23

Exchange rate policy is also seen to be one of the key tools in the NBC’s monetary policy where the objective is to achieve price stability. By implementing the managed floating regime, the NBC has the ability to intervene in the foreign exchange market to maintain the exchange rate in accordance with determined objectives.24

The agriculture policy of the Government is to improve agricultural productivity and diversification by enabling the agriculture sector to serve as the dynamic driving force for economic growth and poverty reduction.26 Agriculture is an important economic sector, and efforts to increase its output further are critical to inclusive growth, because a large proportion of the workforce is engaged in the sector.27 In this regard, shifting the direction from expansionary or extensive agriculture to deepening or intensive agriculture, especially by increasing the yields using the existing land through intensification, has become the top priority of the Cambodian Government.28

Interactive map of the rice ecosystem and cropland in Cambodia

The Ministry of Agriculture, Forestry and Fisheries (MAFF) has recently introduced the Agricultural Extension Policy to ensure that farmers and their communities are able to acquire a better agricultural knowledge, skill and technology. In addition, the government also introduced the Policy Paper on the Promotion of Paddy Production and Rice Export. Milled rice export volumes increased by approximately 67% over the 5 years from 2014 to 2018.29

Cambodia is known to be a famous cultural and natural tourism destination.3031 Tourism has made steady progress and contributed to more than 10 % of national GDP in the 2000s. It is identified as a top priority sector and even labeled as “green gold” because it does not only create employment opportunities, promote people’s livelihoods and generate national income, but it also attracts domestic and foreign direct investment and the inflow of international currency, which contributes to the socioeconomic development of Cambodia as a whole.3233

The Government has introduced priority policies in the sector such as the Tourism Development Strategic Plan 2012–2020. This plan set out the vision for tourism development in Cambodia through a series of strategies including tourism product development, tourism marketing and promotion, facilitation of travel and transport, tourism impact management, safety, regulation and human resource development.34 The Ministry of Tourism is also obliged to implement other polices that ensure the growth and sustainability of the tourism sector, promoting investment in tourism as well as encouraging the Clean City, Clean Resort, Good Service and Good Hospitality and Clean Cambodia movement together with strengthening tourism industry quality with “One Service, One Standard”.3536

In the late 1990s, the Cambodian Government introduced its Industrial Development Action Plan (1998–2003) composed of two mains goals: the development of export-oriented industries and the development of import-substituting production of selected consumer goods. This was based on the understanding that growth drivers such as agriculture, tourism, garment manufacture and construction will not be able to ensure high growth in the long term.37

With the same goals, the Government introduced the Industrial Development Plan 2015–2025 to maintain sustainable and inclusive high economic growth through economic diversification, strengthening competitiveness and promoting productivity. This approach is based on an understanding  of structural changes in the domestic economy and demography as well as rising competition and vulnerability to external shocks.38

The Government is identifying and supporting potential new sources of growth in both existing and new economic sectors, implementing the Industrial Development Plan 2015–2025. It is formulating a strategy for the garment and footwear sector, improving the operation of Special Economic Zones (SEZs), preparing a master plan for the tourism sector, developing entertainment services, and encouraging natural resource development in areas such as the oil and gas industry.39

Tax exemptions have been provided on imported intermediate goods and on the exporting of finished goods.40 Recently, the Government revised the Law on Investment with the aim of attracting more investment by creating more openness and a favorable environment for investors, for example, the protection of rights and interests of investors.41

The private sector has been considered as the engine of economic growth, and the Cambodian Government has played a role of strategist, creating an environment conducive to enhanced private enterprise and managing the development process.4243 The government has initiated the Government-Private Sector Forum mechanism to create a platform for the private sector to discuss and bring up various concerns related to development. The purpose of the Forum is to strengthen and assist the private sector to become more productive and serve as a locomotive for economic growth. In addition, the Government has rolled out other supporting policies for bridging access to international markets and strengthening the legal framework for enterprise. It has developed laws, regulations and institutional capacity that facilitate business, trade and private investment, encouraging fair competition, transparency, accountability and fruitful partnership between private and public sectors.44

Another key policy of the Government is a commitment to the promotion of small and medium enterprises (SMEs). The Government has introduced policies to encourage and modernize Cambodian SMEs to become more competitive and productive so as to better integrate into regional and global value chains, especially with the adoption of digitalization in the era of Industry 4.0.45 Sub-decree No. 124 R.N.Cr.BK introduced a series of tax incentive for registered enterprises, including income tax exemption up from three years to five years for newly registered enterprises46 as well as the establishment of an SME Bank which aims to facilitate the access to financial resources for the development of SMEs.47

Integration into the region and the world

Integrating its economy into the region and the world has allowed Cambodia to gain considerably in terms of trade and FDI benefits. Growth in Cambodia was achieved by transitioning to a market economy with openness to trade and capital flows, supported by development assistance, preferential market access to the European Union (EU) and the United States (US)48 and FDI, with large net FDI flows estimated at 13% of GDP in 2018. China has become the single largest investor. For instance, in 2017 and 2018, China accounted for 23% and 26% of the total FDI, worth $2.7 billion and $3.1 billion respectively. It was followed by the combined FDI from ASEAN member states of 22% and 25% of total FDI in 2017 and 2018 respectively.49

In Cambodia, free trade significantly contributes to the reduction of poverty and improvement of the living standards of the people.5051 Since its accession to the World Trade Organization (WTO) in 2004 and ASEAN in 1999,  Cambodia has continued to liberalize its trade and ensure free flows of goods and services in regional and global markets.52 As stated in its Rectangular Strategy, the Cambodian Government has committed to strictly implementing its obligations under the World Trade Organization and to using this opportunity to embark on the reforms of all sectors in Cambodia so as to gain benefits in the WTO framework.53