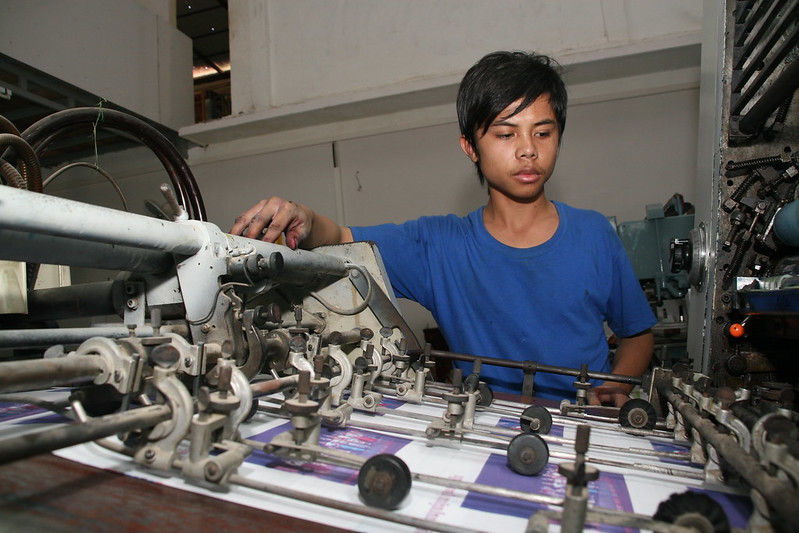 Small and medium enterprises (SMEs) have long been considered a vital driver to economic growth for developing economies.1 SMEs stimulate job creation throughout the country. Migration of employment to neighboring countries and the unemployment rate has significantly decreased due to a rising number of SMEs, which consequently results in poverty reduction.2

Like other developing countries, small and medium enterprises (SMEs) are a crucial part of the Cambodian economy, contributing to both economic and social development. They play an important role in: (i) creating jobs (ii) generating income for low-income people and vulnerable populations, and (iii) fostering economic growth, social stability, and contributing to the growth of a dynamic private sector.3

Statistically, the 2018 Annual Report of the Ministry of Industry and Handicraft, newly-named Ministry of Industry, Science, Technology and Innovation, indicated that SMEs play a significant role in contributing to Cambodia’s economy as they account for 70% of employment, 99.8% of companies and 58% of GDP.4

As the development of SMEs is significant to the robust and resilient economic growth of Cambodia,5 the Royal Government of Cambodia (RGC) has shown its commitment to support private sector-led growth and has introduced a series of policies concentrated on SME development. One among them was the establishment of the SME Sub-Committee in 2004 as the key body to organize SME development strategies.6 The key output of the SME Sub-Committee was the SME Development Framework approved by the Council of Ministers on 29 July 2005, and officially launched by the government on 21 February 2006.7 The SME Development Framework aims to “create a conducive business environment, which will lead to a competitive SME sector contributing to the creation of quality employment and improve the range of goods and services available to the people of Cambodia.”8

Before 2005 there was no collective definition of SMEs in Cambodia between the National Institute of Statistics (NIS) and the Ministry of Industry and Handicraft (formerly known as the Ministry of Industry, Mines and Energy)9. Not until July 2005, when the Government of Cambodia SME Sub-Committee was established, was a definition officially provided to eliminate confusion.10 Nevertheless, the definition of SMEs in Cambodia is different from some other ASEAN countries in terms of the main indicators. For instance, the Philippines uses exclusively fixed assets as a criterion for distinguishing enterprises by size. Indonesia uses assets and annual sales, while Vietnam defines SMEs by number of employees and the total value of the enterprise’s capital. In Lao PDR, micro enterprises are those employing five employees or less.11

In Cambodia, there are 4 categories of enterprises, namely micro, small and medium enterprises (MSMEs) and large enterprises. The micro enterprises are unsystematic and dominate the SME sector.12The SME Development Framework, developed by the SME Sub-Committee of the Private Sector Steering Committee, classifies SMEs according to the number of their employees (based on equivalent full-time employees) and the size of their assets. SME Sub-committee classifications are provided in Figure 1.13

Based on the 2017 Annual Report of the newly-named Ministry of Industry, Science, Technology and Innovation, the numbers of small and medium enterprises (SMEs) and large enterprises totaled 15,707 and 1,522 respectively. The micro-enterprises with a number of employees less than 10 amounted to 139,933.15 It is important to note that employment of women in SMEs outnumbered employment of men in all categories of size. Women’s businesses are concentrated in a smaller number of industrial sectors.16

In Cambodia, the SMEs are categorized into three main sectors:

Despite a growing number of registered SMEs, there are many challenges facing entrepreneurs and government in the development agenda for SMEs. Challenges listed in Cambodia’s Industrial Development Policy 2015–2025 and other studies include:26

The RGC continues to support the promotion and development of SMEs and entrepreneurship by setting a major focus on SMEs in its key policies covered in the Rectangular Strategy (Phase IV).33 The government aims at supporting SMEs regarding productive activities, decent job creation, entrepreneurship, creativity and innovation, and encourages the formalization and growth of these enterprises, including through access to financial services. All these targets were set in Goal 8 of the Cambodian Sustainable Development Goal Framework 2016-2030 (CSDGs).34 In order to develop an efficient framework for SMEs, the government offers an attractive tax incentive to SMEs that register voluntarily. In January 2019, the nation’s tax body issued a notification on the implementation of Sub-decree No. 124 ANKr.BK, which sets up tax incentives for SMEs in selected industries.35

In Cambodia, there is no specific law to regulate SME. However, the government announced a commercial legal framework for the period of 2005–2010 under the Ministry of Industry, Mines and Energy (MIME) and set up a Sub-Committee to the SMEs.36 Currently, the Ministry of Industry, Science, Technology and Innovation (previously known as Ministry of Industry and Handicraft) is in charge of policy implementation for SMEs. The SME legal framework has its main focus on regulatory and legal instruments, especially regarding business registration, access to finance as well as SME support activities.37 This initiative was undertaken to reduce the number of informal SMEs and the tax incentive has been considered another in-line mechanism to achieve this objective.38 The SMEs have to register their business formally and follow mandatory regulations such as proper bookkeeping in order to benefit from the tax incentive.39

The tax incentive has been placed as an encouragement to bring SMEs into a legal environment. The General Department of Taxation (GDT) of the Ministry of Economy and Finance has enacted Sub-Decree No. 17 ANKr.BK (“Sub-Decree 17”) to incentivize the SMEs as taxpayers in the following way:

(2) An annual 1% minimum tax (and monthly prepayments) during this exemption period.40

Moreover, Sub-Decree No. 124 ANKr.BK, effective from 2 October 2018, aims at incentivizing the SMEs in six priority sectors, ranging from agro-agricultural products to IT services, and those located in the SME Cluster Zones including enterprises in the process of developing Cluster Zones.41 The incentives include an exemption from tax on income for three years for newly registered enterprises and for five years if additional requirements are fulfilled. An exemption from the monthly 1% pre-payment of tax on income and annual minimum tax during the tax on income exemption period is also applicable.

The Sub-Decree No. 124 ANKr.BK applies to SMEs which are defined in the regulation based on their annual turnover and number of employees.42 In general, the SMEs are determined by less than 100 employees and less than USD 500,000 in estimated annual turnover. Under the current tax (self-assessed or real) regime, taxpayers are categorized into small, medium, and large taxpayers.43The type of taxpayers in this categorization are different from the general definition of SMEs in Cambodia as mentioned above. To assist the implementation of Sub-Decree 124 amid the COVID-19 outbreak, the Ministry of Economy and Finance issued Prakas No. 159 dated 17 February 2020 setting out guidance, conditions and procedures to request the tax incentive.44The newly established government agency, SME Bank of Cambodia, is expected to play a critical role in promoting SMEs. Its establishment was approved on 17 May 2019.45 The SME Bank was officially launched in early 2020 with initial capital of $100 million to provide financing for SMEs.46 According to a press release issued by the Ministry of Economy and Finance, the bank is undertaking an “SMEs co-financing project” in a joint venture with 23 commercial banks, two specialized banks and seven microfinance institutions (MFIs).47