Water plays a fundamental role in any country’s development. Cambodia has a very specific bond to what has been called the blue gold, as it is regarded as an exceptionally endowed country in terms of water resources. Phnom Kulen (Mount Kulen), at the center of the former Khmer empire is famous for its sacred waters, and the former capital, covering a wide area around Angkor Wat, had one of the most sophisticated irrigation systems in the world at that time.1 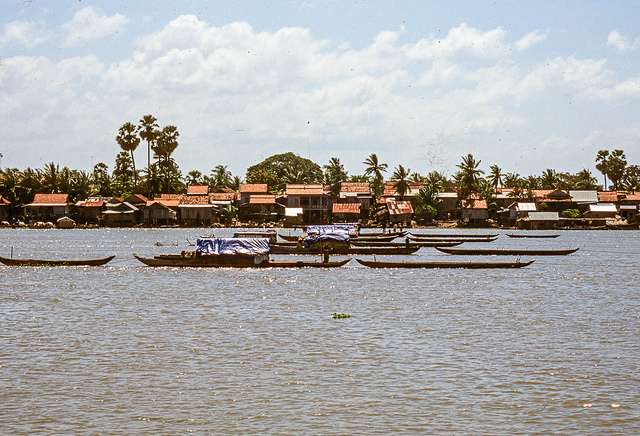 Cambodian is highly reliant on freshwater rather than on coastal areas in terms of the inland fisheries that support livelihoods and form the main protein source for the Cambodian population, but also due to  its tropical climate that bring alternating seasons of shortage and surplus of water.

The Mekong River and the Tonle Sap are essential for Cambodian hydrological system, and are the main resource for Cambodian protein supply, which is estimated to worth 2 billion USD annually.2 It is however changing as the population is growing and the demand for water is increasing with a lack of effective safeguards. Economical growth led to an important need for water for industry and agriculture, which brought competition between different sectors, affecting water quantity and quality.

Cambodia has a dependency ratio of 74.7 percent for its renewable freshwater, which indicates that almost 3/4 of Cambodian water is received from another country, namely the Lao P.D.R. via the Mekong.3 Up to 471.51 km3/year flows out of the country to Vietnam through the Mekong and its tributaries. This emphasizes the critical inter-dependency of Mekong states, and their sensitivity to the actions of neighboring countries, particularly those that are upstream. Freshwater is mostly fueled by rainfall, while forest catchments and watersheds are important for its production and regulation.

Aquaculture, supported by adequate and unpolluted freshwater flow from upstream, is a major pillar of  Cambodia’s economy.4 It boomed within the past few years, with 120,055 tons of fish produced through aquaculture in 2014, which is twice the figure of 2010.5

The sediment balance in Cambodian lakes and rivers is changing. In part due to construction of upstream dams, erosion of sediment in some parts of the Mekong is unusually high, leading to changes in fish ecology and modifying soils’ fertility. Sediments contain essential nutrients for plant and fish species. A shift in the sediment balance may affect the Mekong’s productivity, especially fish and rice production. The Tonle Sap Lake is of particular importance for its hydro-dynamical connection with the Mekong river, along with their many tributaries and other related water bodies.

The Tonle Sap ecosystem and its functions are defined by their interaction with the Mekong. Both water plans are vastly changing depending on the season.6 The seasonal rise of the river during the wet season reverses the water flow from the Mekong to the Great Lake, filling the lake with water and sediments. This worldwide unique flood-pulse system is especially fragile, and the long-run ecological effects of a changing water and sediment supply remain not well understood.7 Overall, infrastructure building are limiting the sediment continuity along the Mekong.8

The Ministry of Water Resources and Meteorology (MOWRAM) was established in 1993 to develop and govern Cambodia’s water resources, and oversees irrigation development and flood control.9 MOWRAM is also responsible for fresh and marine water resources management while the Ministry of Rural Development (MRD) is in charge of rural water supply sanitation.10

Cambodia’s water resources are managed under the 2007 Law on Water Resources Management.11 The effective and sustainable process of irrigation development and the management of water resources remain challenges for some stakeholders including farmers, government agencies, the private sector and a range of development organizations.12

In February 2019 MOWRAM announced that it was planning to develop a water data center.13 The center is part of the national investment programme on irrigation systems and water resource management 2019–2033. The ministry said that data from the center would help with the management of water from the five river basins and 39 sub-river basins.

The Mekong River, particularly the Lower Mekong Basin (LMB), has been identified as a region that is highly vulnerable to the impacts of climate change.14 Climate change will affect the water cycle, bringing change in the hydrology of major rivers and tributaries as well as groundwater recharge. Disasters in the form of flood or drought greatly affect the country’s people and economy. In March 2016, for example, the Mekong river was 30–50% lower than its average level for that time of year.15 In May 2016, the National Committee for Disaster Management said that 2.5 million people in Cambodia were directly affected by drought.16

Water ecosystems are also potentially threatened by changes in land use, infrastructure development and degradation through unsustainable agricultural and fishing practices. In particular, the specific ecosystem of the Tonle Sap is of most concern for its frailty.17

Large hydropower projects on the Mekong River and its tributaries that are planned or under construction by several Mekong countries, are likely to have significant negative affects on downstream communities and countries.18

The Mekong River Commission noted in October 2017 that Cambodia and Vietnam currently lack a system to effectively forecast and control flooding in the Sesan and Srepok river basins.19