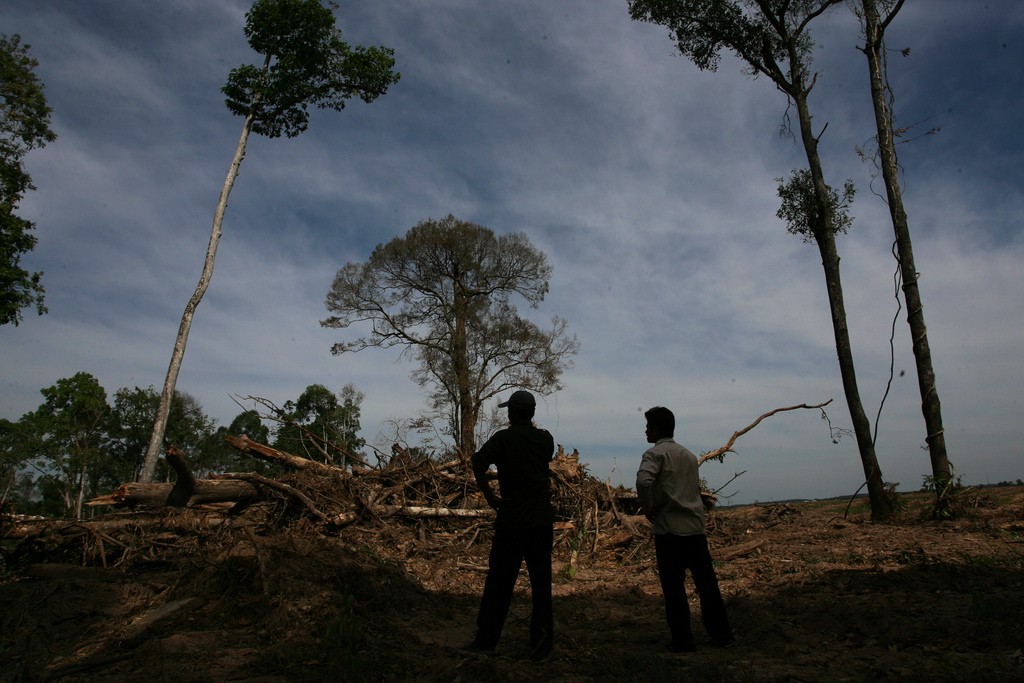 Seuon Roan (left) and his village fellow at the cleared land where his resin trees once stood, in O Preah village, Kratie province. Photograph by Oxfam GB Asia, taken on 1 January 2000. Licensed under CC BY-NC-ND 2.0

Cambodian forest cover has reduced dramatically in recent decades. In 1973 there were 13.1 million hectares of total forest, but by 2014 the total cover had fallen to 8.7 million hectares. For the first time in the 41-year period, the percentage of non-forest ground cover (48.4%) was larger than that of forest cover (47.7%).1

Most of the loss was dense forest – old-growth forest, mostly evergreen, largely undisturbed – which fell by more than half, from 7.6 million ha to 3 million ha. That is the equivalent of losing an area of dense forest bigger than an entire country like Denmark.

In October 2017, newly released data showed that Cambodian forests were cleared in 2016 at a rate 30 percent higher than in 2015.5 Released by the University of Maryland, the data looks at forest cover loss globally using satellite imagery. Not only was 2016 worse than 2015 in the data, but in the 16 years deforestation has been measured, 2016’s loss of around 200,000 hectares was the fourth-worst.6

The Ministry of Environment disputed the data.7 Minister of Environment general director of natural resources, Chea Sam Ang, told local media at a REDD+ event that Cambodia is looking to Japan to help pay for data from US satellites to examine forest cover.8

Concerns over the dramatic loss of forest cover in Cambodia have been expressed by many organisations and individuals and in many ways. Cambodia’s Millennium Development Goals, for example, include a specific target of maintaining forest cover of at least 60% by 20159 (part of Goal 7). This was not met. As noted above, current forest cover is already much lower, at around 48%.

How forest cover is calculated

Satellite images of Cambodia going back to the 1970s are publicly available. Images on which calculations are based are selected on their quality and the absence of cloud cover. Because there are wet seasons and dry seasons and the land obviously looks greener in the wet season, when images were made during the year also has to be considered for consistency.