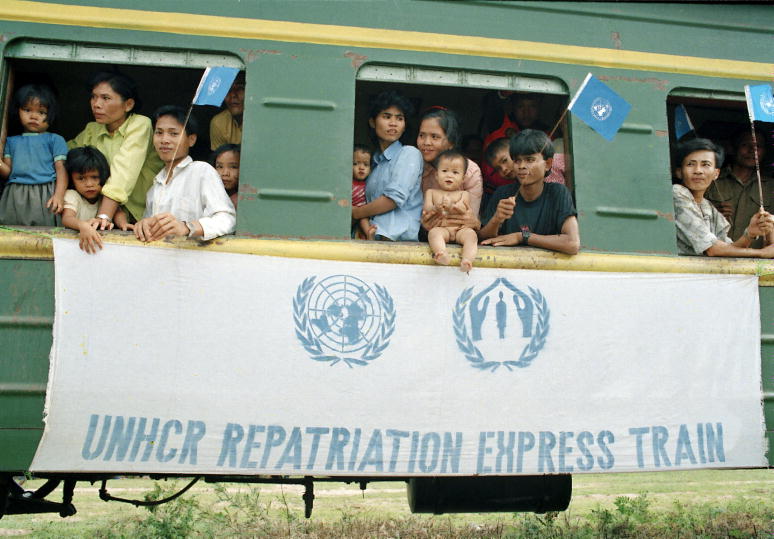 Cambodians returning from refugee camps aboard a UNHCR (Office of the United Nations High Commissioner for Refugees) train. Photo by UN Photo/P Sudhakaran, taken on 28 August 1992. Licensed under CC BY-NC-ND 2.0

Since the Paris Peace Accords in October 1991, Cambodia has received significant global support for its development and post-conflict rehabilitation work. This has included direct aid, development loans and infrastructure funding from bilateral, multilateral, and private donors.

In 2016, Cambodia received US$729 million in official development assistance,1 or 28 percent of government expenditure.2 While that is a significant proportion, it is nevertheless a significant drop from earlier years. ODA made over 61 percent of the government’s budget in 2010, for example.3

Three big donors have been Japan, the Asia Development Bank (ADB) and the United States of America:

The World Bank, which had been a significant actor, placed a freeze on new loans in August 2011 after being criticised for its support for a land titling scheme for victims of forced eviction from Boeung Kak lake in Phnom Penh. However, the Bank announced in May 2016 that it would issue $130 million in new loans to Cambodia to fund poverty reduction projects.8

Chinese support is strong.  Several soft loan and grant agreements have been signed during Prime Minister Hun Sen’s Beijing visits in 2013 and 2014,9 and Aid Data reveals 102 projects officially supported by China from 2010-2014, totalling more than US$3.9 billion.10 However, because China does not classify its assistance according to the same ODA standards as other donors, the actual amount of aid can only be estimated by “ODA-like” flows.

The most substantial other donors are signatories to the OECD’s Development Assistance Committee (DAC)  principles , but donor coordination remains inadequate in Cambodia. Given the country’s reliance on foreign aid, this yields a development policy environment in which disbursement structures are often opaque.

The current development agenda of the Royal Government of Cambodia (RGC) is governed by two strategy documents:

There is no explicit legal framework solely regulating donor and development assistance in Cambodia. Despite the lack of a specific law, the Cambodian Rehabilitation and Development Board (CRDB) under the Council for Development of Cambodia (CDC) is the authorized focal point for aid management.

A legal framework governing the work of local and international non-governmental organizations (INGOs), including the development partners, is mandated in the Constitution of the Kingdom. The Cooperation Committee for Cambodia estimates that out of 508 INGOs registered in Cambodia, 322 were active in 2011.12

Development policy in Cambodia is primarily formulated by the government, particularly through the CDC and its CRBD. CRDB/CDC coordinates the policy by involving line ministries, donors and civil society through technical working groups.13 Cambodia’s donor and development assistance policy is to a large extent based on MDGs and measured through Joint Monitoring Indicators (JMIs)  of the government and external donors.

With the target date for the MDGs passing in mid-2015, attention is now focused on the United Nation’s 17 Sustainable Development Goals (SDGs) adopted by UN member nations in September 2015.14 These set a much broader development agenda for governments and aid organizations alike.

Cambodia was upgraded from the low-income category to lower-middle-income status in July 2016 by the World Bank.15 The reclassification was based on the Bank’s estimate of Cambodia’s gross national income (GNI) per capita for the previous calendar year.