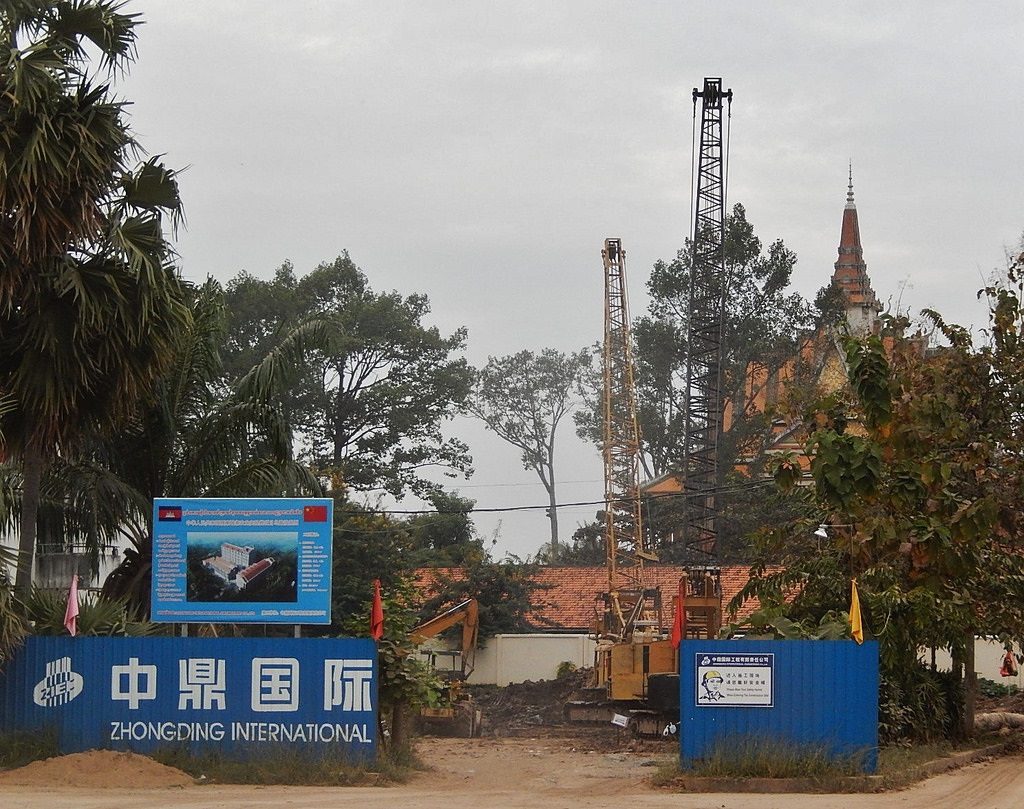 Construction of a laboratory funded by Chinese money. Photo by Michael Coghlan, taken on 10 January 2014. Licensed under CC-BY-SA 2.0

China, while once being at odds with the current government, is now Cambodia’s largest development partner. The two nations have grown increasingly close in recent years, which has been a boon to Cambodia. China as a development partner with Cambodia is not exactly the same as the relationship Cambodia has with its bilateral donors. The funds given by China come in many forms, but the vast majority of it is cooperate investment and non-concessional loans.

By corporate investment what is meant is direct capital investment from a Chinese company in order to build or work on a project, or provide funds to an existing Khmer company. This type of aid is called Foreign Direct Investment (FDI). FDI is not charity. While it does in some way benefit the recipient country, there is a great debate as to who benefits (and who is harmed) most. FDI has contributed to Cambodia’s economic growth, but it has done so in ways that may not have been in the best interest of the Khmer people.

China does not donate to Cambodia through most normal channels so tracking the exact figures is challenging. China’s official investment into the Cambodian economy has totaled US$ 2,219,914,520 since they first started in 2004, and has become by far the country largest1 – culminating in US$4.92 billion from 2011 to 2015.

As has been mentioned, China makes up 70 percent of the total industrial investment in Cambodia.2 Chinese investors are actively engaged in trading, construction, small-scale and light manufacturing, and food processing.3 That is being said, China has no unified development strategy that guides investment. Each investment is distinct from each other.

As part of the partnership agreements with China, there has been an increased level of bilateral trade between the two countries. In 2017, bilateral trade between the countries will increase to $5 billion annually. It is this type of “south/south” relationship that the Royal Government of Cambodia seeks to foster and support in order for the country to be less dependent of foreign (and particularly western) aid. Chinese investors are consistently the largest single foreign investor in Cambodian business. Additionally, almost 90 percent of total foreign investments come from regional Asians investors.

“Aid” between the two countries is not restricted exclusively to financial aid packages. In November 2015, China agreed to further its already substantial military support. (In 2013, Cambodia bought 12 military-grade helicopters on a $195 million loan from China. In February 2014, Cambodia was given 26 trucks and 30,000 military uniforms from China. In Kampong Speu province, China has funded a military training facility, and in recent months they have jointed run military exercises in the South China Sea.) by providing Cambodia with a military assistance package of an undisclosed value.

China also provides loans to the RGC. These loans are not the type of recipient friendly loans that DAC members give. According to Vongsey Vissoth, a secretary of state at the Ministry of Economy and Finance, Cambodia has acculturated roughly $2.7 billion worth of debts to China. These loans do not have conditions attached like many other countries, allowing the funds to be used in any way. This is exemplified by the prime minister’s 2006 remarks, “China talks less but does a lot.” This type of aid has allowed China to become the strongest supporter in  infrastructure projects (e.g. roads, bridges and public buildings).

China has undertaken some of the most challenging project in Cambodia, and they are usually finished faster when compared to Cambodia’s other investors.4 These projects include dams, factories, and military bases. However, it should be noted that China pays more attention to investment procurement than it does with oversight of the projects, transparency, and post-project evaluation and maintenance.5

It has also been claimed that this model for intervention free aid better allows the recipient country to grow independently from foreign interference and value projections. By supporting infrastructure and job building projects, China appears to be allowing Cambodian society to progress on its own. The veracity of the progress, however, is in doubt.

Chinese investment into Cambodia is both a boon to the country and has raised some concerns from critics. The RGC has began to lean more heavily on Chinese financing due to growing pressures from other donors to address its alleged human rights and democratic governance violations. Additionally, on 7 June 2016, China announced that it provides US$450 million in development aid to Cambodia over the next “few years.” The timeframe and purpose of this aid has not yet been made public.

Since Chinese funds come mostly for investment in business and construction, Chinese businesses have been given a great deal of land for construction projects. Land conflicts have often been resolved with evictions.6 These evictions have been increasingly giving Chinese investment a bad reputation.

China professes a policy of never interfering in the internal affairs of foreign lands. But in Cambodia, growing public fury over land grabs to make way for development projects involving Chinese investors has pushed Beijing to the center of one of this Southeast Asian nation’s most sensitive social and political issues. “I had hoped that Chinese companies would help bring prosperity and development, but instead they brought only problems,” said Tep Vanny, who has helped spearhead a long campaign against forced evictions in the capital.7

For a complete profile of these economic land concessions and the issues that come with them please see our Economic Land Concessions (ELC) topic page.

Despite their large amount of investment, there are no Chinese or Chinese-funded non-governmental organizations in Cambodia. This is significant due to the fact that China has been criticized for not paying attention to Cambodian civil society while implementing its investment aims.8