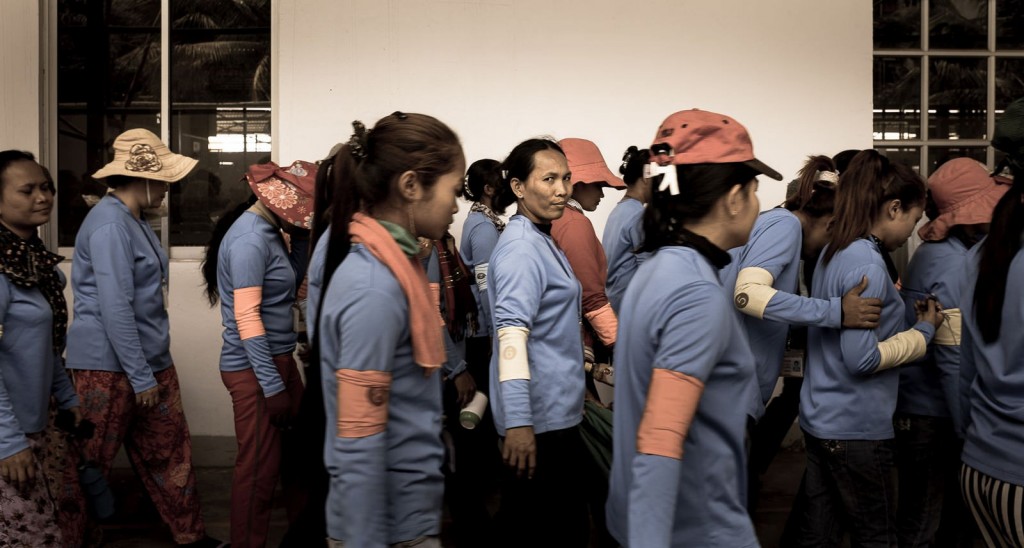 Garment workers waiting in line to get food. Photo by International Labour Organisation, taken on 14 July 2015. Licensed under CC BY-NC-ND 2.0.

Cambodia has the highest labor force participation rate in the Southeast Asia/Pacific region, with 82.7 percent of the working population aged 16-64 employed or seeking employment.1

Cambodia’s working-age population is growing faster than its total population – 2.4 percent compared to 1.9 percent over 2007–2015.2 This is different to many Asian states. It is a good position to be in because it is an opportunity for economic growth. Cambodia adds an average 164,000 people to its labor force each year.3

Unemployment is less than one percent and youth unemployment 1.6 percent.4 Both of these figures are the lowest in the Asia/Pacific region.5 (The labor force participation rate and unemployment rate do not add to 100 percent.)

The biggest change in the labor sector by far has been the decline in the number of people working in agriculture. An Agriculture Ministry study released in June 2017 states that around 80 percent of the population worked in agriculture in 1993, but by 2017 the figure had halved to 40 percent.6 The fall is comparable with what happened in other Asian countries such as Thailand (77 percent down to 32 percent) and the Philippines (56 percent down to 29 percent). The fall is the result of the move to larger-scale commercial farming, machinery replacing labor, and diversification in the wider economy.

Since 2012, non-agricultural sectors such as services and industry have been the main source of job growth.7 The percentage of people who are wage or salaried workers (employees) grew from 29.8 percent in 2010 to 48.9 percent in 2014. By contrast, ‘contributing family workers’ fell from 19.4 percent to 3.6 percent over the same period.8

In 2015, garment and footwear manufacturing accounted for 7.3 percent of total employment and the construction sector, 6.5 percent.9

The World Economic Forum’s Global Human Capital Report 2017 gave Cambodia the poorest score in ASEAN for educating and training its citizens to develop a competitive workforce and put their skills to productive use. Cambodia ranked 92nd out of 130 countries in terms of human capital development. While this was up from 100 in 2016, Myanmar and Laos both made comparatively bigger improvements. Myanmar jumped from 109th in 2016 to 90th in 2017 while Laos went from 106th to 84th.10 Looking at the breakdown of the overall rating, it was education where the country scored particularly poorly. In contrast, the subratings for labor force participation, the workforce gender gap and the underemployment/unemployed rates were amongst the best in the world.

The shortage of skilled workers has been shown in various surveys, including one by the National Employment Agency in 2017. It found that 77.9 percent of employers in the hospitality sector faced recruitment difficulties. Altogether, almost half of the 605 employers in the survey who had vacancies had problems finding suitable staff.11

While the Cambodian economy moves from heavy dependence on agriculture to industry and services, the now jobs created are largely low-value positions – two-thirds are in construction, hospitality, and other services.12

Rights of employees and employers are protected under Cambodia’s laws. The Labor Law 1997 prescribes conditions of labor contracts, contractual relations, employees’ and employers’ rights of association (unions) and assembly (strikes and lockout), institutions (Ministry of Labor and Vocational Training (MLVT), Labor Advisory Committee, Arbitration Council and courts), and procedures for conflict resolution. The enforcement of this law is detailed by sub-decrees and prakas.

In early 2015, the MLVT started to implement the requirement for work permits for foreign workers13 and outlined procedures for recruitment of foreigners14 as provided in Chapter 10, Section 2 of the Labor Law.

The government has said it is working toward the establishment of a labor court in Cambodia.17

The safety and health of workers is a concern in every sector. Working and living conditions of workers in the garment and textile industries have long been in the news headlines, and since 2013, has drawn international attention. Workers face poor ventilation and heat, chemical exposure and fumes, while their living conditions may be threatened by malnutrition due to low minimum wages and living standards. For instance, fainting is relatively common.18

The transport of workers in large open-top trucks has also been a safety concern for both garment and construction workers, as highlighted in May 2015 when 19 people were killed and 20 others were injured in a single accident while on their way to work.19

In 2015, according to the National Social Security Fund, 181 workers died as a result of work-related accidents. There were 2,073 reported cases of workers fainting.20

While the Labor Law guarantees a safe working environment, safety standards are few, and without sub-decrees on heath and safety for industries such as construction, enforcement is impossible.21

In November 2016 the government signed off a sub-decree establishing a National Committee for Health and Work Safety. This body, including officials from different ministries, will review information related to health and work safety and give advice to the government.22

The Minister for Labor established the Arbitration Council in 2003 to resolve labor disputes through the tripartite approach of bringing employer, union and government representatives together. The council received 361 dispute cases in 2014, a 27 percent increase on the previous year and more than ten times what it received in 2003. While the council resolves 73 percent of the cases taken to a hearing, 38 percent are either withdrawn or reconciled between parties before the council issues an award.23

The official minimum wage set by the Ministry of Labor and Vocational Training for the garment and textile industry in 2013 was US$80 per month.24 The Labor Law sets the guidelines for establishing the minimum wage, however, until recently, reviews and increases were irregular. In 2009 the average monthly earnings across the country was KHR 314,665 (approximately US$77).25 While it is not the largest employment sector, some see the minimum wage for Cambodia’s garment and textile industry as a benchmark for wages in other sectors.26

Following large-scale strikes and publicity for the sector, the Labor Advisory Committee (LAC) of the ministry increased the minimum wage for garment sector workers to US$128 as of 1 January 2015.27 The price of electricity for low-income Cambodians was also reduced to KHR 610 per kilowatt to ease pressure on the cost of living for low wage earners.28

The minimum wage for the garment sector in 2016 rose to US$140 (including a US$5 government subsidy).29 The minimum monthly wage for 2017 was $15330 and for 2018, $170.31 The ILO has noted, however, that “…on average, the base rate of pay makes up only around 65% of Cambodian garment workers’ take-home pay, suggesting that elements of pay other than the minimum wage itself are quite significant.”32

Public service wages have also grown significantly in recent years. An April 2018 World Bank report said that the minimum wages of civil servants in 2018 were almost triple the wages in 2013.34

Together with loss of land, migration within the country for work is responsible for the move away from agricultural labor37 to garment and construction work. Also, work concentration in only few parts of the country may be another contributing factor for the growing migration nationwide.38 Migration happens en mass from the rural areas to the capital city and its surrounding provinces.39

The number of Cambodians working overseas stood at 350,485 in 2010,40 but grew quickly in the following years. In April 2017, Labor Minister Ith Samheng was quoted saying that more than one million Cambodians worked overseas41 and in May 2019 he was quoted as saying the number was more than 1.2 million.42 As a result of a push within Thailand to get illegal workers to register, by August 2017, 203,732 illegal Cambodian workers in Thailand came forward as a first step to getting the correct paperwork.43

There are enormous differences in the estimates of the amount of money that Cambodians working overseas send back to their homeland. The World Bank estimated US$400 million in remittances in 2018.44 The National Bank of Cambodia estimated $1.4 billion,45 while Labor Minister Ith Samheng was quoted in May 2019 that Cambodian overseas send over $2.3 billion back to Cambodia each year.46

In 2017, 986 migrant workers were repatriated to Cambodia from Thailand, Vietnam, Laos, Myanmar, Malaysia, Indonesia, Singapore, China and Japan, an increase from 816 in 2016.47 “Most of them were workers and maids who had difficulties with their employers, suffered abuse at work or were cheated by brokers into working abroad illegally,” a Foreign Ministry report was quoted as saying.48

The 2018 Global Slavery Index ranks 167 countries based on the proportion of the population that is estimated to be in modern slavery. Cambodia sits in 9th position (where 1 has the most slavery)49 with an estimated 261,000 people living in modern slavery. Modern slavery typically refers to conditions such as debt bondage and other types of forced labour, such as trafficked labour.

Child labor and debt bondage – where someone is effectively forced to work to repay a debt – are both illegal in Cambodia, but an investigation by the NGO Licadho in 2016 suggests both practices can be found in brick kilns.50 A 2019 report from Save the Children, Changing Lives in our Lifetime, says Cambodia is making excellent progress towards eliminating child labor. The report says that the prevalence has fallen from 43 percent of children in 2001 to 9 percent in 2019, a drop of 78 percent.51 This reduction is significantly higher  than the global average and higher than any other Southeast Asian country.

The 2018 Trafficking in Persons Report published by the US State Department says that “The Government of Cambodia does not fully meet the minimum standards for the elimination of trafficking; however, it is making significant efforts to do so…The government demonstrated increasing efforts by prosecuting and convicting more traffickers, repatriating more Cambodians subject to trafficking abroad, strengthening efforts to raise awareness on child sexual exploitation in the hospitality industry, and taking steps to incentivize safe migration to primary destination countries.”52

Cambodia’s shares its ranking at Tier 2 with Thailand and Vietnam. Myanmar and Laos have a lower, Tier 3 ranking. (The tiers reflect a government’s efforts to combat trafficking, not the level of trafficking within a country.)

In October 2019, Minister of Interior and President of the National Committee for Combating Human Trafficking, Sar Kheng, presided over a meeting to disseminate the National Strategic Plan (2019–2023) for combating human trafficking.53 The plan includes recognition of new forms of trafficking including surrogacy and sex trafficking at nightclubs.