The total value of Cambodia’s international trade amounted to $35.8 billion in 2020, a 2.5 percent increase on the $34.9 billion in 2019 even after the Covid-19 pandemic slowed global trade, according to Ministry of Commerce (MoC) reports from 2020. The main sources of Cambodia’s imports in 2020 were ASEAN countries, China and the EU.1 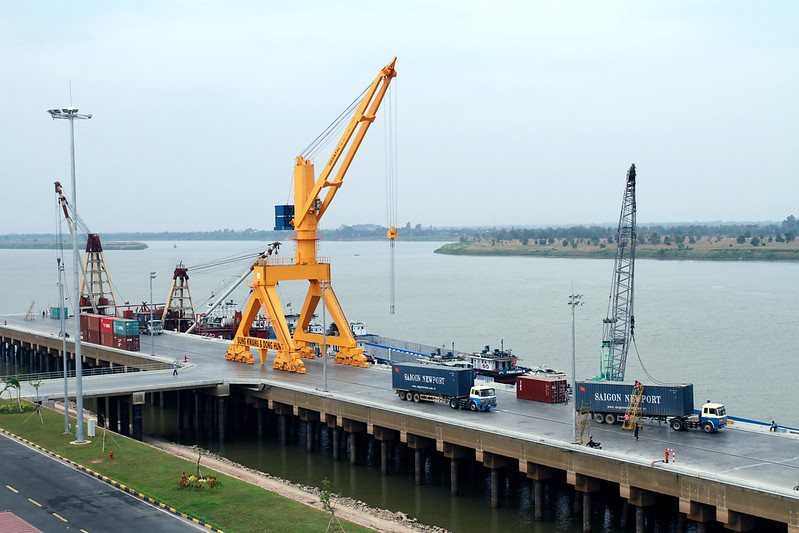 The ideal situation is to have more exports than imports, but due to high domestic demand, Cambodia imports more than it exports, said the Director General of the National Bank of Cambodia, Chea Serey.2  Cambodia’s imports were valued at $18.6 billion in 2020 – a fall of 7.8 percent compared to 2019 – while exports increased 16.7 percent from $14.7 billion in 2019 to $17.2 billion in 2020, according to the MoC report.3

Textile industries play an important role in the growth of Cambodia’s economy. It is easier for Cambodia to produce good quality and cheaper textiles compared to some other countries due to the abundance of cheap labor, natural resources and government support. Cambodia largely imports the raw materials for finished textiles from China and exports the final products to many other countries. Cambodia made 60.5 percent of its total textile imports, worth $3.7 billion, from China in 2019. Further down the list of source countries were Vietnam ($850 million), Hong Kong ($365 million) and Taiwan ($362 million).4  The MoC figures point out that Cambodia imported $5 billion worth of textile raw materials in 2019, which fell by 13.3 percent to $4.4 billion in 2020.5

Prime Minister Hun Sen said during a speech in Pursat province that China would send raw textile materials to Cambodia to relieve the shortage caused by the pandemic. The shipments would continue up to 5 months though it was unclear how much China would be able to provide. As scheduled, the first cargo of raw materials arrived on the 9 March 2020 at Preah Sihanouk Autonomous Port, according to the Chinese Embassy in Cambodia.6

The total value of imports of electrical and electronic equipment dropped from $2.5 billion in 2019 to $2.4 billion in 2020, a decrease of 3.7 percent, based on the 2020 MoC data.7 The main items included in the industry were transmission apparatus for radio, telephone and TV, insulated electrical wire and electrical transformers – the gross imports of these items were $422 million, $216 million and $104 million respectively.8

According to the MoC official Marie Yang, lowering import duties on equipment and spare parts is needed in order to attract more foreign investment because higher tariffs means higher production costs, which could reduce Cambodia’s competitive advantage. The import tariffs on these products are as high as 15 percent, while neighboring countries including Vietnam and Thailand set them at just 3 and 5 percent respectively.9

According to Atlas of Economic Complexity, the top 3 import sources of cars in 2019 were the U.S. ($250 million), Thailand ($160 million) and the United Arab Emirates ($45.7 million).10  The MoC stated in its 2020 reports that the import of cars dropped 36.6 percent from $1.7 billion in 2019 to $1 billion in 2020.11 The decline caused Cambodia’s customs revenue to reduce by about $30.3 million in 2020, according to the Minister of Economy and Finance’s Aun Pornmoniroth. Due to the pandemic, not only consumer spending decreased but also cross-border shipments were more restricted, said the vice-president of the Cambodian Chamber of Commerce, Lim Heng.12

Seng Voeung, General Manager of the Ford Division at RMA (Cambodia), said that the sales of both new and used cars declined by 20,000 units in the first eight months of 2020, and it would continue to decline because of the pandemic. A second-hand car dealer in Phnom Penh said that his sales had declined almost 90 percent since the start of the pandemic. Before, he could sell around 10 cars in a month, but he could only sell 1 or 2 now, and he had lost more than $90,000.13  To increase the imports in the sector and reduce the cost of customs duties, the Minister of Economy and Finance, Aun Pornmoniroth, proposed to the prime minister reducing the import duty from 30 to 10 percent for purely electric family and passenger cars.14