Political stability and economic growth of all sectors have played vital role in building the public and foreign investors’ confidence and maintaining the safety and soundness of banking system in Cambodia. The banking sector continues to have substantial growth as it shares 82.2% in the total assets of Cambodia’s banking system. The total assets of bank growths by 21.5% to KHR 172.1 trillion (USD 42.2 billion) which is the result of customer deposits and borrowing funds.1

Starting in 1999, the Cambodian Government has implemented banking regulations to improve commercial facilities by strengthening the base of financial institutions and ease financing opportunities for investors. The banking sector is governed by a more sophisticated legal regime compared to other financial sector segments. Through the National Bank of Cambodia (NBC), cross border loans are required to be documented in English and are governed by the law that applies in each jurisdiction. Certain Cambodian banks are acquiring cheaper finance from other nations to facilitate domestic lending, hence increasing foreign liabilities. For example, in 2012, net foreign assets declined due to increased foreign liabilities.2 The National Bank of Cambodia plays an active role in managing and facilitating fiscal stability to improve the soundness and effectiveness of the industry, develop interbank facilities and enhance foreign markets. 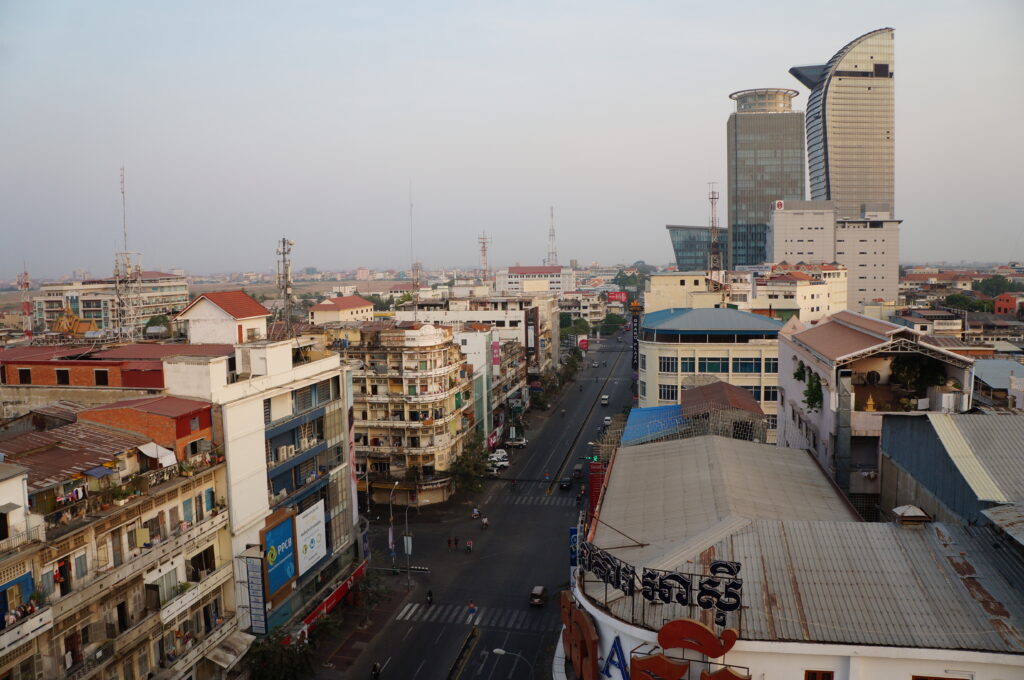 The landscape picture of Canadia and Vattanac bank buildings. Photo by Pierre André, taken on 01 February 2014. Licensed under CC BY-SA 4.0.

This surge in the number of banks resulted in over-banking. The fast proliferation of financial institutions, combined with limited business diversification and an overburdened supervisory capacity, threatens financial stability. The country’s financial stability can also be affected as competition increases. Further banking and financial services policy and regulation are therefore necessary to ensure an optimal balance and sustainability of the Cambodian banking sector as well as to improve its capacity in coping with economic shocks.

Law on banking and financial institutions

The law on banking and financial institutions enacted in 1999 set the minimum reserve capital for banks at approximately $ 12.5 million while NBC maintained a 5% as a guarantee deposit. However, the required minimum capital was modified in 2008, after which local commercial banks with at least one influential shareholder and rated as investment-grade, are required to possess a minimum of $ 12.5 million. However, commercial banks with individuals or companies as shareholders must have a minimum of KHR 150 billion. As for specialized banks rated as investment grade and those having companies or persons as shareholders, the requirements are of $ 2.5 million and $ 7.5 million, respectively. In 2008, the NBC also increased capital reserves up to $ 75 million and $ 15 million for commercial and specialized banks, respectively.3 Capital buffers are also being regulated as a way to ensure the sustainability of the banking and financial institutions in Cambodia.4

In parallel, the Cambodian banking industry is liberalizing interest rates on deposits and loans. It was not until 2017, and after emerging concerns from consumers, that the NBC established an interest ceiling regulation. Until then, every bank was able to set its own interest rates.5 Under regulatory oversight, each financial subsector now has its specific legislation and regulatory framework, with the NBC assuming supervisory and consumer protection responsibilities. Accordingly, institutionalizing interest ceiling regulations led to the establishment of a maximum annual interest rate of 18% for microfinance institutions (MFIs) and microfinance deposit-taking institutions (MDIs).

Another regulation of banking and financial services is impairment regulation, which established a more stringent credit risk management framework and set out new requirements concerning loan classification and calculation.6 Before implementing impairment regulations in late 2017, two different rules applied to specialized banks and microfinancing institutions. The new regulations streamlined and harmonized the classification process of loans in all Cambodia’s financial institutions and provided additional elements for consideration during classification of loans, such as normal and substandard loans. Impairment provisions are also critical to banks when restructuring or refinancing loans by considering circumstances guiding restructuring.7 The NBC issued another circular in February 2018 that sets out specific requirements, such as submitting financial statements, reviewing and classifying facilities, and revising credit policy.

Modification on foreign currency RRR did not impact lending operations of banks due to substantially excess reserves held by lending institutions. RRR on borrowed foreign funds was reduced in 2008, motivating banks and financial institutions to attract capital inflows.10 However, while the RRR on foreign funds was reduced to 12% in 2009, it was then increased to 12.5% in 2012. In 2020, RRR on international and domestic currencies was reduced to 7% following the coronavirus pandemic.11

The steady exchange rate of the riel since 2000 has been instrumental in reducing investors’ exchange rate risk stemming from fluctuating exchange rates. NBC sells US dollars when the riel value is far below the target rate, thereby stabilizing the exchange rate under the managed float regime.13 Besides protecting investors, securing stable exchange rates helps maintain the purchasing power of the domestic currency, supporting local economic expansion.

Related to banking and financial services policy and regulation: