Access to energy is crucial for achieving almost all of the Sustainable Development Goals, from the eradication of poverty through advancements in health, education, water supply and industrialization to combating climate change.2

Energy has been described as core to achieving the 2030 Agenda. Despite this, based on current trends there will still be 2.3 billion people globally who will not have access to clean efficient cooking technologies that protect their environment and health. This problem must be urgently addresses to meet the targets of SDG 7 and the other SDGs, particularly those linked to mitigating climate change (such as SDG 13).

The proposed global approach is to use public funding to strongly encourage investment in renewable energy and energy efficient technologies. In particular, local capacity building to support private sector investment in decentralised energy infrastructure is seen as a key approach to enabling equitable access to energy. The High-Level Political Forum review of SDG 7 has emphasised the importance of regional cooperation to this end.3

Transition from the MDG targets to SDG 7 in Cambodia

The earlier Millenium Development Goals (MDGs) did not have a specific focus on equitable access to energy. Target 7.A referred broadly to introducing sustainable development principles into national policies and reversing losses of environmental resources. Target 7.B focused on reducing biodiversity losses, partially through an indicator to reduce CO2 emissions.4 When this was localised in the Cambodian MDGs, it was adapted to target a reduction of the percentage of households dependent on fuel wood to 52% by 2015.5

This was the only energy indicator for the MDGs and in the 2015 Cambodia Socio-Economic Survey (CSES), it was shown that 82% of Cambodians were still reliant on either firewood (73.9%) or charcoal (8.1%) as the primary source of cooking fuel.6 The 2016 National Biodiversity Strategy and Action Plan, which is aligned with the SDGs, notes that fuel wood accounts for approximately 70% of the total national energy demand and is a driver of heavy forest logging, resulting in both indoor and outdoor air pollution as well as other environmental problems.7

When the localised SDG indicators are released later in 2018 it is likely that Cambodia will use indicators focused more on active strategies to produce results. SDG 7 global indicators include:

A need for greater emphasis on sustainable, renewable energy in the overall national energy mix has also been identified.10 While some households in Cambodia are able to connect to a reliable, centralised electricity supply, this is not the case in all areas of the country. While biofuels, natural gas and other fuels are used for cooking and other household activities, these sources are often not able to sustainably provide a stable energy supply.

To address growing demand, conventional electricity production has been adopted, mostly through large-scale hydropower and coal-fired electricity plants.11 The development of coal-fired generation has had the effect of fairly significantly reducing the percentage of energy consumption being accessed from renewable sources.

Localization of SDG 7 in Cambodia

The Ministry of Mines and Energy (MOME) is primarily responsible for implementing SDG 7 in Cambodia. In 2016, a rapid integrated assessment found that SDG 7 was already aligned with Cambodia’s national policies.12 These include the National Strategic Development Plan (2014–2018), which continues the implementation of the the Energy Sector Development Plan (2005–2024), as well as the Rural Electrification Master Plan (REMP) 2003 and the Renewable Energy Action Plan (REAP) 2003.13

Means of implementation for SDG 7 in Cambodia

There are two ‘means of development’ indicators for SDG7 that will support Cambodia as a least developed country to access the resources and technology that the country requires to meet the targets. They involve:

Currently, much of the electrification programme in Cambodia is large-scale and centrally coordinated and planned by the state-owned enterprise Electricité du Cambodge (EDC) at a cost that is not affordable in all areas of Cambodia. To achieve the SDG7 targets, it will be important to attract investment in infrastructure and appropriate technology for rural electricity enterprises such as sub-transmission networks, isolated mini-grids and off-grid systems. 18 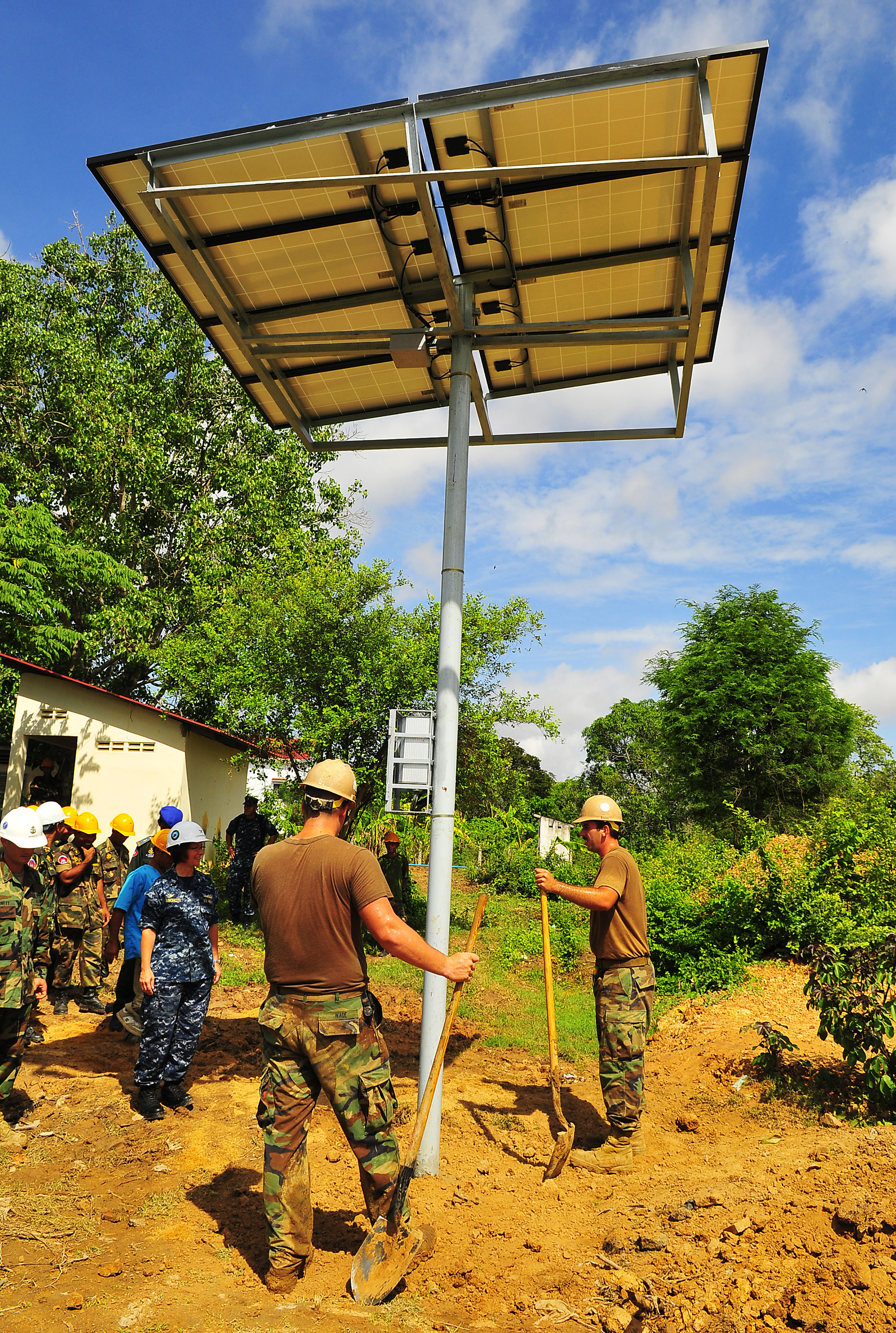 The risk of these investments will need to managed with a range of financing mechanisms that encourage private sector investment, while still developing the capacity of the EDC to access all citizens in Cambodia. This will involve a scale of investment that meets rural electrification targets of approximately 100,000 rural households annually by 2030, or 2.1 million rural households in total during the implementation of the SDGs.19

Investments into technological development of options such as solar and small-scale and micro-hydro energy generation will likely need to be leveraged by increased levels of public funding and cooperation with international mechanisms such as the ASEAN Centre for Energy, the International Energy Agency (IEA), and the UN Green Climate Fund.20

The major focus of the the SDG targets in Cambodia is the expansion of rural electrification plans and the accessibility of the electricity grid. This will form the core of the monitoring and evaluation process for SDG 7 in Cambodia.21

Over the period to 2030, timely collection and analysis of data will be useful for enabling smart investments to be made to promote investments that transform how rural people access energy. Progress must increase the equitability of how energy is both produced and distributed. In particular, the data collected for SDG 7 will be vital for developing more integrated targets to better assess the impacts of policies promoting large scale hydropower such as the upstream and downstream social impacts.22