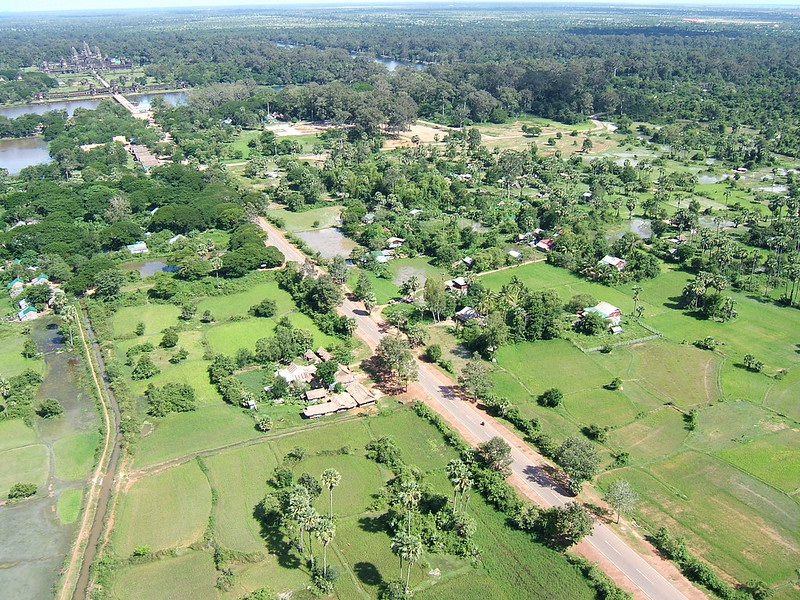 A view of the lush green surrounding countryside around the mighty Angkor Wat. Photo by shankar s., taken in October 2008. Licensed under CC BY 2.0.

Private land is property that is legally owned or possessed either individually or jointly by persons or a company.1 Guaranteed and protected under the 1993 Constitution and the 2001 Land Law, NGOs and the media report that private property owners in Cambodia continue to face land tenure insecurity in the form of forced evictions, forced sales, and land conflicts with private entities.2

State public land comprises all lands that have a public interest value. This includes: land of natural origin (e.g. rivers, lakes and mountains), properties specially developed for public use (e.g. ports, railways and airports), property that is made available for public use (e.g roads, pathways and public parks), property allocated to provide a public service (e.g. schools, hospitals and administrative buildings), protected areas, archaeological and historical sites, and official property of the Royal Family.3

State private land is all property that belongs to the state but does not have any public interest value (i.e. does not come under any of the categories listed above).4 It can be sold or leased, including long-term lease and land concessions, but any such transfer must follow legal procedure. 5 The distinction between state public land and state private land is important as it affects how the land may be used and managed.

State public land cannot be sold or transferred and cannot be granted as economic or social land concessions. Even so, NGOs report that large tracts of state public land, including in protected areas, have been reclassified as state private land and granted to private entities as land concessions.6 Any occupation of state public property can be punished by a fine or jail sentence.7 However, state public land can be subject to leased up to 15 years, provided the leassees’ activities do not fundamentally alter the nature of the land or leave it in a condition such that its public interest value is lost.8 State private property may be sold, exchanged, transferred and leased – including long-term lease and land concessions.9 If state public property loses its public interest value it may be re-classified as state private property, after which it may be subject to lease, concession, exchange or sale.10

Under the 2001 Land Law, there are two types of communal or collective property: monastery property and indigenous community property. Monastery property constitutes the land and structures within Buddhist monasteries belonging to the Buddhist religion.13 It cannot be sold, exchanged or donated, nor can it be legally possessed by another. However, the land may be rented or sharecropped provided the income is used strictly for religious purposes.14