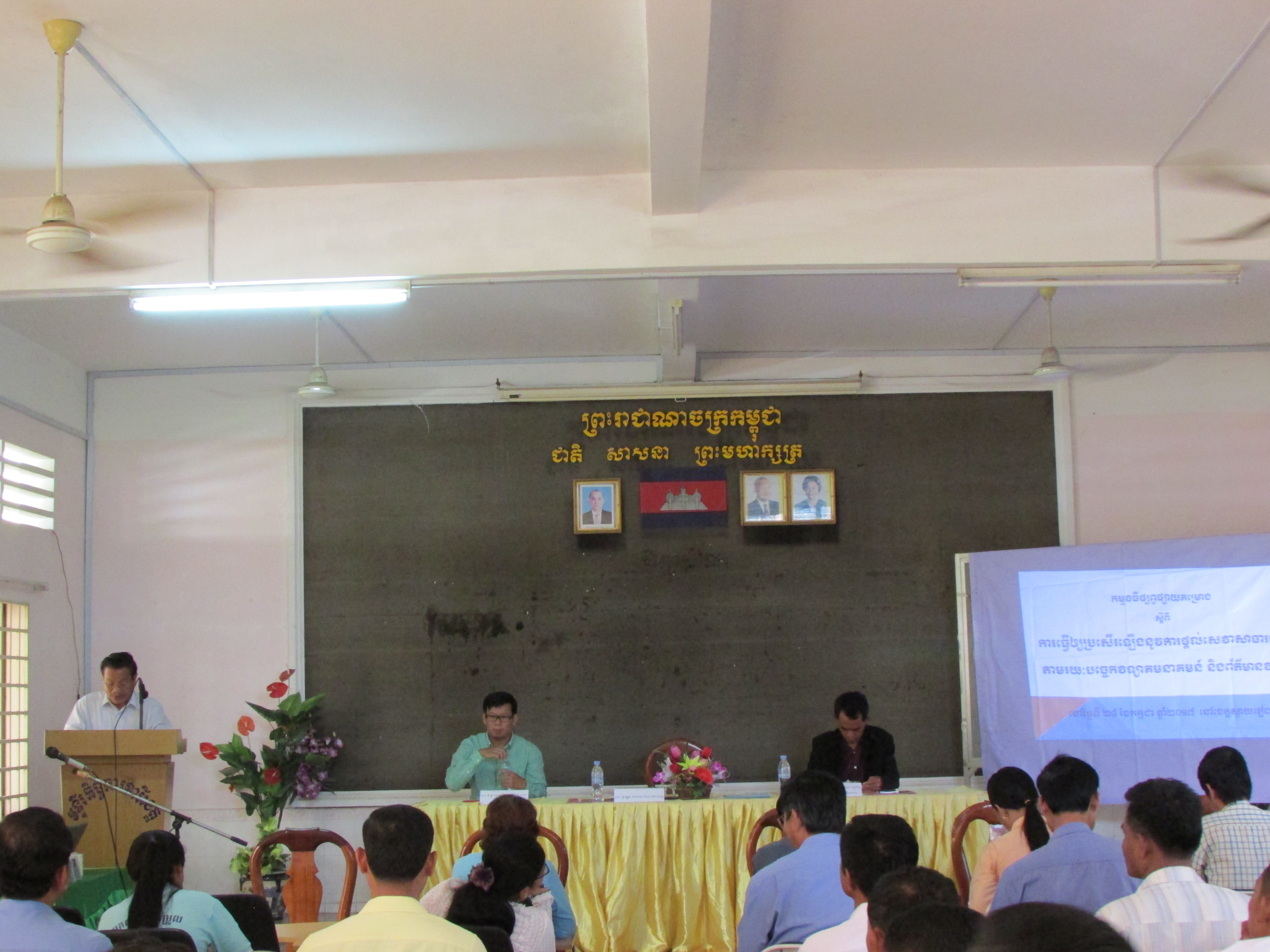 The launch event of a project improving the delivery of public services through ICT in Svay Rieng province, Cambodia. Photo by the ODC team, taken on 28 June 2017. Licensed under a CC BY-SA 4.0.

Civil society, representing the interests of ordinary citizens, is the part of society not involved in government or business. Civil society organisations in Cambodia include non-governmental organizations (NGOs), Buddhist institutions, trade unions and media associations.

There are many of these organisations. In June 2016, Cambodia’s permanent representative to the United Nations in Geneva, Ney Samol, was reported as saying that there are 4,637 NGOs in Cambodia.1

In the 1991 Paris Peace Agreements, United Nations and the 18 country signatories bound themselves “to promote and encourage respect for and observance of human rights and fundamental freedoms in Cambodia as embodied in the relevant international instruments in order, in particular, to prevent the recurrence of human rights abuses.”2

Since that time, a number of important freedoms and rights have been set out in the Cambodian Constitution and in various laws.

International and local NGOs have played a large role in Cambodia’s reconstruction and development since their reemergence in the country in 1989, particularly in areas such as health, education and environmental protection. On paper, there are a number of mechanisms where NGOs can have a voice in development issues. There is a widespread view, however, that in reality groups representing civil society have an extremely limited input into government policy and direction.3

Some laws in recent years have imposed new restrictions on community organisations. A number of activists have been killed without anyone being convicted for the crime and other activists have been imprisoned or threatened with imprisonment. This has drawn widespread international condemnation.

The legal system and many individual laws deal with civil society groups. The Civil Code, adopted in 2007, recognizes registered NGOs as legal entities and makes them subject to its provisions.

According to the 1997 Tax Law (Article 9), NGOs do not pay taxes on their income if they are organizations with religious, charitable, scientific, literary, or educational purposes.

Some specific areas of rights and freedoms are covered by separate laws. As a general rule, the right to freedom of assembly is governed by the Law on Peaceful Demonstrations, which was promulgated in late 2009.

The Law on Associations and NGOs

One of the key laws overseeing the civil society sector is the Law on Associations and Non-governmental Organisations (LANGO), which became law in 2015.5 The law is the responsibility of the Ministry of Interior. Domestic associations or non-governmental organisations must register with the Ministry of Interior. Those that are not registered cannot conduct any activities in Cambodia.

Any foreign association or non-governmental organization wishing to conduct activities in Cambodia must register with the Ministry of Foreign Affairs and International Cooperation by signing a Memorandum of Understanding.

If one of these bodies wants to implement a short-term project, it must gain the approval of the Ministry directly or through a local partner.

Associations and NGOs must remain politically neutral with regard to Cambodia’s political parties. They can be removed from the register if they conduct activities “that that endanger the security, stability and public order, or jeopardize the national security, culture, tradition, and custom of Cambodian national society…”6

Restrictions on political activity are also found in the Law on Election of Members of National Assembly (LEMNA), passed in March 2015. This has provisions that ban civil society organisations from engaging in the electoral process, including pre and post-election campaigns.

In October 2017, the Ministry of Interior released new instructions around activities​ carried​ out​ by​ associations​ and​ local​ non-government organizations. These require that  “Associations​ and​ NGOs​ wishing​ to​ conduct​ activities​ in​ the​ territory​ of​ a​ specific​ city​ or​ province​ have​ to​ inform​ the​ Ministry​ of​ Interior​ about​ the​ nature​ of​ activity​ or​ directly​ inform​ the​ administration​ within​ three​ days​ before​ the​ activity​ starts”.7 The Ministry has also instructed provincial​ administration​s and​ relevant​ authorities to​ take​ immediate​ action​ to​ shut down​ any​ local​ associations​ and​ non-governmental​ organizations​ who​ act​ without​ being​ legally​ registered​ at​ the​ Ministry.​ The same action applies to​ local​ associations​ and​ NGOs​ that​ have​ been​​ deleted from​ the​ Ministry​ list yet remain​ active​.8

In April 2016 a Trade Union Law was passed that set out the rights of people to set up and join unions. It also gives the Ministry of Labor a number of controls over trade unions, including the right to audit a union’s finances and scrutinize the international support it receives. The law was criticized by unions but supported by the Garment Manufacturers’ Association of Cambodia (GMAC). GMAC said that in 2015 there were 557 garment and textile exporting factories, and 58 footwear factories, but 3,166 unions.9

Article 13 of the law says that a union must collect support from at least 50 percent plus 1 of its members to achieve a meeting quorum to decide on whether or not to strike. Some unions may find it difficult in practice to achieve this.

Under Article 15, the Ministry of Labor has discretion to issue directives (prakas) that allow the ministry to decide whether or not to authorize a union registration request.10

The growth and development of civil society in Cambodia has received support from many sources, particularly from international donors.

The safety of civil society activists has been threated many times and a number of activists have been killed in recent years. In July 2016, political commentator Kem Ley was shot and killed in Phnom Penh. Seventy NGOs put their names to a document condemning the killing and asking that analysts be able to continue their work “without fear of violence and intimidation.”13

A number of civil society human rights activists were sent to prison on various charges in 2015 and 2016. Seven representatives of civil society groups were brought in for questioning at the offices of the Anti-Corruption Unit.

In May 2016, four United Nations rapporteurs called on the Cambodian government to stop targeting civil society: “The escalation of criminal charges, questioning, court proceedings and public statements against them must cease. We urge the Cambodian authorities to ensure a safe and enabling environment for human rights defenders and civil society, which play a critical role in holding the Government to account and bringing benefits of human rights to the whole of Cambodian society.”14

Under the Cambodian constitution, Buddhism is the state religion. Buddhist monks play a key role in festivals and in ceremonies such as weddings and funerals and passing on cultural beliefs. In wider civil society, Buddhist organisations played a role in developing Khmer national identify in the 20th century, including the movement to Cambodia’s independence. In the 21st century some monks (predominantly younger monks) have participated in protests, while many senior clergy are seen as being more loyal to the government.