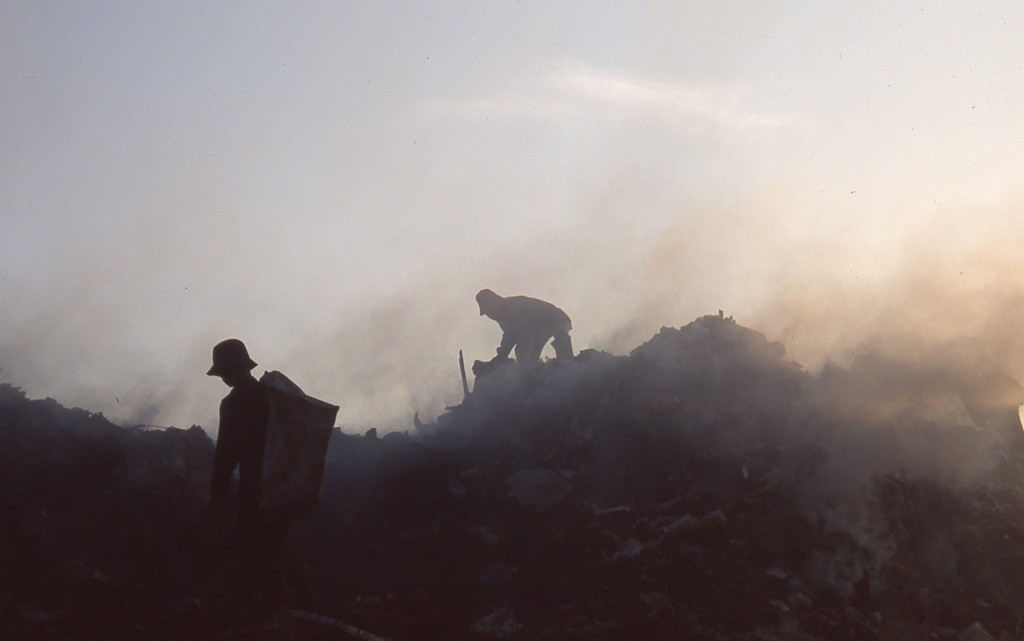 The smoke and stench blow into the air in Phnom Penh’s huge landfill. Photo by Alan Morgan, taken on 17 September 2011. Licensed under CC BY-NC-ND 2.0

Air pollution originates mainly from the burning of fuels such as petroleum, diesel and coal in the transport, household, industrial and energy sectors. Burning these fuels releases air pollutants into the atmosphere which significantly affect air quality and human health.

Even though Cambodia is not a heavily industrialized country, it ranked 164th out of 180 countries in the Environmental Performance Index (EPI) for air quality in 2018.1 The EPI’s air quality measurement, developed by Yale University (Yale Center for Environmental Law and Policy) and Columbia University (Center for International Earth Science Information Network) in collaboration with the World Economic Forum, includes three indicators:

PM2.5 refers to particles in the air with a diameter of less than 2.5 micrometers, or around 3% the diameter of a hair. These particles are dangerous because they are linked to early death from heart and lung disease and they can make asthma, bronchitis and other respiratory problems worse.

The World Health Organisation has set an air quality guideline for annual average PM2.5 concentrations at 10 μg/m3. Cambodia’s level of air pollution is well above this level, standing at 26 μg/m3 in 2016.3 Cambodia’s figure is much better than the global average, however, which stands at 51 μg/m3.4

Ministry of Environment is the main authority that monitors air quality and tackles pollution issues in Cambodia. Issued in 2000, the Sub-Decree on the Control of Air Pollution and Noise Disturbance sets out the ambient air quality standard specifically.5 By law, sources of air pollution are divided into a movable source (without permanent location, eg. vehicles) and an immovable source (with a permanent location, eg. factories).6

The transportation sector has a serious effect on air quality due to the increasing number of vehicles and fuel consumption. In 2016 there were more than 3.2 million vehicles registered, including 2.7 million motorbikes, a 14% increase on the previous year.7 More transportation means more fuel burned and pollutants released.

The hundreds of tuk-tuks and buses continually operating around the Angkor Wat area significantly threaten the air quality there. In 2014, the Global Post reported that the air pollution in Angkor Wat, a UNESCO World Heritage Site, was a significant problem. The ruins were at risk from damage from acid rain. The item mentioned that a decade earlier, air pollution in Siem Reap was worse than Thailand’s Bangkok, a capital city of more than 8 million people.8

The Phnom Penh Post reported in 2014 that Siem Reap’s transport network was going to go green with 50 solar-powered buses set to roll out. The new buses would cost $23,000 each.9 This new initiative is expected to tackle air pollution and acid rain problems. By mid 2015 the buses had not been tested, however.10