Cambodian Independent Teachers’ Association and Free Trade Union of Workers of the Kingdom of Cambodia celebrated the World Teacher Day from Cambodia. Photo by Education International, taken on 5 October 2009. Licensed under CC BY-NC 2.0

Cambodia’s national budget determines state expenditures and revenues. It is the most important policy tool for the government to address the needs of people. Under the guidance of the prime minister, the Ministry of Economy and Finance (MEF) is responsible for budget preparation around the government’s plans and strategies, such as the National Strategic Development Plan (NSDP), in the pursuit of economic growth, social development and poverty reduction.

By law, parliament does not have any responsibility in budget planning but it plays a vital role in the discussion and approval of the draft budget law. According to the 1993 Law on Financial System, the government needs to submit the draft budget to the National Assembly and Senate for discussion and approval. The National Assembly checks, analyzes and debates the proposed budget before adopting it. The adopted budget law is then sent to the Senate. Finally, the King promulgates it into law.1

Preparation of the draft budget law involves the following processes2: 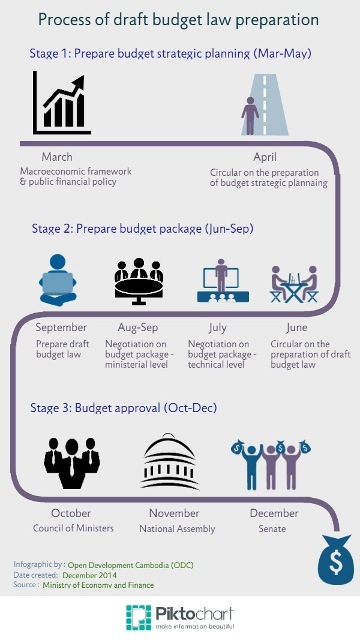 In October 2019, Cambodian cabinet ministers approved a draft budget for 2020 of US$7.58 billion.3 The planned budget represents approximately 26 percent of GDP.

The budget deficit (where expenditure is higher than income) has declined significantly in recent years as a result of a strong move to effective tax collection. The overall budget deficit in 2018 was estimated to be around 1 percent of GDP. Government revenues grew at 16.4 percent in 2018 while total expenditure grew by 13.7 percent.9

In its survey in 2015, International Budget Partnership ranked Cambodia’s budget transparency nearly at the bottom of the 102 countries examined.  Civil society and public involvement in the budget process is limited. The International Budget Partnership’s survey found that Cambodia’s budget transparency was low, scoring 15 out of a possible 100 points in 2013.10

In its 2017 survey Cambodia scored 20 out of 100 – still a comparatively low score, but an improvement over earlier years. In terms of allowing public participation, Cambodia scores lower than Vietnam or Thailand, but above Myanmar. It found that the legislature provides only limited oversight, but it found that the supreme audit institution provides adequate oversight – better than the limited oversight it found in 2015.11