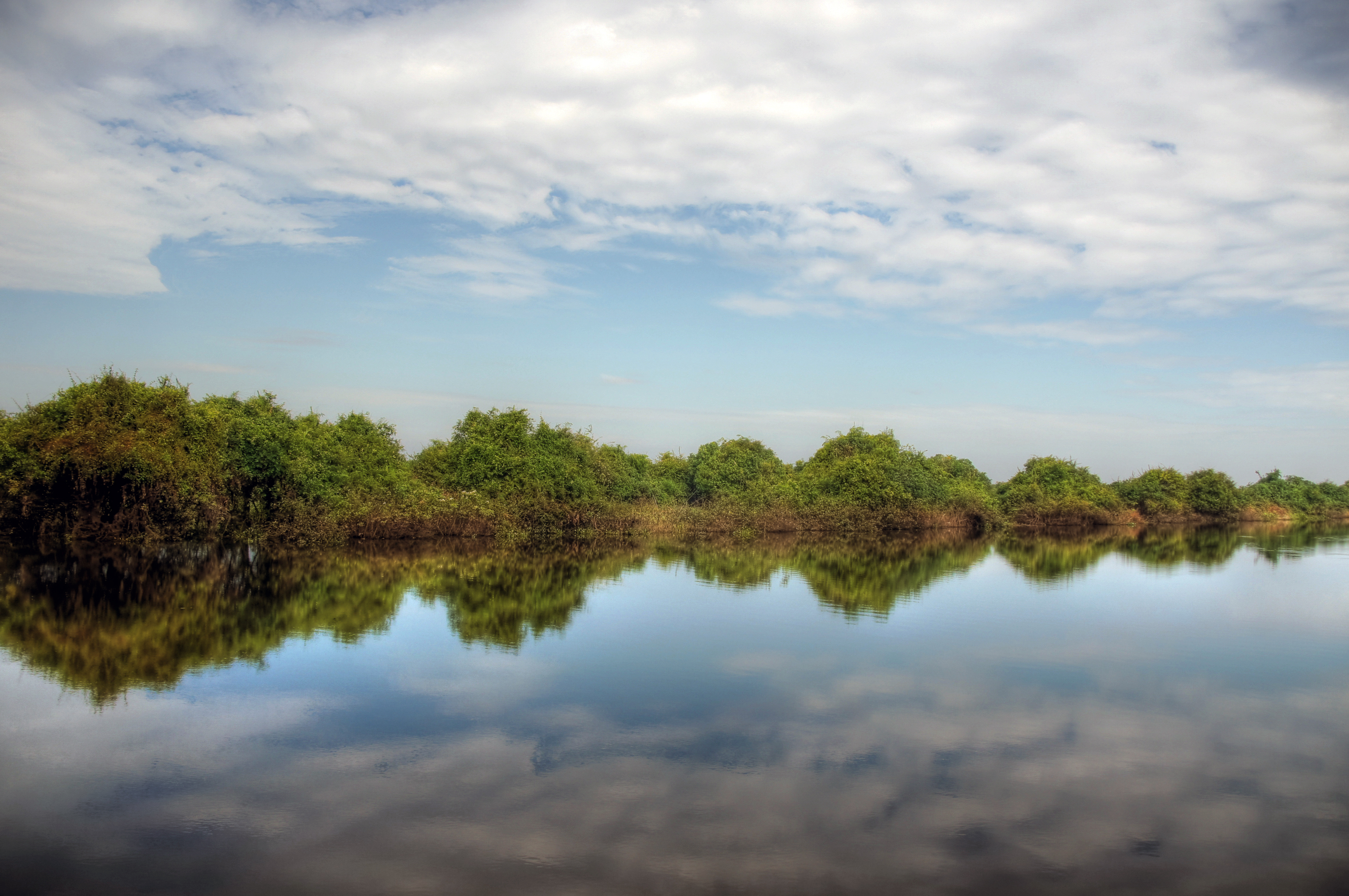 Despite severe droughts striking the country frequently, Cambodia possesses substantial water resources, mostly contained in the Mekong River and the Tonle Sap great lake and river. The lake and rivers in Cambodia are of major economic and ecological importance.

Ecosystem and biodiversity of lakes and rivers

The Mekong River is one of the longest and best-known rivers of the world, and it plays an essential role in the Cambodian economy and the livelihoods of many people1. The river has its source in the Tibetan plateau at a height of over 4,500 meters above sea level, then crosses six countries from China to Vietnam, where it flows into the South China Sea. It has a total course of 4,800km and a catchment area of 795,000km2. Many tributaries supplement the flow, although, when entering Cambodia, the Mekong is already at 95% of its total capacity. It shows 3 noticeable hydrological ‘turning points’:

Four preks (small rivers) discharge into the Mekong: Prek Preah, Prek Krieng, Prek Kampi, Prek Te. They all form the ‘4P’ Area, situated on the east of the Mekong bank, through Kratie and Mondulkiri provinces. The region’s inhabitants are mostly subsistence farmers depending on non-timber forest products and fisheries2. This part of the Mekong is also a habitat for some rare species such as Irrawaddy dophins near Kratie.

Approaching the South China Sea in Vietnam, the influence of tides and the effects of saltwater intrusion modify the water flow and the irrigation potential of the river.

Over its whole length the Mekong River produces 2.6 million tons of fish annually, valued at some US$2.5 billion (2012)3. In Cambodia in 2015, 487,905 tons of fish were taken from freshwater, over four times the amount taken from salt water4.  Cambodia is a distinctive country regarding fishery capture, since most of its resource comes from inland rather than marine areas.

Tonle Sap, also known as the Great Lake, is a remarkable ecosystem. The river flowing out of (and into) it is unique in the world in having a reversible flow depending on season. In the wet season, monsoon rains increases the volume of water to the point that it pushes northward, increasing the size of the lake by almost ten times5. Soon after the height of the rainy season, the flow reverses back to normal and water goes back supplying the Mekong’s stream. This mechanism is unique and fragile, and is threatened by infrastructure, urbanization, demography and climate change.

Following a Royal Decree of 2001, the law on Protected Areas (2008) took a step to protect the lake, by creating a special protected area called Biosphere Reserve6.

The Tonle Sap has many tributaries7, and is  the Mekong’s biggest natural reservoir. Its depth grows from 2 meters during the dry season to 10 meters (and covering around 12,000 square kilometers) at the height of its capacity. The lake supports diverse ecosystems, as well as depositing silt that is useful for farm fertlilty8. It is supplied mostly by the Mekong flow regime during monsoon season:

Organization and management of the water sources

The Mekong River’s management brings many challenges, for it involves Cambodian sovereignty and transborder issues. In order to facilitate ongoing  discussions between the neighbouring Mekong countries, the Mekong River Commission was established on 9 April 199510. Its primary goals are to ensure optimum use and protection of water, as well as ensuring an acceptable minimum natural flow during each month of the dry season.  Among the key elements of the agreement are the prevention of harmful effects11, and state responsibility for damages12. Commitment to these is written into the Cambodian law on water resources13.

Though promising, the MRC has shown flaws, especially regarding its capacity to make the countries match their commitments on avoiding building harmful projects on the river. 11 dam projects have been proposed along the Mekong, in addition to the several Chinese infrastructure projects, which, if implemented, would threaten hundreds of fish species according to environmental groups14. In addition to the limitation of water flow, dams reduce the sediment and nutrients carried along that are important for aquatic ecosystems.

In 2010, the Mekong River Commission published a Strategic Environmental Assessment15, which concluded that the 11 dams will turn half of the water flow into stagnant reservoirs, block the migration of many fish species and change their natural habitats. It estimated 26 to 42% of species would be affected, with many of them threatened with extinction. The same report forecast a threat for food security for around 2 million people if the projects are implemented.

In 2012, Laos ignored the consultation process in building the Xayaburi dam, claiming its sovereign right to do so16. With work on the Xayaburi and Don Sahong dams underway, Laos announced plans for a third mainstream dam in November 2016. The country submitted plans to the Mekong River Commission for Pak Beng, a proposed 912 megawatt dam.17

Cambodia is also conducting feasibility studies on Mekong dam projects, although it is, with Vietnam, the potential victim of a lower water flow. Studies indicate that the potential gain in electricity supply is not going to compensate for the loss in agriculture and fisheries.

They key government ministry responsible for this area is the Ministry of Water Resources and Meteorology. It oversees water resource sustainability and availability for local and national development.

The management, development and protection of the Tonle Sap Lake region is the responsibility of The Tonle Sap Authority (TSA). This body was formed in 2009. The TSA oversees natural resource management that includes issues around hydrology and water quality, flooding, agriculture, and fisheries, and the livelihoods of people in floating villages.

The Mekong and Tonle Sap are not the only water sources where dams are of concern for Cambodia. For example, the Yali hydropower built in 1993 on the Sesan River in Vietnam greatly affects indigenous people in Ratanakiri province18, in terms of livelihood, food availability, impact of the flood and even property destruction. Overall, community livelihood is threatened and the calculation cost/benefit is sometime overestimated in favor of big infrastructure projects.

Change around the rivers potentially threatens the local communities living around or on floating villages. Villagers lack the basic human right to clean water and sanitation. Traditionally, rice is planted in areas close to lakes, with some varieties called “floating rice”. The rice field ecosystem is of major importance for rice production. Intensification of rice production could threaten the balance of such ecosystems, and in the end, harm people’s livelihood.

Social problems have also been reported. Vietnamese communities living on floating villages have no legal rights to own land, although some have lived in Cambodia for generations. Based on the fear in Cambodia of territory grabbing by foreigners19, those communities are not well accepted and are live under constant threat of eviction.

One of Cambodia’s issues remains the lack of transparency and accountability especially toward its natural resources extraction. In addition, several ministries have a mandate to handle water-related issues, with limited cooperation and no comprehensive plan.

While policymakers aim for modern development with large-scale infrastructure, Cambodian rural society relies mostly on traditional agriculture and small farms. Local communities are threatened by large-scale projects. Around the Tonle Sap, lots of flooded forests have been converted into agricultural land, which leads to a loss of livelihood sources for a number of people. It has been observed that overall impacts are not taken into account at upper-level policy making20.

According to a recent study21, the Tonle Sap is mostly vulnerable of the Mekong’s changes, especially dam construction, and climate change, which may impact the Lake’s flood mechanism. Infrastructure development is the main change driver, and leads to four potential scenarios for Tonle Sap’s future around the year 2040: