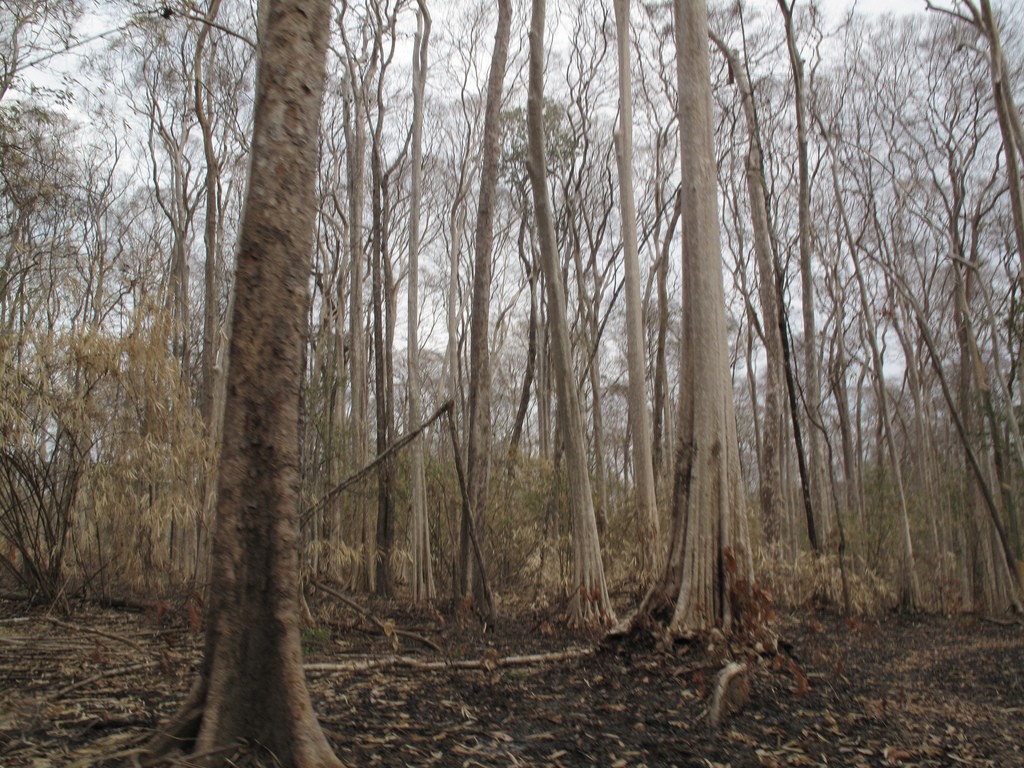 Forest in Cambodia. Photo the International Institute for Environment and Development, taken on 12 April 2010. Licensed under CC BY-NC 2.0.

Forest cover is the area of land covered by tree canopy. Measuring and reporting this can show the different types of forest that exist and the areas of each, and how these areas change over time. In Cambodia, forest cover reporting has quantified the scale of deforestation that has taken place in the last four decades.

Several organisations have reported on forest cover relating to or including Cambodia, including ODC, University of Maryland researchers, and others.

In 2006, Cambodia’s Department of Forestry Administration (FA) published a map showing Cambodia’s forest cover in 2002. Then in 2011, the Forestry Administration, supported by the International Tropical Timber Organization and the Government of Denmark, published Cambodia Forest Cover, which included maps of forest cover change between 2006–2010, and between 2002–2010.1

No official maps or analysis specific to Cambodia were published in the years following, so ODC decided to create a set of updated forest cover maps. The forest cover map for each year was made from 16 to 19 satellite images, obtained from the United States Geological Survey (USGS). ODC selected satellite images for analysis from 1973, 1989, 2000, 2004, 2009, and 2014 based on their quality, particularly those absence of cloud cover.

The maps before 2014 included plantations in the mixed or dense forest classifications, due to the difficulty in differentiating plantation crops from forest at the available image resolution. As part of their preparation for the 2014 analysis, mappers used high-resolution images to confirm the presence of the uniform stands of a crop or timber plantation. This was applied in areas more likely to contain plantations (such as those identified by the government as economic land concessions). This has resulted in a more accurate representation of dense forest for 2014.

Researchers at the University of Maryland mapped global tree cover extent, loss, and gain for the period from 2000–2012.2 The results were based on analysis of Landsat images.

Interactive versions of the maps with a considerable amount of functionality are available to the public. Maps based on the University of Maryland work are available at the Global Forest Watch website.3

WWF has maps showing forest shower in tropical areas in 2000 and estimated forest cover by 2100 if deforestation continues at the current rate.4

The American-based environmental protection group Forest Trends also reported on Cambodian forest cover in a 2015 report.5 They found that land concessions for large-scale agricultural plantations, mostly given to companies from Cambodia, China and Vietnam, were responsible stripping off Cambodia’s forest cover.

According to the report, the Cambodian government granted a total of 272 land concessions by the end of 2013. Over 80% lie within forests, and a quarter within the boundaries of protected areas.

The risks around reporting

Covering these issues can be extremely dangerous. In November 2015 the international NGO Reporters Without Borders issued a report Hostile Climate for Environmental Journalists. The report named Cambodia and India as the “deadliest” countries for environmental reporting, pointing out that four environmental reporters were killed in Cambodia from 2012 to 2014.6 Three of the reporters were covering deforestation/illegal logging.