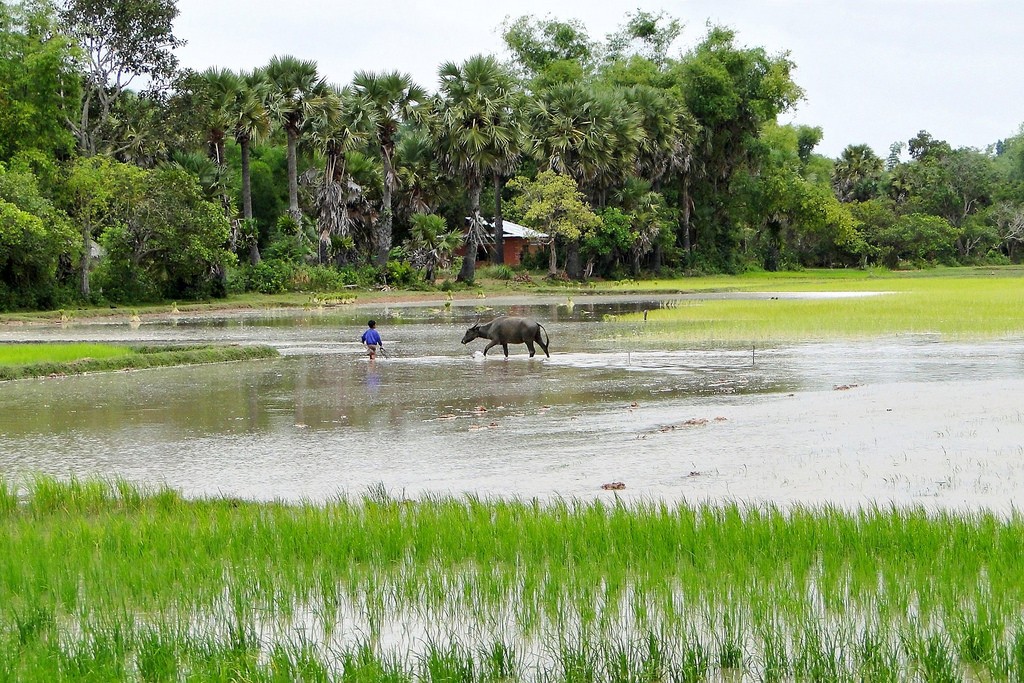 Agricultural gross production grew by 8.7 percent between 2004 and 2012, driven by crop production, mainly of paddy rice (annual growth of 9 percent), maize (20 percent), cassava (51 percent), sugarcane (22 percent), and vegetables (10 percent). The growth has been slowed remarkably since then. 2

The average growth of yields across crops between 2004–2012 was estimated at 4 percent, as a result of adoption of improved technologies, more irrigation system and better access to mechanized services. 3 It has a long way to go, however. The Asian Development Bank study Improving Rice Production and Commercialization in Cambodia found that Cambodia’s average rice yield is low compared to its neighbors—little more than half the yield that Vietnam achieves, for example.4

There are very different sizes of enterprise, from industrial down to smallholdings. In the last decade, larger farms (more than 3 ha) have tended to become larger and small farms (less than 1 ha) to become smaller.5

The economic land concessions (ELC) programme that began in the 1990s gave long-term leases to companies to clear land for industrial agriculture: large-scale plantations and factories to process agricultural products. The Ministry of Agriculture, Forests and Fisheries website states that between 1996 and June 2012, the Ministry signed ELC contracts covering 1,204,750 hectares.6 However, data from NGO Licadho (which excludes land allocated for mining exploration) suggests that 2.14 million hectares have been leased.7

Much of the increased production of products such as rubber and cassava is the result of industrial agriculture, which has been a key focus of the government’s agricultural development strategy.8

But the massive ELC program has not added significant value. As a 2015 World Bank report found, “Except for rice, the agroprocessing industry has played a limited role in agricultural growth. Almost all crops were exported to neighboring countries unprocessed.”9

While some small farms have seen productivity improvements in past years, the productivity of most smallholdings has remained low, as agricultural extension and other services have often not reached them.11 An Asian Development Bank study on rice production found that the size of the area cultivated by farm was the most important determinant of improved production and commercialization, noting that increasing the area of cultivated land can be achieved through either land acquisition, or increasing the number of annual harvests.12

According to the 2013 agricultural census, the households with agricultural holdings housed 28 million chickens, 5 million ducks, 2.7 million cattle, 1.4 million pigs, 472,000 buffalo and a few thousand goats. 13Livestock holdings are typically very small, between 10 and 100 pigs, for example.14

It is an area of farming with some significant constraints—e.g. small average stock holdings, regulatory gaps, disease—and the growth in livestock has been modest.15 In fact, the importance of livestock production in agricultural value added (the value of gross production less the value of intermediate farm inputs) declined from 17 percent in 2002 to 14 percent in 2012. 16

Disease is a constraint to cattle production. There have been a number of large outbreaks of bovine foot and mouth disease in Cambodia since 2000, including 2005 and 2013.18

The Cambodian Organic Agricultural Association represents and supports organic farmers in Cambodia. Together with the Cambodian Center for Study and Development in Agriculture (CEDAC), they certify products as organic or chemical-free. Given the small scale of the industry, international certification is too expensive, but there is a push towards certification within the Southeast Asia region. There is already an existing standard, the Asia Regional Organic Standard. German development agency, GIZ, has supported the development of organic farming in Cambodia.

Unlike developed countries, organic fruit and vegetables do not always command significantly higher market prices in Cambodia. There is a good argument, however, that they should: technical advisers to the industry say some of the most toxic pesticides, banned by the World Health Organisation, are still available in Cambodia, with little government enforcement or regulation of their use. 19Challenges in greater adoption of organic farming include the fact that it requires new skills and knowledge, and that the products may grow at a slower pace than those that are treated with chemicals.20