Jatropha, known in Cambodia as “Lhong Kwong”, is commonly grown in the Kingdom. Jatropha mainly grows in the mountainous regions of the north and central parts of Cambodia but is not restricted to those areas. It can be found in Battambong, Pursat, Kampong Speu, Sihanouk, Kandal, Prey Veng, Kampot, Kep, Siem Reap, and Kampong Cham Provinces.1 2 Cambodia has approximately 1,000 ha of jatropha.3 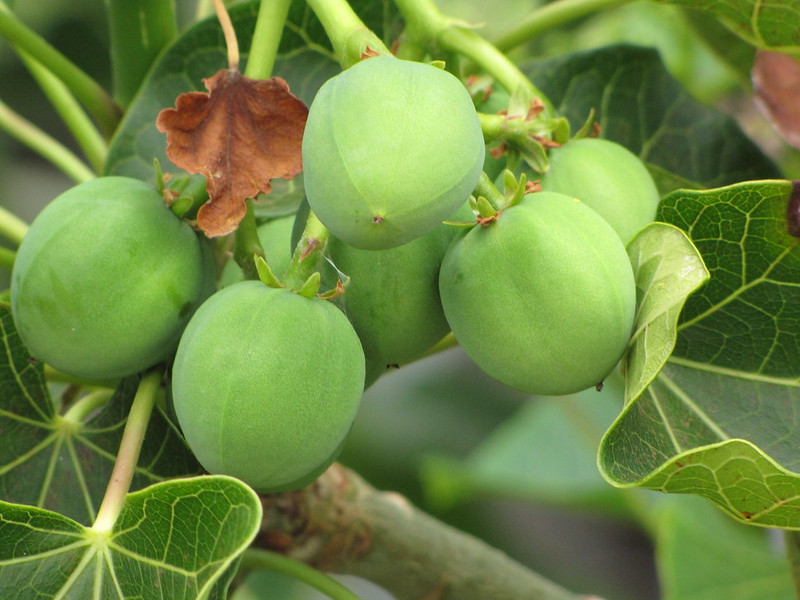 Jatropha is a drought-resistant plant that grows in marginal soils and lives for up to 50 years. It can be grown in low rainfall areas of around 300–1,500 mm per year. Cambodia’s average annual rainfall is 1,000–1,500 mm.4 The plant can be propagated in nurseries and grows very fast from seeds or cuttings.5

When the fruit capsule changes from green to yellow in 2–4 months, the seeds become mature. The oil yield is 25–40% of oil by weight. The seeds contain several chemical components including saccharose, raffinose, stachyose, glucose, fructose, galactose, and protein.6

Jatropha flowers twice a year in Cambodia, April-May and October-November, while in other countries it flowers and fruits from one to three times. It takes around 60 days from flowering to the harvesting phase. Its yield depends on water availability, soil, altitude, sunlight and temperature. Its yield varies from 0.5 tonnes/ha/year to 15 tonnes/ha/year. The seeds can easily be collected because the plant is only about 2 meters tall.7

Jatropha oil extraction is carried out by:

Jatropha is used to produce renewable energy in the form of biodiesel, which releases 80% less CO2, 100% lower SO2, and has a higher flashpoint than diesel fuel.9 Its seeds contain about 30 – 50% non-edible oil,10 is comparable to diesel fuel and can be switched directly in most types of diesel engines without or minor adjustment on the engine.11

Table: Comparison of the properties of Diesel fuel and Jatropha oil

Jatropha cultivated in Cambodia could be a source of biofuel. Research recommends that biodiesel could be produced in Cambodia from jatropha on a marketable basis for around US$0.53 per liter. More than 10 enterprises are using jatropha, but there is no large-scale production.12 Significant production of jatropha for biodiesel has been hindered due to a lack of suitable technologies and failed investment programs.13 Based on figures from TRIDGE, more than 5.5 million metric tonnes of jatropha oil was imported into Cambodia in 2019.

However, some rural villages still use jatropha oil as an energy source. In Bot Trang and Poy Char, Banteay Meanchey Province, 80 households and 360 households, respectively, get electricity from a mini-grid exclusively using jatropha oil.14

Energy security is a critical matter for decision-makers and existing efforts have focused on model biofuel projects using jatropha to raise awareness of the processes and technology. Energy policies principally address rural electrification in general and there are no specific policies concerning biofuels.15

The consumption of biodiesel from jatropha is seen as a possible step to reduce the greenhouse gas emissions that contribute to climate change. Although Cambodia has no overall policy on renewable energy consumption, the government has committed to supply energy to rural communities. As a follower of UNFCCC (United Nations Framework Convention on Climate Change), Cambodia has committed to address climate change by various methods, particularly adaptation and mitigation. In the second national communication by UNFCCC, larger production of biofuels was recommended.16