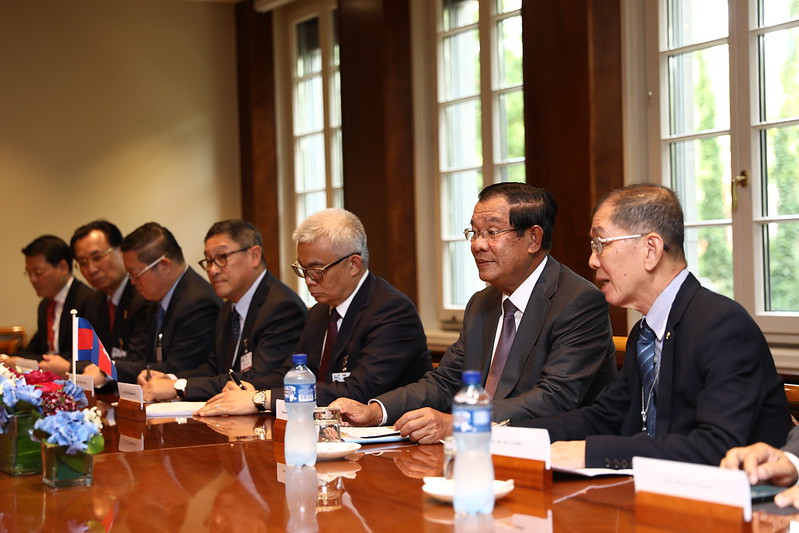 Prime Minister of Cambodia, Hun Sen, and other Cambodian Ministers were at the Aid for Trade Global Review 2019. Photo by World Trade Organization (WTO), taken on 03 July 2019. Licensed under CC BY-SA 2.0.

After two decades of strong economic performance, Cambodia moved into the lower middle-income group of countries in 2015 and set a target of attaining upper middle-income status by 2030. Cambodia’s economy was one of the fastest-growing economies as it sustained an average 7.7 percent annual growth rate between 1998 and 2019. However, the economic growth dropped significantly to -3.1 percent in 2020 due to the COVID-19 pandemic and partial suspension of preferential access to the EU market under the “Everything but Arms” agreement.1 Cambodia’s economy is expected to grow by 5.5 percent in 2022 based on Asian Development Bank forecasts.2

Cambodia’s exports are dominated by garments, footwear and travel goods. According to the Ministry of Commerce’s (MoC) annual performance report in 2020, the top 5 destinations for exports in 2020 were the United States, ASEAN countries, China, Japan and the United Kingdom. Total export value reached $17 215.37 million in 2020, which was an increase of 16.7 percent from the 2019 figure of $14 748.74 million, despite the pandemic.3 Export figures are​ expected to continue to grow with the increasing availability of COVID-19 vaccines and the recovery of the U.S. economy in 2021.4

The garment sector has been one of the pillars of Cambodia’s economy, although it has been affected by the pandemic. The National Bank of Cambodia’s annual report in 2019 says that the export of garments increased 11 percent in 2018 compared to the previous year,5 while MoC’s annual report points out that it decreased 10.2 percent from $8 266.35 million in 2019 to $7 420.28 million in 2020. The pandemic caused some factories to close which negatively affected both exports and employment, although garment workers still received $70 per month.

The Garment Manufacturers Association in Cambodia (GMAC) announced on 6 January 2021 that the U.S. Generalized System of Preferences (GSP) scheme, allowing Cambodia to enjoy the benefit of a low tariff rate, had expired on 31 December 2020. 119 countries would be face tariffs based on the most-favored-nation (MFN) status. The president of the Cambodian Labour Confederation (CLC), Ath Thorn, said: “For Cambodia, garment products under MFN status are taxed about 12 to 33 percent”.6  The president of GMAC, Van Sou Leng, told news media that “There will be a drop in garment exports in the coming months...”. The decline in the total value of exports was due to the COVID-19 pandemic, lockdowns, supply chain disruptions and a decline in international demand, however it is likely to bounce back after reopenings following lockdowns in export destination countries.7

The footwear sector has provided large opportunities for investment and production because of its significant growth between 2013 and 2018, with Cambodia added to the list of the top 10 footwear exporting countries for the first time in 2016. During these five years, the total value of exporting footwear grew by 4.4 percent while the share of the garment sector declined by almost 10 percent, according to the International Labour Organisation (ILO) research bulletin on Cambodia’s garment, textile, and footwear industry.8

Once again, the pandemic led to a downturn in the export of footwear, from $1 264.62 million in 2019 to $1 116.73 million in 2020, based on the annual report of the MoC in 2020.9 The president of the Cambodia Footwear Association (CFA), Oknha Ly Khun Thai, said that due to the pandemic, people were forced to stay indoors, and it had shut down the tourism sector in each country, which greatly reduced the demand for footwear. He also added: “The reason for the decline in the value of footwear exports from Cambodia in the first quarter was due to declining demand on the international market, and not related to manufacturing activities”. With the setup of the CFA, Cambodia is expected to attract more investors and the footwear industry is likely to grow.10

Travel goods, such as suitcases, backpacks, handbags and wallets, rank third in the top exports from Cambodia. This growth is due to the joint lobby efforts of the MoC and GMAC to the U.S. Congress in the GSP scheme, since the U.S. was known as the biggest export market for these products, accounting for about 80 percent of their total exports in 2019.11  The advantage did not last for long because, as the President of CLC Ath Thorn pointed out, with the MFN status, goods exported to the U.S. will now be taxed about 10 to 30 percent. He was worried that the expiration of the GSP scheme would affect exports, particularly travel goods.12  The MoC stated in its annual report in 2020 that the export of travel goods dropped 10.8 percent from $1 078.89 million in 2019 to $967.7 million in 2020.13

The Ministry of Labour and Vocational Training has said that it is committed to expand the scope of the Better Factories Cambodia (BFC) programme to also include travel goods and bag factories to support the working condition of the workers and boost the competitiveness and growth in the industry. BFC was established in 2001, an initiative of the International Labour Organisation (ILO) and supported by the International Finance Corporation (IFC) which is part of the World Bank.14 By including the travel goods and bag sector, the owners of factories and manufacturing enterprises must register with the BFC before applying to export goods under preferential trade schemes.15