In October 2020, tropical storms LINFA and NANGKA struck Vietnam, Cambodia, Laos and Thailand. The storms resulted in at least 48 fatalities, 15 missing people and more than 830,400 affected citizens, as reported by the ASEAN Coordinating Centre for Humanitarian Assistance on disaster management (the AHA Centre).1

In Cambodia, 11 fatalities occurred and about 67,995 households in 19 provinces were affected by flash floods. The worst affected provinces were Battambang (38,890 households), Pursat (18,365 households), and Banteay Meanchey (7,034 households).2 By mid-October, flash floods as a result of the storms had forced the evacuation of 25,192 people according to the National Committee for Disaster Management.3The Singapore Red Cross will allocate a total of USD 75,000 in aid for disaster relief and recovery operations to the Cambodia Red Cross, Lao Red Cross and Vietnam Red Cross (USD 25,000 each).4USD 100,000 in immediate humanitarian aid is being provided through the U.S. Agency for International Development (USAID).5

Map of INFORM risk index in Lower Mekong Countries in 2020

Cambodia is one of the Asian countries considered to be most prone to disaster. The most common natural disasters include floods, drought and storms/typhoons. Cambodia has a medium-risk ranking on the INFORM 2020 index, but the country scores highly on some individual indicators, including vulnerability and lack of coping capacity. It has a score of 6.2 out of 10 for vulnerability due to deprivation and lack of development.6

Climate change coupled with urban development have caused increases in destructive flooding. Unplanned urbanization is also contributing to increased exposure. Approximately 250,000 informal settlers reside in Phnom Penh, a city with an estimated population of 1.6 million people.7 Increased exposure to hazards is often associated with a lack of infrastructure, informal settlements occupying low-lying areas and riverbanks susceptible to flooding, and inadequate drainage. Eviction is always a possibility due to lack of legal ownership, and the poor-quality dwellings are not resilient enough to withstand heavy weather.8 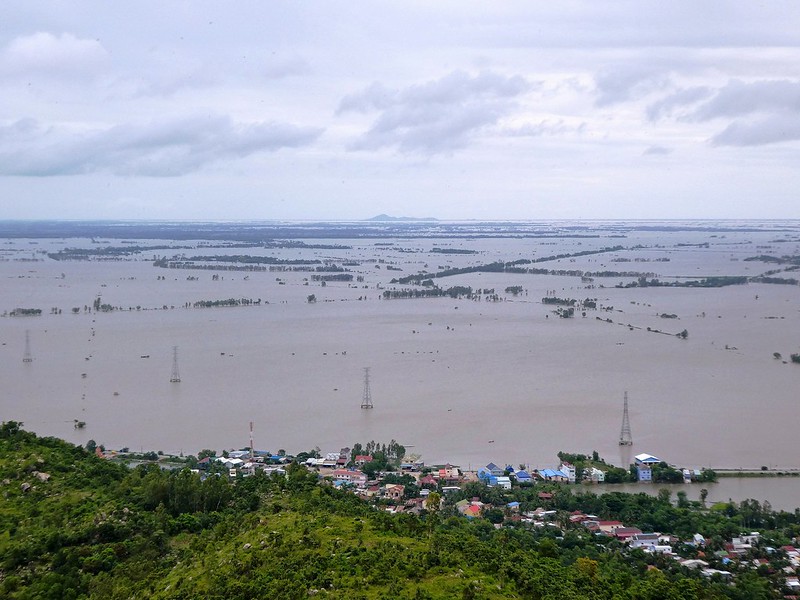 Climate change is threatening the development of Cambodia and contributes to increasing hazards, despite the government’s efforts to mainstream environmental protection and climate adaptation. The future projections indicate an increase in annual rainfall, but also a decrease in precipitation in the northeast of the country. The coastline is expected to suffer from more inundation during the next 90 years as a result of sea level rise.9 Low-lying farming lands would not only be exposed to increased flooding, but also to saline intrusion, and a 10 percent decline in rice yields is estimated for every 1°C increase in temperature, indicating that climate change is a serious threat to food security and safety.10

Almost every year since 2000 there has been a flood that resulted in at least 5 people’s deaths.11