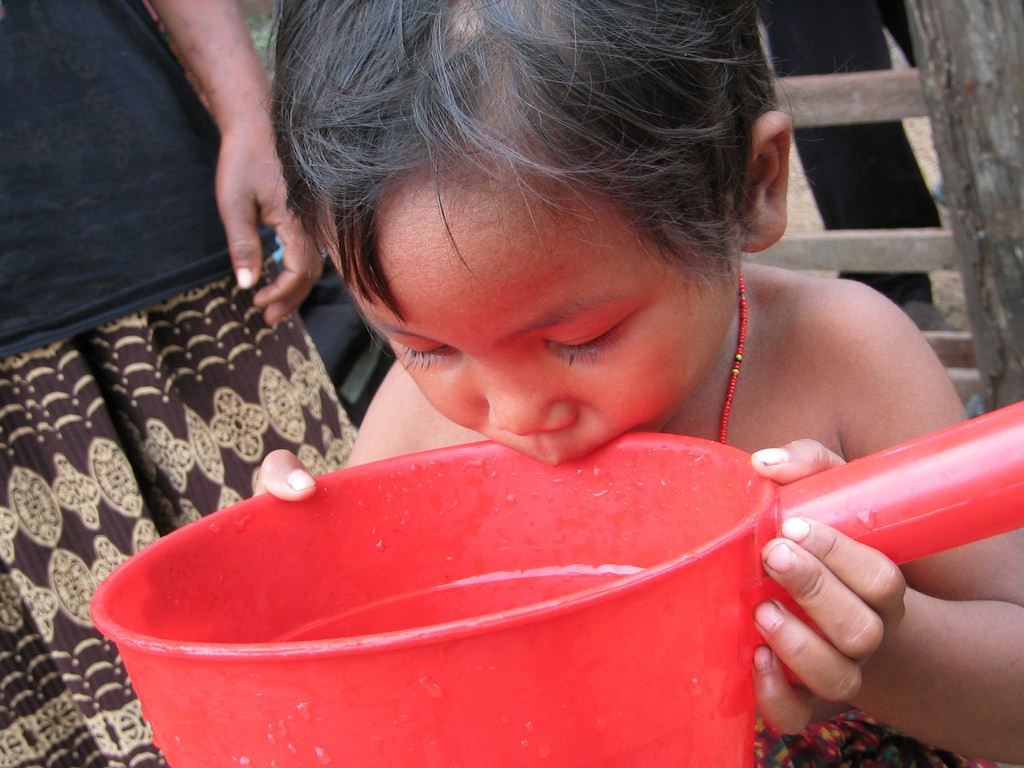 Water pollution can be defined in many different ways. Basically, it is the contamination of water when pollutants are discharged into water bodies without treatment (removal of pollutants). Water pollution is largely caused by industrial, agricultural and household wastes which significantly affect human and animal health and the environmental quality of water bodies.

In Cambodia, access to safe and clean water remains a challenge, particularly for rural households as access to water facilities and infrastructure is limited outside the main cities.

UNICEF found that 6.3 million out of 14.9 million Cambodians lack access to clean water.1 During the 2014 World Water Day, UNICEF Cambodia urged the government to put the rural water supply in greater focus. The organization said the main reason millions of Cambodians lack access to clean water is that the government has made the rural water supply a lesser priority than other development areas.2

Arsenic can be found naturally in the groundwater and Mekong River basin. Kandal, Prey Veng, Kampong Cham, Kampong Chhnang, Kampong Thom and Kratie provinces have some of the highest arsenic concentrations in the country.6 Amongst these, Kandal province has the most extreme arsenic pollution. In 2014, The Phnom Penh Post reported that 35% of more than 15,000 wells sampled in Kandal contained arsenic exceeding the national limit of 0.05 mg per litre, and around 54% measured above the WHO standard of 0.01 mg per litre.7

Directly or indirectly, water essentially keeps people and the environment healthy. Arsenic contamination would put millions of people at risk if no action were taken.

A UNICEF briefing found that arsenic exposure has already caused more than 500 documented cases of illness, and numerous amputations and fatalities.8

A Sub-Decree on Water Pollution was approved in 1999. The sub-decree states that the Ministry of Environment (MOE) has the roles and responsibilities to monitor, inspect and report on any potentially polluting activities. Companies or organisations discharging or transporting wastewater must request permits from MOE.9

The Sub-Decree on Water Pollution sets out two categories for water pollution sources:10

However, recently local media have reported some emerging cases related to water pollution which are not yet well-monitored.

For example, in 2015, indigenous Kuy villagers from Thala Barivat district in Stung Treng province reported that a sawmill polluted their local waterway, which contaminated the water and crops and caused skin diseases. Radio Free Asia mentioned that wastewater was dumped into the stream which local people use for their daily needs including bathing, drinking, washing and cooking.12

Similarly, in early 2016, Pailin’s local cassava processing factories were pointed out as the cause of water pollution. The Phnom Penh Post reported that the waste from the plantations had killed fish and polluted drinking water and affected 300 families in Treng commune, Ratanak Mondul district, Battambang province.13 As a solution, the businesses built ponds near their production facilities to dump the waste and communities were forced to buy bottled water or build wells to use.14 However, to date, actions taken are not effective enough to tackle the pollution.