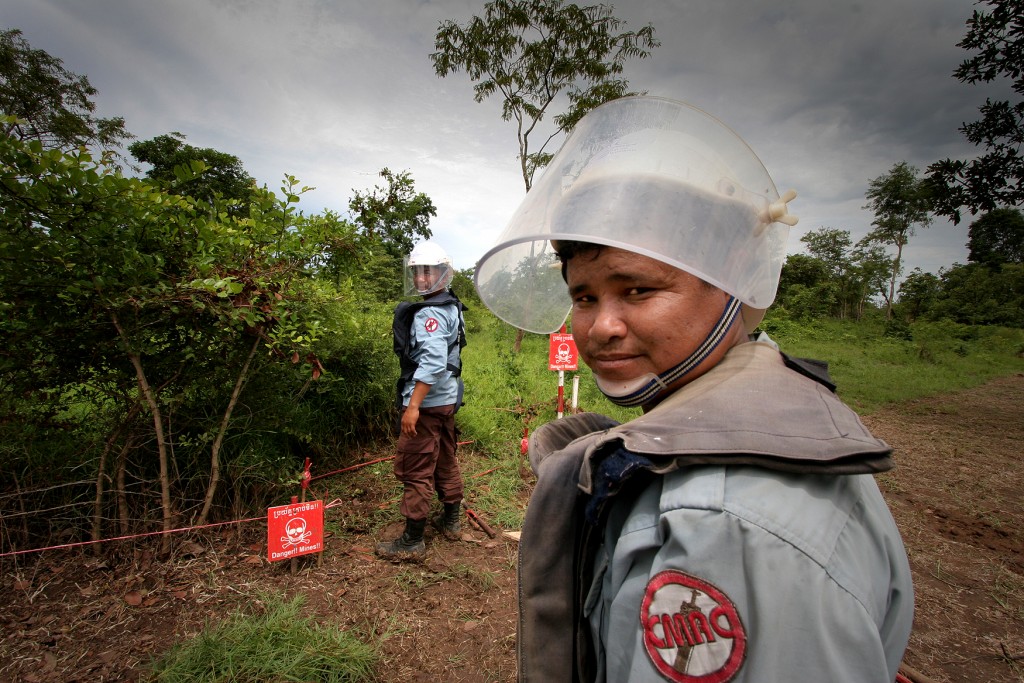 From 1992 to 2018, over one million landmines and almost three million explosive remnants of war (ERW) were removed from over 1,800 square kilometres of land, making it safe for housing and farming. The numbers killed from these war remnants fell from 4,320 in 1996 to 58 in 2018.1

Cambodia has one of largest landmine and explosive remnants of war (ERW) contaminations in the world.2 Cambodia joined the Anti-Personnel Mine Ban Convention in the late 1990s and the Cambodian government and a network of development partners are working to rid the country of landmines and ERW by 2025.

Landmines and unexploded ordnance in Cambodia

Landmines are munitions placed under, on or near the ground or other surfaces to be exploded by the presence, proximity or contact of a person or vehicle.3 There are two types: anti-personnel and anti-vehicle. Unexploded ordnance (UXO) is a weapon that did not explode when it was intended to and may still detonate.4 These can include cluster munitions, which are weapons that release numerous submunitions over a wide area when detonated.5

Landmines first became prevalent in Cambodia following the ousting of the Khmer Rouge in 1979. After driving the Khmer Rouge into Thailand, the Vietnamese military forced civilians to create a defensive minefield along the Thai-Cambodian border. In subsequent years, the new state, Khmer Rouge remnants and monarchist opposition forces laid more landmines as battlefronts shifted. UXO and cluster munitions can still be found throughout Cambodia as a result of US bombing in the 1960s and 1970s.6

United Kingdom-based HALO, the largest demining organisation in the world, was the first organisation to begin working in Cambodia in 1991. In 2018 it had over 1,100 national staff working in the provinces of Battambang, Banteay Meanchey, Oddar Meanchey, Siem Reap, Preah Vihear, Pursat, Koh Kong and Pailin.7 In 2018 the United Kingdom pledged £7.5 million (US$9.7 million) for demining work in Cambodia.8

In 1999, the Anti-Personnel Mine Ban Convention, of which Cambodia was a participant, became effective. The international convention bans the use, stockpiling, production and transfer of anti-personnel mines; requires the destruction of all landmines; and mandates that the state assist landmine victims.9 Article 5 of the convention allowed 10 years for the destruction of all anti-personnel land mines,10 which Cambodia was able to extend until 2019.11

Royal Decree No.177 established the Cambodian Mine Action and Victim Assistance Authority (CMAA) in 2000 to regulate, monitor and coordinate the mine action sector. The CMAA also incorporates development projects into mine action activities and coordinates the Mine Action Technical Working Group (MA-TWG). A joint effort of the government and development partners, the MA-TWG aims to promote the alignment and harmonization of aid for the mine action sector. The CMAA is tasked with regulating all demining activities, releasing land cleared of landmines and providing victim assistance and mine risk education.12

The mine action sector is regulated further by Sub-decree No.70 on the Socioeconomic Management of Mine Clearance Operations, which established guidelines for clearing and releasing land to communities.13 This process involves conducting meetings between communities affected by landmines and Mine Action Planning Units to provide information and draft action plans for landmine clearance. Land is released through a non-technical or baseline survey showing no contamination, a detailed topographical and technical survey of areas suspected of contamination, or clearance of contaminated areas.14

A vast network of government agencies and development partners are involved in the demining process. The chief operators include the http://cmac.gov.kh/m/kh/, the Royal Cambodian Armed Forces, HALO Trust and the Mines Advisory Group.15

Landmines and ERW present significant challenges to Cambodia’s development. They prevent access to land, infrastructure, basic social services, irrigation and safe drinking water.17 Further, landmine and ERW survivors receive little support, though the government is taking steps to improve services for victims. Cambodia has the highest ratio of amputees per capita in the world, and landmine victims often lack access to education, training, employment, and physical and mental health services. Victims are often illiterate and landless, and women are more likely to experience the negative ramifications of ill-health, injury and death.18

By the end of 2018 it was estimated that 2,125 square kilometres of land remain contaminated.25

Cambodia has added a new Sustainable Development Goal (18) around landmines and unexploded ordnance.26 The three specific targets of the goal are: