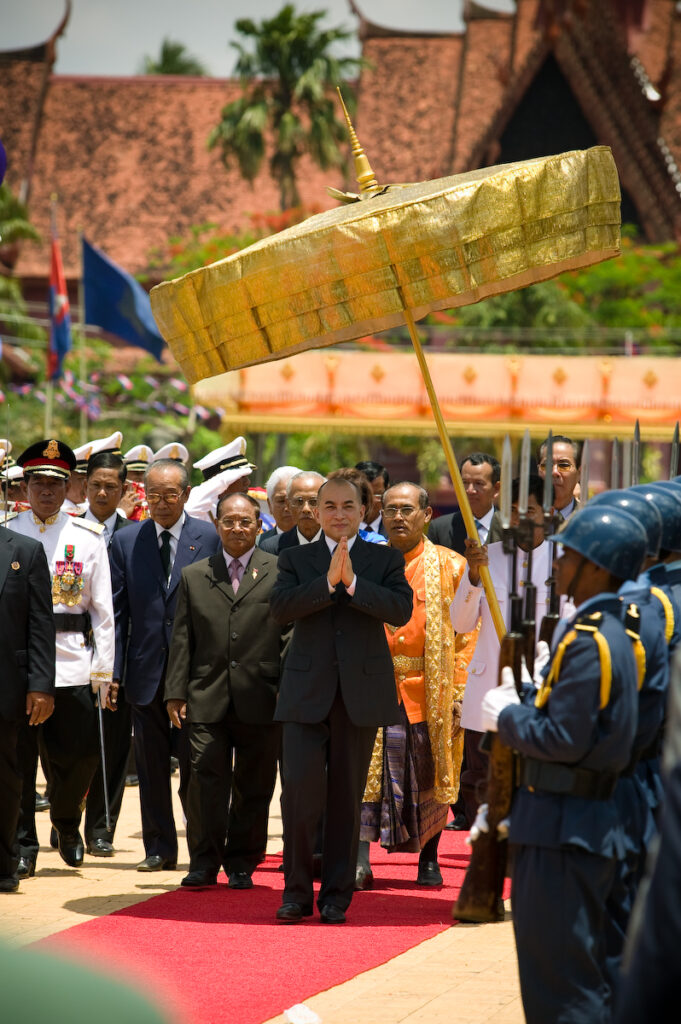 His Majesty, King Norodom Sihamoni of the Kingdom of Cambodia at the Royal Ploughing Ceremony in Phnom Penh. Photo by Jeffdkennel, taken on 23 May 2008. Licensed under CC BY-SA 3.0.

Cambodia adopted this form of government in 1993, following the Paris Peace Accords.4 The table below shows the various political regimes in Cambodia over the past 150 years.

Under the 1993 Constitution, the powers of the government are separated into three branches: the executive, the legislative and the judiciary. The Council of Ministers (also known as the Cabinet of Cambodia) heads the executive branch, which includes the Prime Minister and all the ministries. Parliament has legislative power, while the power of the judiciary is vested in the Supreme Court, the Appeals Court and the municipal/provincial courts. The Parliament (made up of the National Assembly and the Senate) is led by a president and two vice presidents, selected through an absolute majority vote of assembly members before each legislative session.

According to the principle of separation of powers outlined in Art. 51 of the Constitution, each government branch should be independent to ensure that one body cannot exercise absolute control over the law. However this separation exists alongside the system of “checks and balances”—also required under the Constitution (Art. 78 and Art. 98)—which results in the executive branch having a close relationship with the parliament.

Cambodia is an indivisible state (that is, it does not share its sovereignty with any other state). While the country’s administration is divided into the capital city (which is administratively the same level as a province), provinces, districts and communes,5 the organization and functioning of provincial and local governments remain under the control of the national government. The autonomy of local administration and finance depends on the extent of decentralization and deconcentration allowed by the Cabinet of Cambodia.6 Thus, all lower levels of administration exercise authority on behalf of the national government.

The World Bank’s Worldwide Governance Indicators (WGI) show that rankings for certain measures of Cambodia’s political governance have stayed relatively low over the past 15 years.7 The measure for ‘Political Stability and Absence of Violence/Terrorism’ is the only measure that shows significant improvement since 1996. This may be attributable to the longevity of the current ruling party and Prime Minister.

The government has a major decentralization strategy underway, largely under the National Program for Democratic Development at the Sub-national Level 2010-2019. Local government reform efforts focus on developing the operational capacity of districts and municipalities within a framework of oversight by national authorities with the capacity to enforce them.9

Key central government functions will be transferred to sub-national authorities, with resources (revenue, personnel, property, and management capacity), powers and duties. The ADB supports projects under a decentralization agenda to (among other goals) give rural populations greater access to public services.12