In Cambodia, alternate periods of drought and heavy rains bring challenges for water management. The current trends show increasing annual rainfall and temperature throughout Cambodia, with a likelihood that both flooding and droughts will increase in frequency, severity and duration1. Water management involves issues of economic development, food security and sanitation, and is closely bound with disaster management and climate change plans. 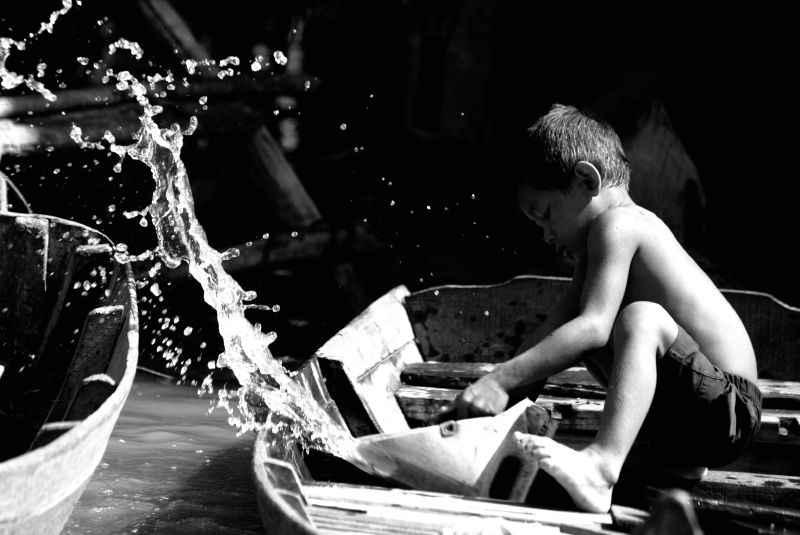 While climate extremes and climate change pose major challenges for water management, some major infrastructure projects such as large hydropower dams in Cambodia and neighboring countries are more immediately threatening than natural causes2.

Development of water infrastructure, water policy and administration are essential for Cambodia, particularly for guaranteeing clean water for drinking and sanitation, and water for irrigation purposes.

Water resources are owned by the state3, which is responsible for its management through ministries and authorities across the country. Everyone can use water resources for vital needs and domestic irrigation. Other types of exploitation are subject to licensing. A sub-decree covering this is currently being drafted.

The primary legal basis of water management is the 2007 Law on Water, which contains the regulatory framework of water policy and its administration.

Water management has been the responsibility of the Government long before the law was passed. The policies enacted in recent decades show that water management is usually a part of wider policies regarding economic development, natural disaster, improved sanitation and more recently, climate change. The two most important plans in the governmental hierarchy are the Rectangular Strategy phase III and the National Strategic Development Plan with a budget of 26.59 billion USD4.

Several ministries have come up with their own plans, setting various objectives for Cambodian development. Interministerial coordination is mandatory since there are overlaps between each plan, all aiming to provide water and food security. Interconnection between land, water and agriculture makes it harder for coordination between related ministries. Some plans enhancing agriculture intensification might well affect others issues directly or indirectly.

The other relevant ministries are:

In total, no less than 9 ministries are directly or indirectly involved with water management in Cambodia6.

This is complemented by government bodies such as intercommittes and agencies, the most relevant being the National Council on Sustainable Development (which replaces the former National Climate Change Committee and National Council for Green Growth). Related plans can be found here.

Water is also administrated on a local level at the:

Water policy started on a regional level. In 1995 the Agreement on Sustainable Development in Mekong River Basin, which established the Mekong River Commission, was signed with Cambodian’s neighboring countries. This was followed by the National Strategic Development plan of 2006-20107, that contains extensive content related to water.

The Law on Water Resource Management was established in 2007.

The objective was to increase the area of irrigated cropland, and to drive investment in the water sector. The Law also determines the rights and obligations of water users, the principles of resource management and the participation of users in the development of water resources8.

Ministry of Water Resources Management (MoWRM) is in charge of defining policies and strategic development, as well as conducting research and investigation. It is also in charge of flood and drought control, and takes action with concerned Ministries and local authorities.

Integrated water resource management (IWRM) is the main tool for implementing the law.  MoWRM keeps an inventory that indicates location, quantity and quality of the resources. Data collected is submitted to the Ministry and must be freely available to the public9.

Ministry of Water Resources Management issues licenses and permits for water use. MoWRM prepared four sub-decrees to support the Law:

In 2003, the Government adopted the National Water Supply and Sanitation Sector Policy with a view to provide complete coverage by 2025.

The purpose of this Strategy is to define the water supply, sanitation and hygiene services to be made available to people living in rural areas and the institutional arrangements and the financial, human and other resources necessary to sustainably provide these services. One of the underlying purposes is to accelerate progress toward the achievement of the Sector Vision in 2025.

The National Strategy for Agriculture and Water (SAW) focuses on investments in irrigation, especially large-scale infrastructure, typically carried out with the assistance of external partners. In addition to the development of new schemes, considerable work is going into rehabilitation of existing schemes.

A key document on irrigation is the Circular on the Implementation Policy for Sustainable Irrigation Systems (1999). This recognized farmer water user communities (FWUC) as legal entities in charge of everyday management of irrigation schemes. It includes the provision that irrigation systems will be developed only with FWUC’s approval. Technical support is provided by the MoWRM. Many observers (including Asian Development Bank) believe the system has not been working effectively, however12.

Outside of government policy, a key target for policy was target 3 of Millenium Development Goal 7: to halve by 2015 the proportion of people without sustainable access to safe drinking water and basic sanitation. As UNICEF has pointed out, increasing water and sanitation access for the poor has a fundamental impact on poverty, gender equality, health and education13.

The Ministry of Rural Development says Cambodia passed this MDG milestone last year with half of rural areas now having access to clean drinking water. It also said that, as of early 2016, 46 percent of the rural population have access to latrines, hand-washing and hygiene facilities14.

Government policy on increasing rice production has led to large-scale land acquisition for contract farming. It introduced gradual commercialization of water which challenges households and small farms. Although still in the process of implementation, contract farming is one key issue for water management15, since the development plan still focuses on rice exports, which need extended irrigation infrastructure. The challenge is to work out how to use water to support economic development while also supporting poverty reduction through food security and sanitation at a local level. There are also technical challenges in the development of water resources in areas where groundwater is contaminated with arsenic.