The National Bank of Cambodia (NBC) was established through the Law on the organization and conduct of the National Bank of Cambodia in 1996.1 NBC is the nation’s central bank, whose mission is to determine and direct the monetary policy in order to maintain price stability within the framework of economic and financial policy in Cambodia. NBC is also the monetary and supervisory authority through being a sole issuer of the national currency, Khmer riel, and having the authority to license, delicense, regulate, and supervise banks and financial institutions.2

NBC has 21 branches, which the headquarter is located in Phnom Penh. Its structure consists of the board of directors, the highest decision-making body and seven members, governors, and deputy governors. There are also five divisions at the operational level to execute day-to-day functions: secretariat general, directorate general, directorate general supervision, inspector general, and cash general.3 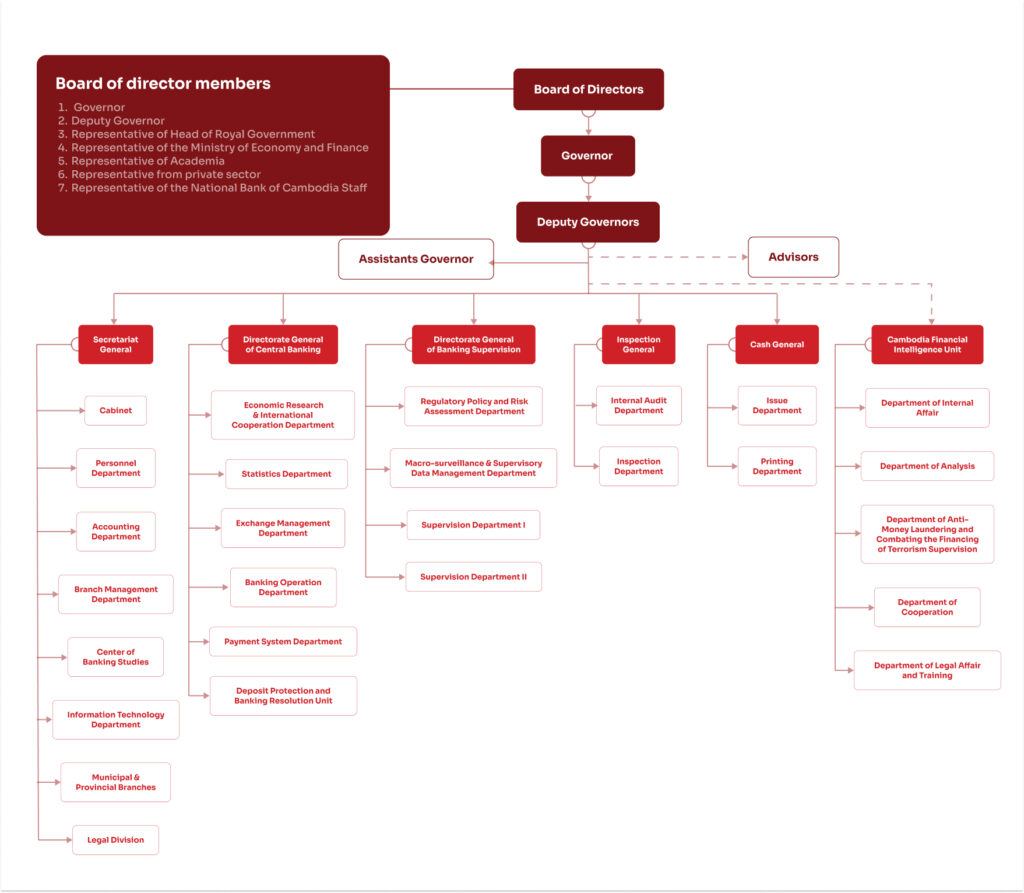 Structure of National Bank of Cambodia, dated on 11 March 2022. Licensed not specified.

NBC has been introducing various policies over the last 15 years to phase out of the US dollar and promote riel as the sole currency in the country. The progress was slow at the start because of high dollarization and lack of cooperation from stakeholders, so it was hard for the central bank to implement monetary policies.4 The riel has increased its role in Cambodia’s society and economy at all levels under the efforts of the Royal Government, NBC, and stakeholders5 since they have been trying to promote the use of the riel in Cambodia and cross-border trade to strengthen the local currency and wean the economy off the dollar. Chea Serey, NBC Director General, said the dependence on the US currency leaves the country vulnerable to any issues that the dollar may face, which Cambodia can lose its control over the monetary policy.6 Similarly, NBC governor, Chea Chanto, said at the closing ceremony of the central bank’s 2019 Review and 2020 Outlook report’s launch that dollarization slightly decreased in 2019, but it still remained high. More prudent policy is needed since it is crucial to promote the use of the riel for the benefit of Cambodia’s economy.7

Riel is important for the following reasons:8

On 20 March 2022, NBC organized and celebrated the 42nd anniversary of the reintroduction of the riel (20 March 1980 – 20 March 2022) at Chip Mong Mall Sen Sok to raise public awareness about the history of the currency and its importance. Riel Day 2022 will also be celebrated at Kampong Thom, Kampong Cham, Kamport, and Battambang.9

Since 2020, COVID-19 has impacted the businesses and household income in Cambodia after going through 4 community outbreaks (between 7 March and 20 April 2020, 7 November and 14 November 2020, 27 November and 15 December 2020, and 20 February 2021).10 The NBC has introduced different measures to support economic recovery, banking institutions, and households,11 which the International Monetary Fund (IMF) praised the government and NBC for responding quickly to prevent the spread and impact of the pandemic on business activities and vulnerable people.12 The Governor of the NBC, Chea Chanto, said that the new COVID-19 variants will continue to threaten the regional and global economies, which stricter preventive control and economic measures of the pandemic will boost economic activities in different sectors including trade, investment, transport and telecommunication, and domestic tourism. In 2022, NBC will introduce ten main policies to support the economic growth in Cambodia.13

The ten main policies include:14

Bakong system is a new service of payment system launched and supervised by NBC in October 2020 to strengthen the riel and reduce dependence on the US dollar.15 It also allows the users to receive and transfer funds using their personalized QR code or mobile phone number instead of bank account number.16 Chea Serey said that Bakong will help foster financial inclusion and promote the use of the riel, and technology will be useful for greater innovation in the financial realm and ease the migrant workers’ burden when sending remittances back home.17 In the first half of 2021, there were more than 1.4 million Bakong transactions accounting for around $500 million.18

Contact the headquarter of the National Bank of Cambodia:

Related to National Bank of Cambodia