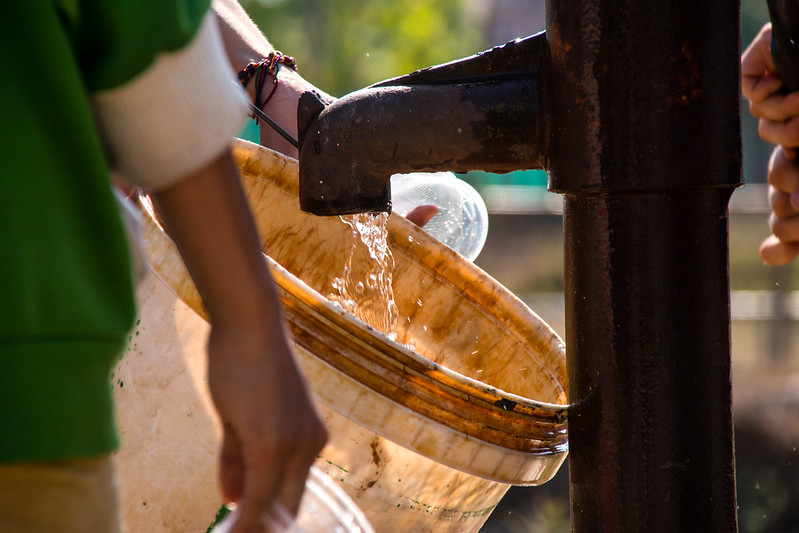 Information about groundwater is currently scarce in Cambodia. Two major research projects have been conducted within the past 20 years, although there has been no national plan or joint research. The latest data collection was conducted by the Japan International Cooperation Agency in 2002 and by the International Development Enterprises in 2008.2 The results are widely different from one study to the other because research is mostly based on modelling tools. Field studies are impossible when it comes to groundwater.

Sustainability of the groundwater resource is the main concern for future research, especially since new wells are built every year, while water is getting pumped from deeper in the earth. Recharge relies on diverse factors, which include rainfall rate, land slope, soil porosity, climate, evapotranspiration and vegetation among others. It differs widely across Cambodia, mainly because rainfall is not distributed uniformly, and varies from 1,000 mm/year to over 3,000 mm/year depending on the region.3 There are rapid changes in groundwater exploitation that are threatening the resource’s sustainability. Recharge rates are low overall.4

Groundwater is mostly used in rural Cambodia. It is generally less contaminated than surface water, and provides an essential resource when surface water runs short. It is recognized that most untreated surface water in Cambodia is potentially contaminated.5 More than half of the total drinking water comes from groundwater during the dry season6.

There are two methods for its extraction: dug wells (3–15 meters) and tube wells (15–100 meters). Tube wells are mostly used in Prey Veng and Svay Rieng (South-east Cambodia). Dug wells are commonly found in Kampong Thom province, as well as in central and North-east Cambodia.7 Well infrastructure depends on the depth at which water can be found underground.

The cost remains high for communities. While a 30-metre well can cost $500 to dig, a 100-metre well can costs $7,000 or more. There are currently around 270,000 tube wells in Cambodia, most of them operated by hand pump.8 Today, groundwater is mostly used for household purposes, daily livelihoods, crop irrigation and light industry.

Farmers are seeking direct control over water access.9 Groundwater is used mainly to provide partial irrigation in late dry season, and for complementary irrigation of the wet season rice crop.10 In some parts of the country that are far away from water sources and irrigation systems, people rely heavily on groundwater for their cultivated land.

Besides its use for domestic consumption and farming, groundwater is increasingly exploited by the industrial sector. With high consumption of underground water for agro-industrial purposes, sustainability of the resource may be threatened by over-extraction.11

There are issues around groundwater depletion, deterioration of water quality and the high cost of irrigation water.

According to the Global Groundwater Monitoring Network, water management decisions rely strongly on the availability and quality of monitoring data.12 A Stanford University study13 published in February 2016 found that groundwater use in Cambodia is rising by 10 percent each year. The study found that growing dependence on groundwater could drop the water table below the level at which conventional suction pumps can operate within 15 years.

The United Nations’ Food and Agriculture Organization (FAO) estimates the average aquifer recharge to be 17.6 km³ per year which is 5% of the country’s annual rainfall. Declining groundwater levels have been reported and the resource sustainability is uncertain. 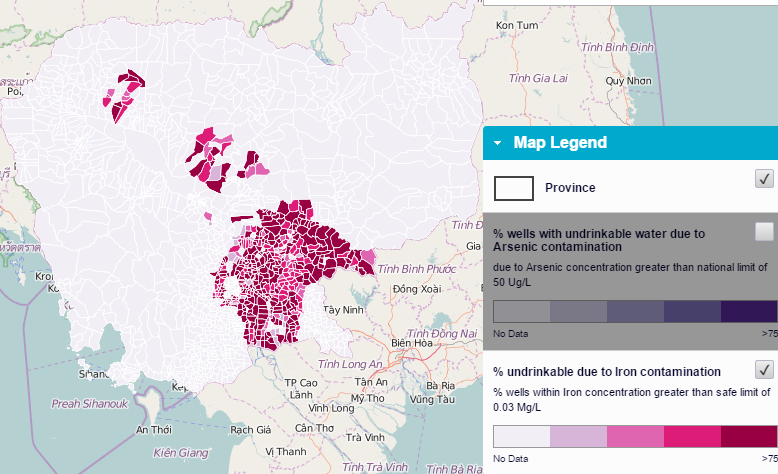 WSP Program. “Wells with undrinkable water due to Arsenic contamination”

Water quality is at risk due to an expansion of industrial zones and the release of increasing amounts of untreated industrial waste. High iron levels are encountered in about ten percent of tube wells, particularly in Kandal Province. Traces of arsenic and manganese have also been reported.14 Increasing salinity is seen in southern provinces with seawater infiltration.

The Law on Water Resources Management of 2007 dedicates two articles17 to groundwater. It is mandatory to report to the Ministry of Water Resources and Meteorology (MoWRM) when groundwater is discovered in the course of mining, drilling or other activities. Above a certain quantity, groundwater extraction is subject to licensing.

Investigation into developing an arsenic strategy has been conducted by the Ministry of Rural Development (MRD) and Institute of Technology of Cambodia to prevent health problems from the consumption of arsenic-contaminated water. Groundwater water quality mapping is in process along the required standards of the World Health Organization18, through a joint-program among the key stakeholders, MoWRM, MRD and the World Bank. According to MoWRM, a groundwater study is in progress and 7 provinces out of 24 have been covered.19