SDG 13 is aimed at taking urgent action to combat climate change impacts by developing the capacity of each country to mitigate climate risks and work towards adaptation. Least developed nations, landlocked countries and small island states are recognised as especially in need of support in addressing climate change. They often have the least capacity to adapt and suffer more from the impacts.1

Transition from the MDG targets to SDG 13 in Cambodia

Climate change was not specifically mentioned as part of the earlier Millennium Development Goals (MDGs). However, the first three indicators of MDG target 7.B measure factors that contribute to a changing climate4 such as forest cover (indicator 7.1), CO2 emissions (indicator 7.2) and the consumption of ozone-depleting substances (indicator 7.3).

The consumption of ozone-depleting substances was reduced by 90.4 percent between 2002 and 2008 in Cambodia.5 Other indicators, however, were a lower priority for Cambodia than meeting poverty-reduction and economic development goals. This includes CO2 emissions, which increased from 0.16 to 0.438 metric tonnes per capita6 and forest cover, which officially declined to 53 percent in 2015.7 Some sources, using GIS analysis, suggest forest cover is actually as low as 48 percent.8 A localised proxy indicator of fuel wood dependency reaching 52 percent was also not achieved, with firewood and charcoal dependency remaining high at 73.9 percent and 8.1 percent, respectively.9

The SDG 13 targets were designed differently. The factors causing climate change have been left to other SDGs. Instead, the focus is on establishing an enabling environment for climate change adaptation, mitigation, and sustainable development to occur, through national policies that promote the participation of all citizens, especially marginalised communities in adapting to climate change.10 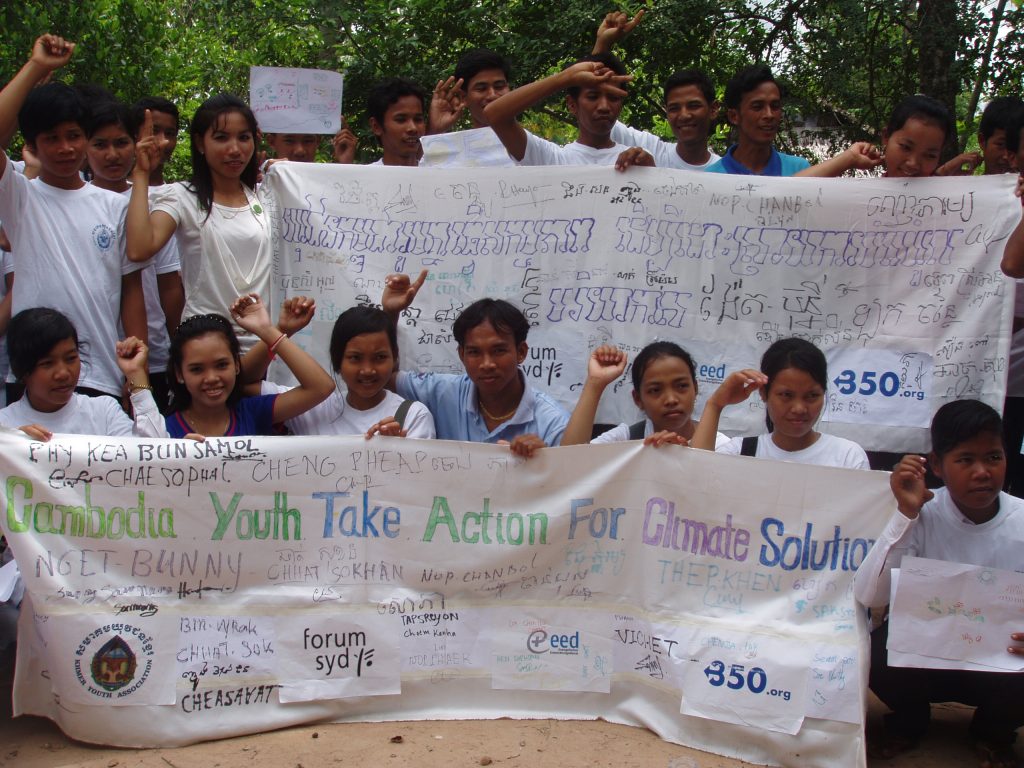 Localization of SDG 13 in Cambodia

Cambodia has had an historically low contribution to the causes of climate change, despite being one of the most vulnerable countries11 both in terms of risk to people’s lives and the economy.12

For example, the country regularly suffers both serious floods and droughts, with a high proportion of the labour force (58 percent in 2013) employed by the agriculture sector and almost 80 percent of the population dependent on subsistence, rain-fed agriculture in some way.13 Changes are predicted for rainfall patterns, temperature and sea levels. These changes are likely to bring impacts such as reduced agricultural yields, damage to infrastructure and the inundation of large areas of coastal lowlands in the south of the country.

Up to 43 percent of communes in Cambodia have been classified as highly vulnerable to climate change and a high number of people live not far above the poverty line. Climate changes are predicted to have a greater impact on women in the country due to the greater dependence women have on agriculture and natural resources.14

While a Rapid Integrated Assessment of Cambodia’s National Strategic Development Plan (NSDP) 2014–2018 in 2016 determined that the country has already integrated the SDG 13 targets well,15 the localization of SDG 13 targets need to consider this national context.

The local priorities of SDG target 13.1 are closely aligned with the four priority aims of the Sendai Framework for Disaster Risk Reduction (SFDRR).16 However, work is still required:

The ongoing development of a new M+E Framework for Climate Change to address these gaps18 will be used in Cambodia to more clearly define institutional responsibilities and governance frameworks, especially at the local level through finalising the National Disaster Management Law.19

Investments and development assistance are also focusing on climate change in Cambodia. For example, the US$166 million National Action Plan on Disaster Risk Reduction (NAP-DRR) 2014–201820 is focused on reducing economic losses to dwellings, livelihoods and essential infrastructure. In these areas currently there are no locally-led planning frameworks or access to information about disaster losses. This is expected to save $US 1.7 billion in avoided disaster impacts over the next 10 years.21

For SDG Target 13.2, Cambodia aligns its position on integrating climate change with national plans and policies with other least developed countries and the G77+ China group.22

In the context of Cambodia, however, the success of such plans can often be constrained by the capacity of the institutions involved and/or weak governance, particularly at the local level.28 Transparent access to information, backed by adequate resources and cooperation by local institutions will be required if SDG 13.3 is to be met.29

Video​ of a​ second​ study​ on​ understanding​ public​ perception​ of​ climate​ change​ in​ Cambodia,​ produced​ by​ National​ Council​ for​ Sustainable​ Development​ and​ Ministry​ of​ Environment.

Means of implementation for SDG 13 in Cambodia

Target 13.A is linked to a global commitment by developed countries as part of the Paris Agreement to provide at least US$100 billion annually for developing countries to assist with their climate change mitigation plans by 2020.30 Cambodia’s success will be heavily dependent on accessing external financial resources, such as the newly-established Green Climate Fund, due to insufficient government budgets.31 To make this easier, Cambodia has prioritised 40 different climate change actions through a new National Action Plan for Climate Change.32

Cambodia aims to demonstrate that it has planned actions based on measurably reducing impacts and benefiting those who are vulnerable. For example, vulnerability reduction assessments conducted through Cambodia have demonstrated that women in marginalised communities tend both to be more strongly impacted by climate change, while playing a crucial role in assessing social impacts of climate change.33

Two Gender Climate Change Action Plans (GCCAP) will be produced as part of the national and sub-national planning process of the CCCSP (2014–2023) to improve participation by local women and youth. The current GCCAP (2014–2018) has three main strategies:

However, while reducing gender vulnerability to climate change is a major objective of the CCCSP (2014–2023),35 Cambodia is not among the 40 percent of countries that have mentioned women and/or gender in the context of their INDC and priorities and ambitions for reducing emissions.36

Most of the SDG 13 indicators are intended to be measured at the global scale. Developed countries will support least-developed and landlocked countries and small island states to meet collective, rather than country-specific targets. Many of the indicators are intended to be monitored in line with the Paris Agreement on Climate Change, which comes into effect in 2020 based on previously-agreed intended nationally determined contributions.

Disaster loss information for indicator 13.1.1 is collected in a database managed by the UNISDR.37 The indicators for target 13.1 as a whole are aligned with the seven targets of the SFDRR and preparations are currently in place to improve data collection in Cambodia. This includes the disaggregation of information related to marginalised communities.38 Results from the period 2005 to 2015 will be compared with the final 10 years of the Sustainable Development Agenda (2020–2030).39 More information will be available regarding the SDG 13 indicators when the goal is reviewed at the High Level Political Forum in 2019.40