Cambodia has added an 18th goal to its localized version of the Sustainable Development Goals (SDGs) – “End the negative impact of mines/ERW and promote victim assistance”.1 The SDGs were adopted by all United Nations member states in 2015 as a universal call to action to end poverty, protect the planet and ensure that all people enjoy peace and prosperity by 2030. All the 17 SDGs are integrated, acknowledging that action in one area will affect outcomes in others, and thus development must balance social, economic and environmental sustainability.2 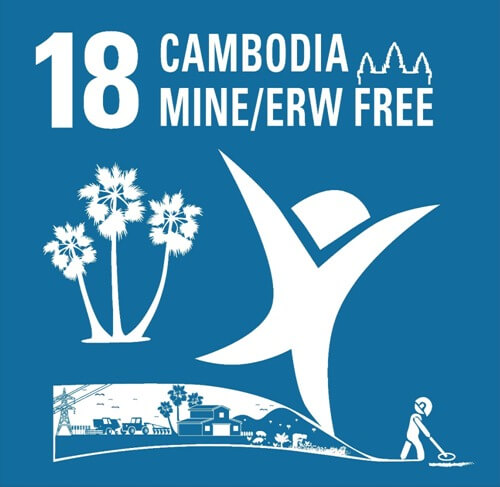 Following the endorsement of the SDGs at the UN General Assembly in late 2015, the Royal Government of Cambodia (RGC) worked to adapt the goals to the national context and has crafted a fully localized framework – the Cambodian SDGs (CSDGs).3 All 17 SDGs were selected, and one additional goal, CSDG 18, related to clearance of landmines and explosive remnants of war (ERW) was added. This reflects the national priority of de-mining in Cambodia. As a result, the final version comprises 18 Cambodian Sustainable Development Goals with 88 nationally relevant targets and 148 (global and locally-defined) indicators with 96 national indicators.4

Why does Cambodia have SDG18?

Cambodia faces very serious challenges around the landmines and ERW left behind after a protracted sequence of internal conflicts that affected the nation from the 1960s to late 1998.5 This has left Cambodia one of the world’s most heavily mine and ERW-contaminated nations.6 The characteristics of mine/ERW contamination in Cambodia are highly complex due to the civil war, the extensive period of open and secret armed conflicts and US bombardment, and a lack of information records of where landmines were laid.7

From 1979 to 2019, 64,843 people were killed or maimed as a result of mines/ERW, livelihoods and activities of communities were restricted and many infrastructure reconstructions and developments were hindered.8 For example, poor Cambodian households faced the dilemma of starvation or mine accident-led death. They were forced to take risks with mines/ERW because of economic necessity or they faced starvation if they were not willing to take risks, farming on the land and/or gathering forest produce in areas that may be contaminated by landmines. Government-sponsored research found that by 2005 approximately 2,300 villages had reported restricted access to neighboring communities, while significant numbers of villages reported restricted access to pagodas (1,487 villages), markets (1,334), health centers (1,312), and schools (affecting about 44,000 students).9 As a result, Cambodia has suffered severe socio-economic losses and the country has seen disastrous humanitarian consequences.10 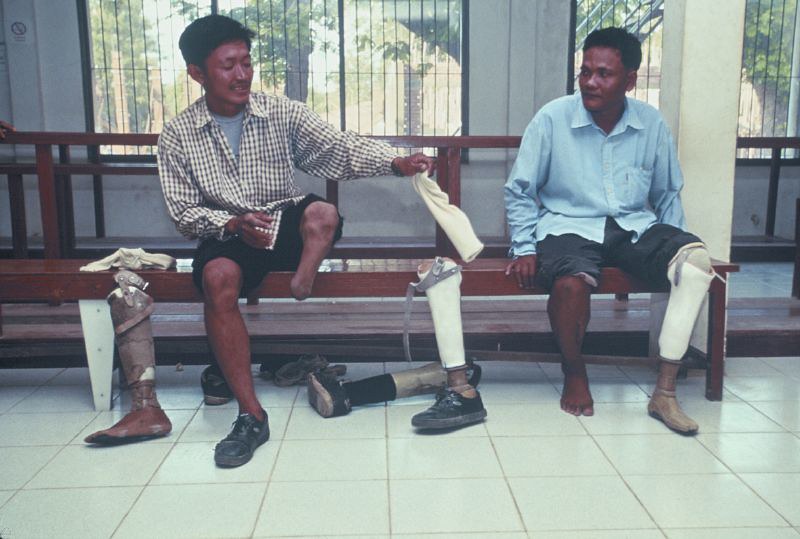 Acknowledging that one major constraint to development is the continued landmine/ERW contamination, the RGC added “De-mining, ERW and victim assistance” as the ninth Millennium Development Goal (CMDG9). It has now added a similar goal to the SDGs for Cambodia, CSDG18. Mine action is considered by the RGC as one of the top priorities for the rehabilitation and development of the country.11 The RGC adapted CSDG18 and managed the inclusion of mine action within its national development program, for instance, the Poverty Reduction Strategy (NPRS).12

With the addition of CMDG 9, the Royal Government of Cambodia committed itself to end the blight of landmines and unexploded ordnance on local communities. Two targets were outlined under this goal which was to reduce the number of resulting causalities and to progress the elimination of mine and ordnance contaminated land.13

With the transition of CMDG9 to CSDG18, Cambodia adopted 3 targets and 6 indicators to be achieved by 2030 in its sustainable development framework.14 CSDG18 does not only aim to clear land mines and EWR but also to promote victim assistance as Table 2 indicates.15

Table 2 Targets and indicators for CSDG 18

Cambodia began its mine-clearance activities during the period of the United Nations Transitional Authority of Cambodia (UNTAC).16 Between 1991–1992, the UN Advance Mission for Cambodia (UNAMIC) contracted the HALO Trust to survey 700 km² of land in Battambang province. In March 1992, UNTAC took over UNAMIC’s mission and functions, including assisting mine clearance and mine awareness activities. Later in July 1992, UNTAC set up the Mine Clearance Training Unit (MCTU) and started to teach Cambodian nationals to identify, locate and destroy landmines, and to mark minefields.17

The Cambodian Mine Action Centre (CMAC) was also established in 1992, with a mandate to conduct mine clearance and mine risk education. United Nations Development Program (UNDP) and United Nations Office for Project Services began to provide technical and financial support to CMAC through a UN Trust Fund for Demining in Cambodia following UNTAC’s withdrawal in 1993. In 1995, CMAC had become an efficient, autonomous organization whose coordination role encouraged healthy competition between operators and a high level of cooperation between all organizations involved in mine action. However, CMAC’s management model—both mine action center and a mine action authority – was eventually found to be too clumsy and unmanageable. Several allegations of corruption, mismanagement and nepotism surfaced in 1999. As a result, a large number of CMAC managers and staff were demoted, moved to other positions or simply resigned.18 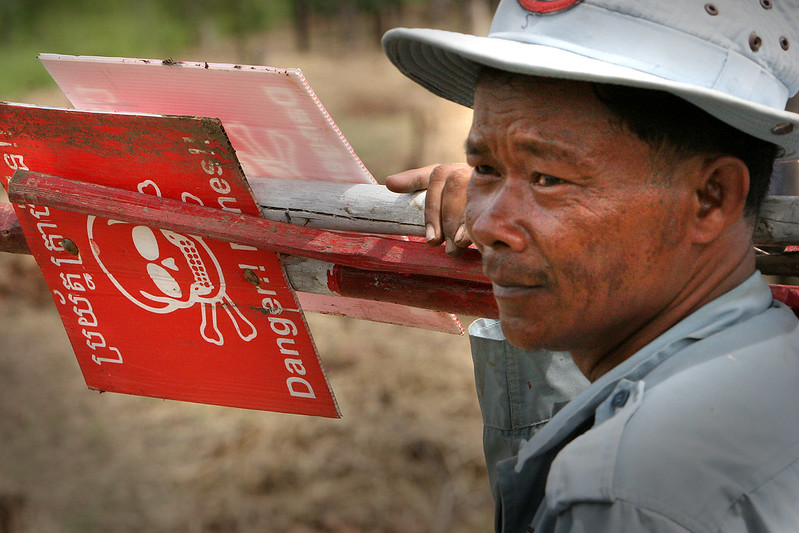 To ensure effective management and accountability of the mine action sector, the RGC established the Cambodian Mine Action and Victim Assistance Authority (CMAA) under Royal Decree No. 177 on 6 September 2000.19 The role of CMAA is to regulate, coordinate and monitor mine action activities throughout Cambodia. The sector consists of two national operators namely CMAC and NPMEC (National Center for Peacekeeping Forces, Mines and ERW Clearance), and international operators including MAG (Mines Advisory Group), HALO Trust, NPA (Norwegian People’s Aid), JMAS (Japan Mine Action Service), APOPO (a Dutch organization) and CSHD (Cambodia Self Help Demining), along with other mine risk education and victims assistance actors. Cambodia has also sent its de-miners to affected countries as part of United Nations Peacekeeping Operations and has assisted other mine/ERW affected countries.20

Cambodia has achieved progress on mine and ERW clearance although the actual achievements are lower than planned. Table 3 shows the progress made between 2015 and 2019.21

Table 4 shows the National Mine Action Strategy clearance projection to be achieved by 2025. However, on top of the existing 2,500 de-miners, Cambodia needs another 2,000 de-miners to achieve its target of releasing contaminated landmine/ERW by 2025. 22 The Cambodian Government has permitted the Cambodian Mine Action and Victim Assistance Authority (CMAA) to access funds to deploy 2,000 Royal Cambodian Armed Forces (RCAF) personnel in the humanitarian demining operation from 2020–2025.23 In terms of financing, the total financial requirement for the 2018–2025 landmine clearance plan is US$ 406 million for the remaining contaminated land.24

Source: National mine action strategy clearance projection to be achieved by 2025

As stated in the National Strategic Development Plan (2019–2013), education about mines and ERW is one of the five pillars of action in this field.25 Mine education awareness activities started in Cambodia in 1993. Initial activities mainly focused on returnees and internally displaced persons who often settled in heavily contaminated areas. The purpose was that a community-based and multi-disciplinary approach to mine action would decrease the number of mine and ERW casualties by enabling people to live more safely in contaminated environments. CMAC implemented the project in October 2001 with technical assistance from HI (Handicap International) and funding from UNICEF.26 Mine victim assistance is also part of the large disability and rehabilitation program. It has been delegated to the Ministry of Social Affairs, Veteran and Youth Rehabilitation (MoSVY), which is supposed to provide physical rehabilitation and socio-reintegration services to all people with disabilities (PWD) in Cambodia. Meanwhile, the landmines/ERW Victim Information Surveillance (VIS) system is managed by the Cambodia Mine/ERW Victim Information System (CMVIS) under CMAA.27